Презентация «The United Kingdom of Great Britain and Nothern Ireland» 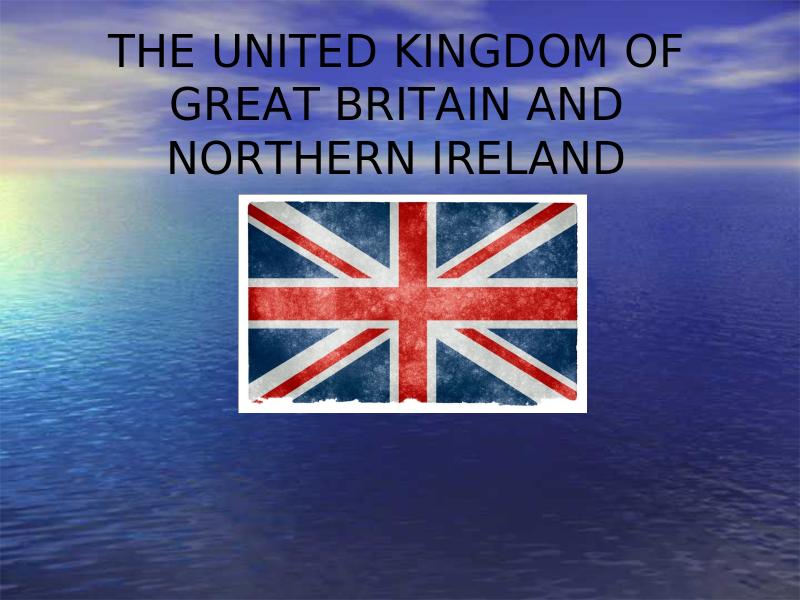 THE UNITED KINGDOM OF GREAT BRITAIN AND NORTHERN IRELAND 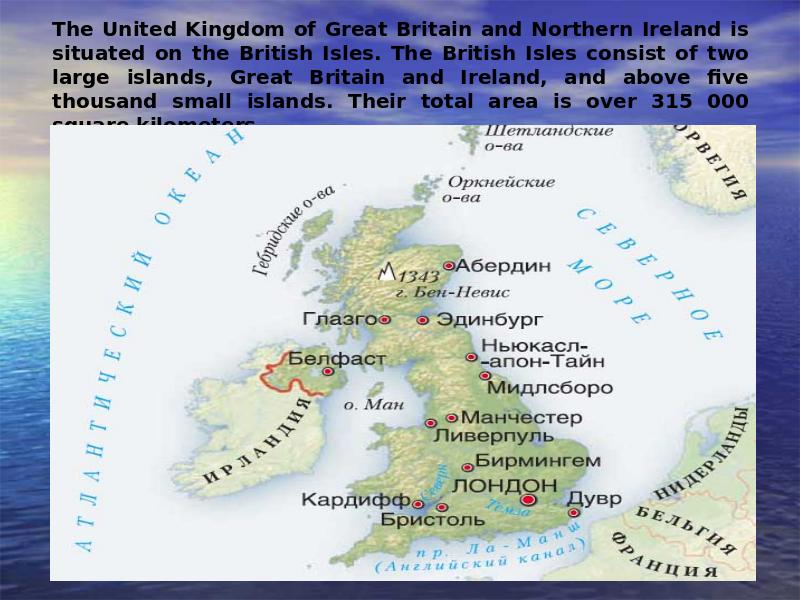 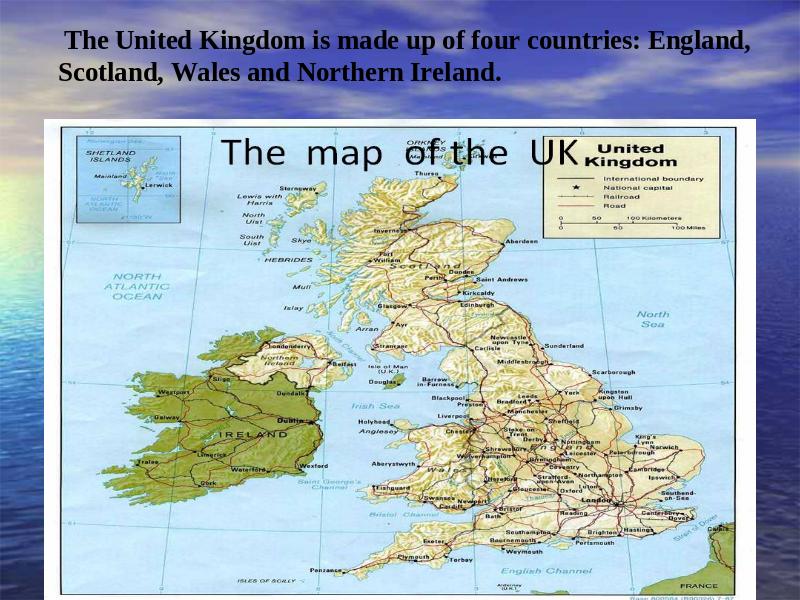 The United Kingdom is made up of four countries: England, Scotland, Wales and Northern Ireland. 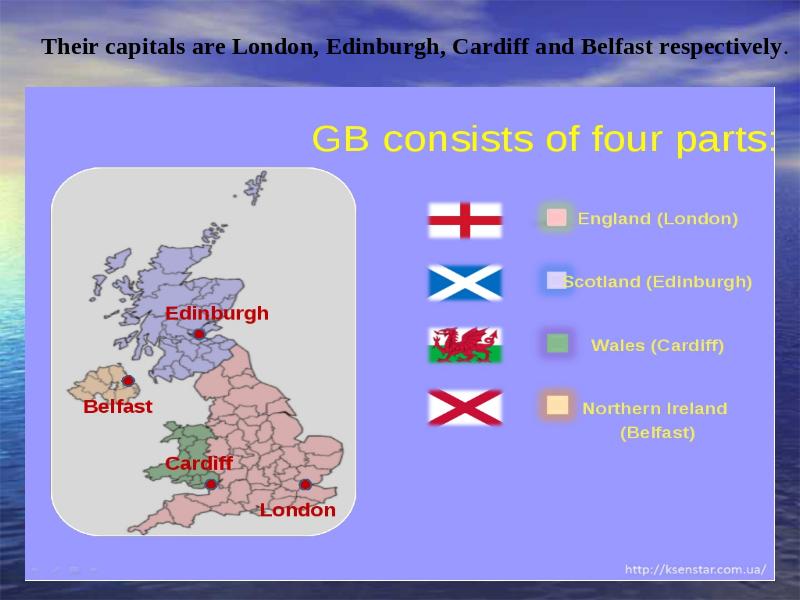 Their capitals are London, Edinburgh, Cardiff and Belfast respectively. 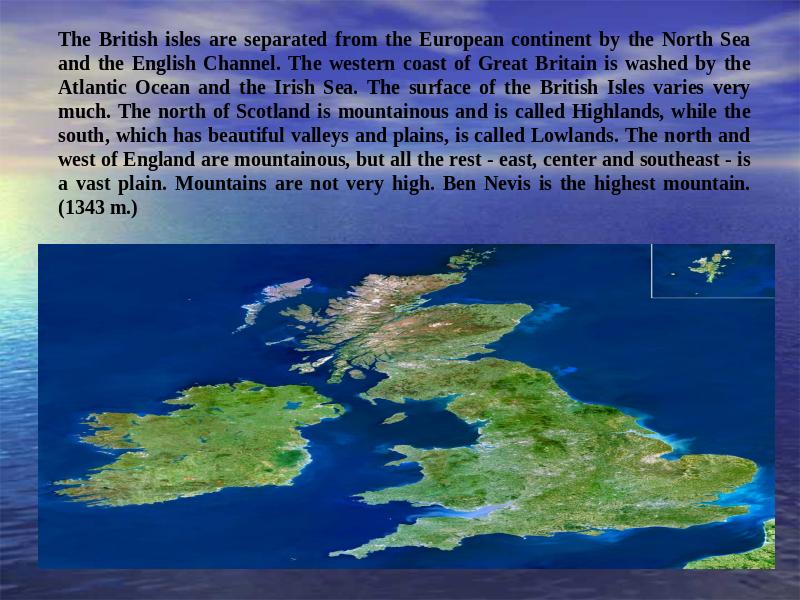 The British isles are separated from the European continent by the North Sea and the English Channel. The western coast of Great Britain is washed by the Atlantic Ocean and the Irish Sea. The surface of the British Isles varies very much. The north of Scotland is mountainous and is called Highlands, while the south, which has beautiful valleys and plains, is called Lowlands. The north and west of England are mountainous, but all the rest - east, center and southeast - is a vast plain. Mountains are not very high. Ben Nevis is the highest mountain. (1343 m.) 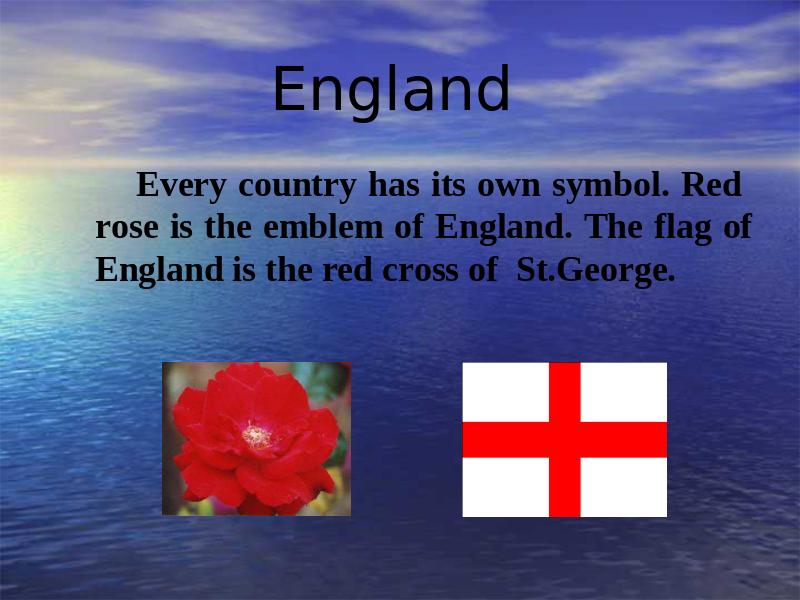 England Every country has its own symbol. Red rose is the emblem of England. The flag of England is the red cross of St.George. 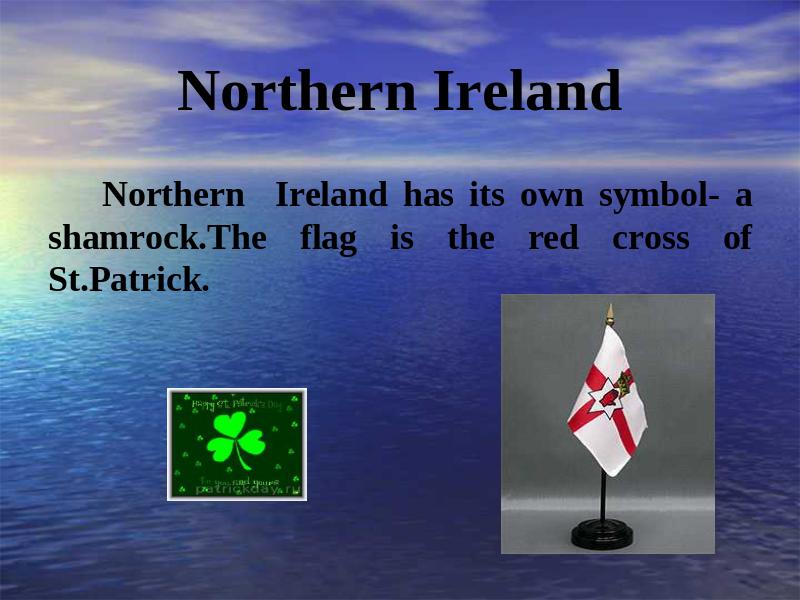 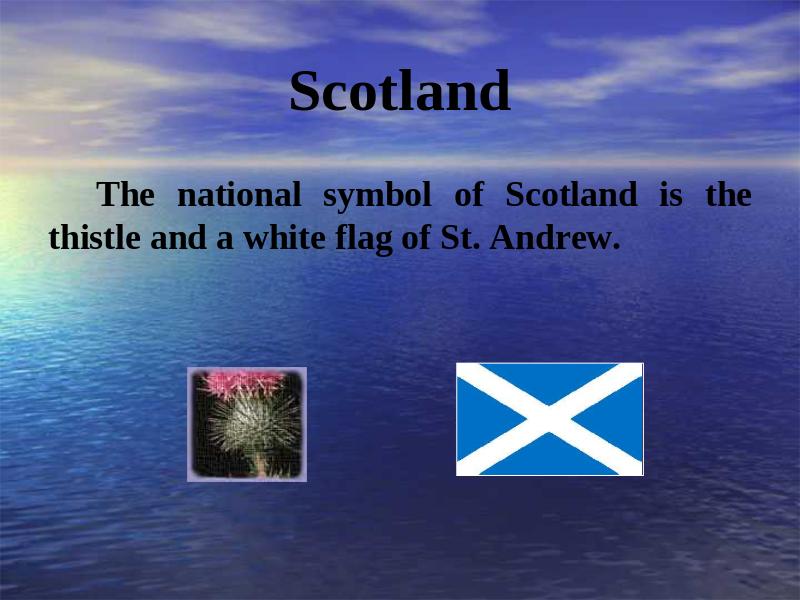 Scotland The national symbol of Scotland is the thistle and a white flag of St. Andrew. 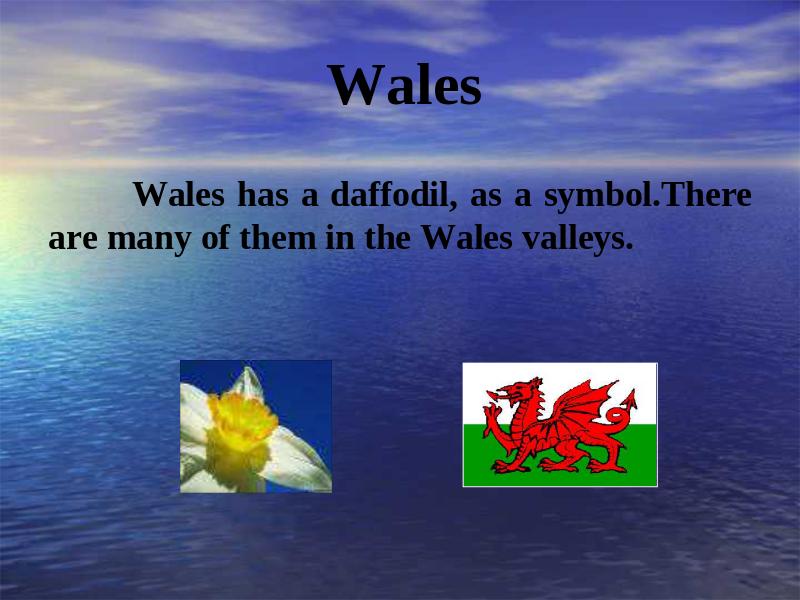 Wales Wales has a daffodil, as a symbol.There are many of them in the Wales valleys. 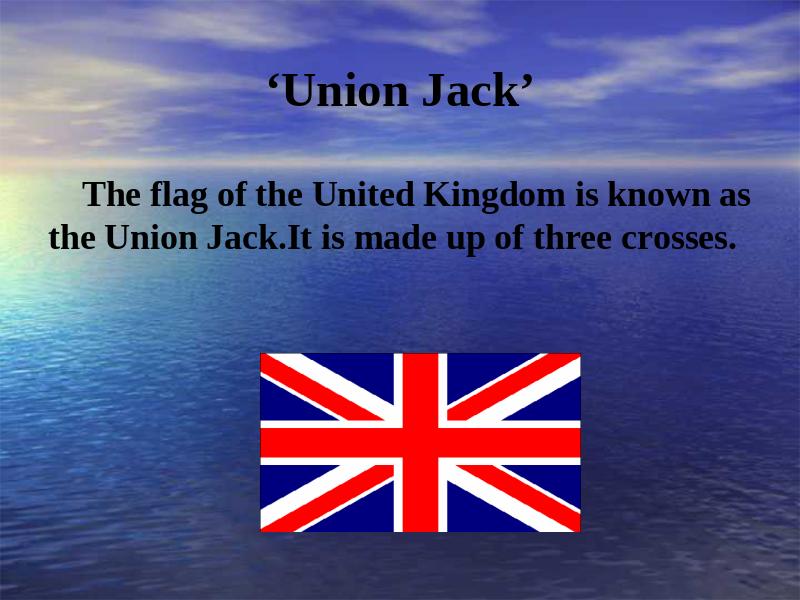 ‘Union Jack’ The flag of the United Kingdom is known as the Union Jack.It is made up of three crosses. 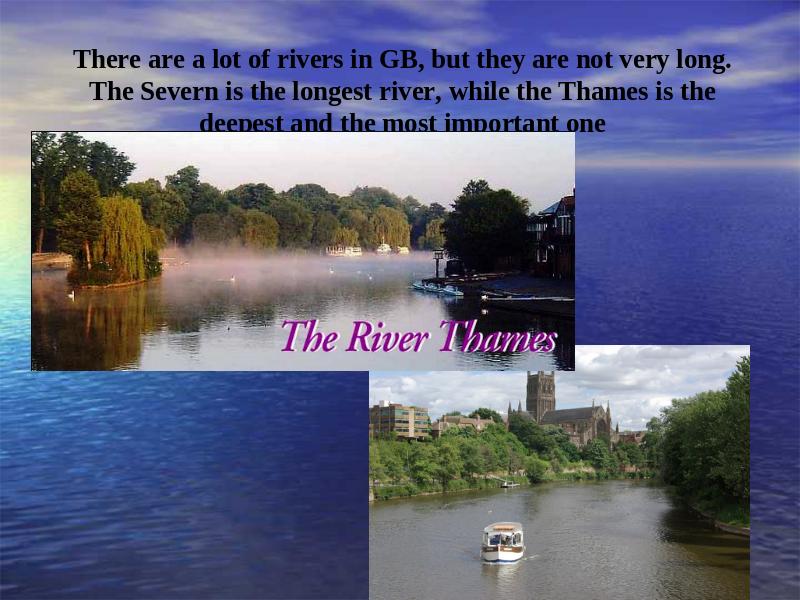 There are a lot of rivers in GB, but they are not very long. The Severn is the longest river, while the Thames is the deepest and the most important one 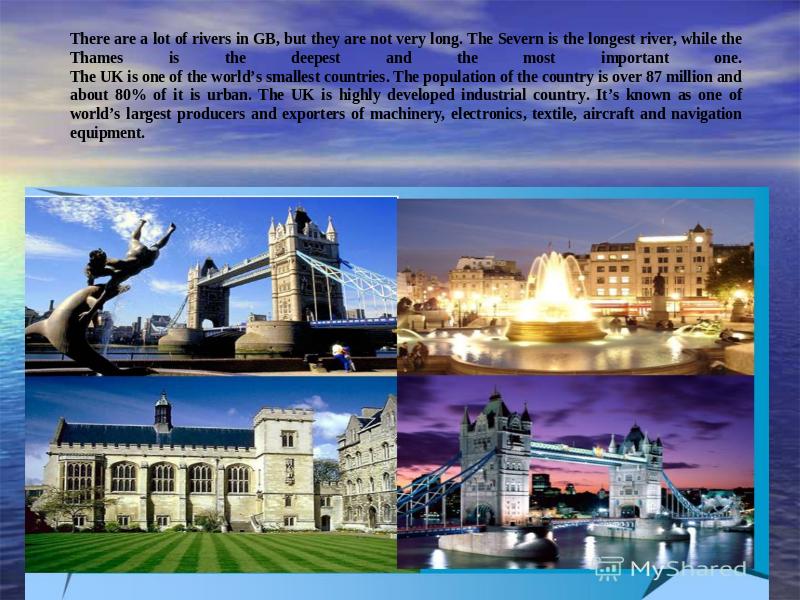 There are a lot of rivers in GB, but they are not very long. The Severn is the longest river, while the Thames is the deepest and the most important one. The UK is one of the world’s smallest countries. The population of the country is over 87 million and about 80% of it is urban. The UK is highly developed industrial country. It’s known as one of world’s largest producers and exporters of machinery, electronics, textile, aircraft and navigation equipment. 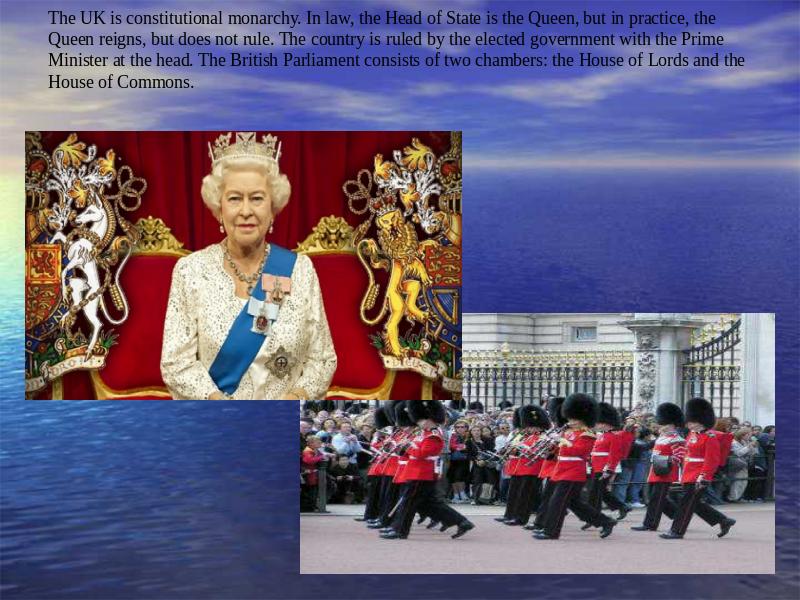 The UK is constitutional monarchy. In law, the Head of State is the Queen, but in practice, the Queen reigns, but does not rule. The country is ruled by the elected government with the Prime Minister at the head. The British Parliament consists of two chambers: the House of Lords and the House of Commons. 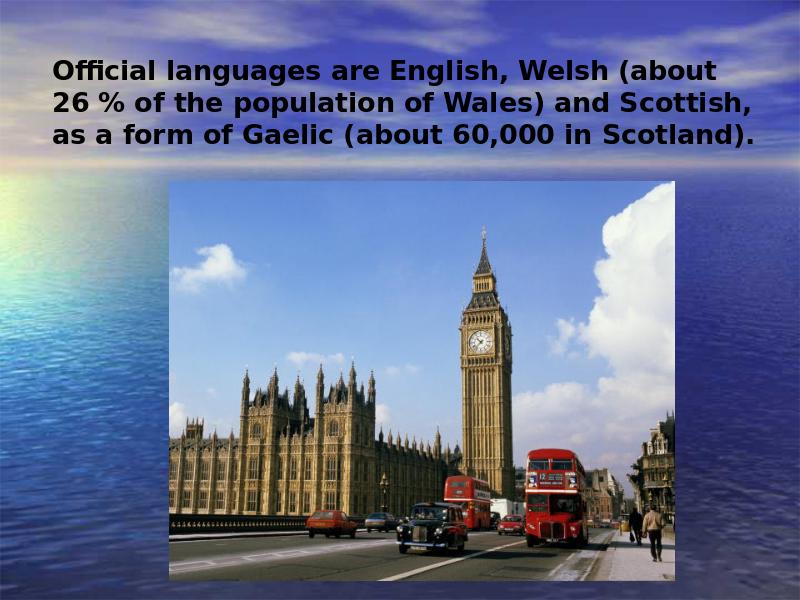 Official languages are English, Welsh (about 26 % of the population of Wales) and Scottish, as a form of Gaelic (about 60,000 in Scotland). 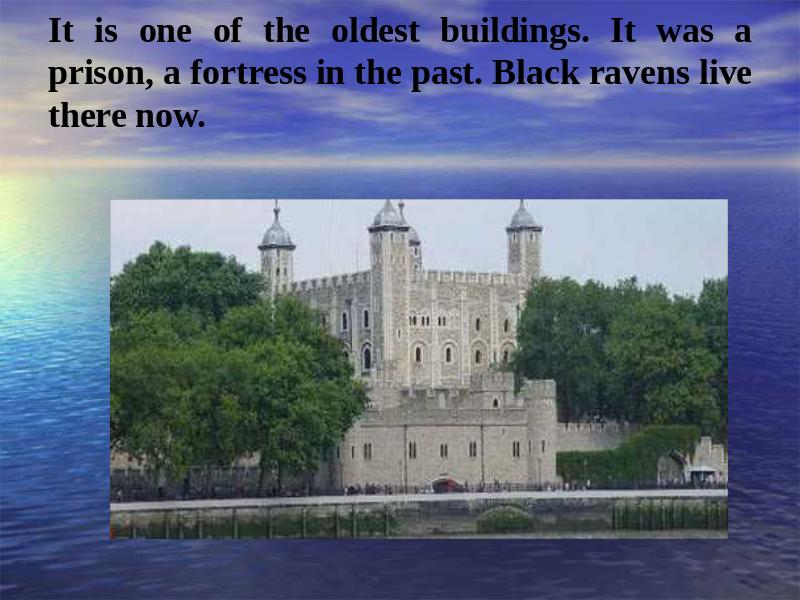 It is one of the oldest buildings. It was a prison, a fortress in the past. Black ravens live there now. 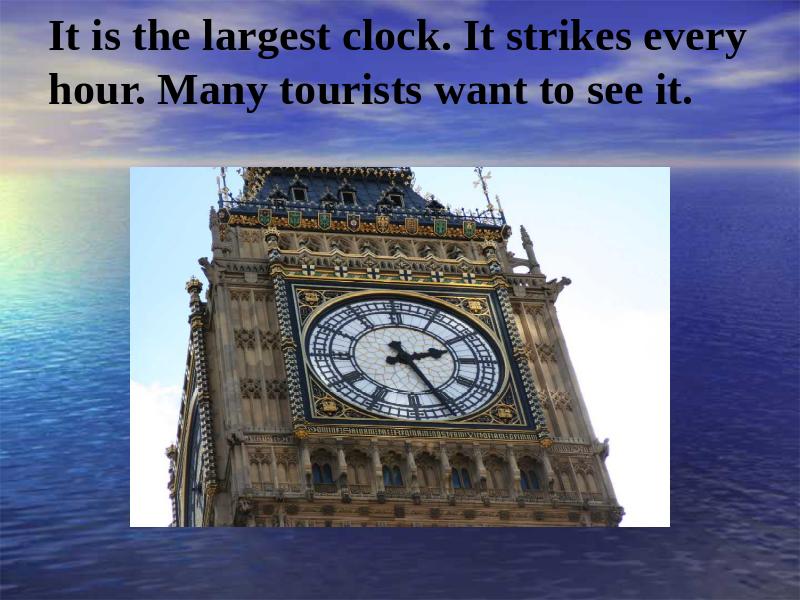 It is the largest clock. It strikes every hour. Many tourists want to see it. 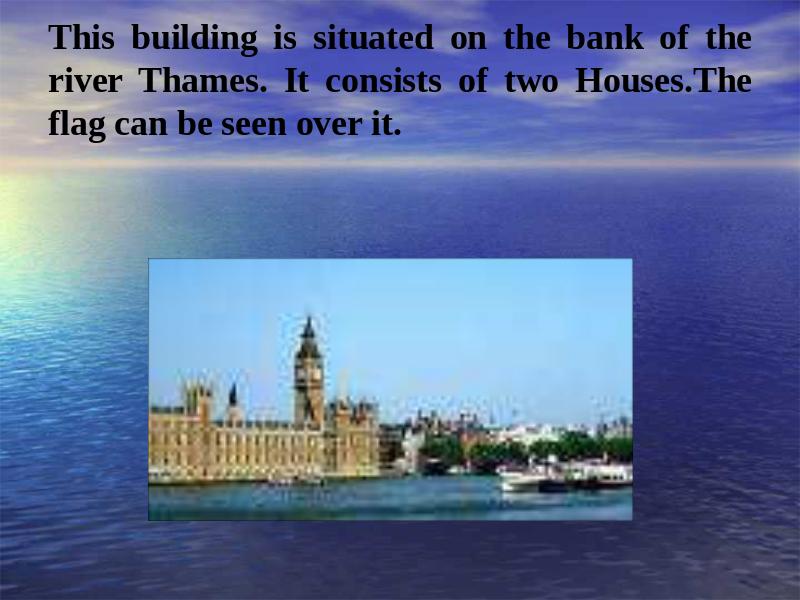 This building is situated on the bank of the river Thames. It consists of two Houses.The flag can be seen over it. 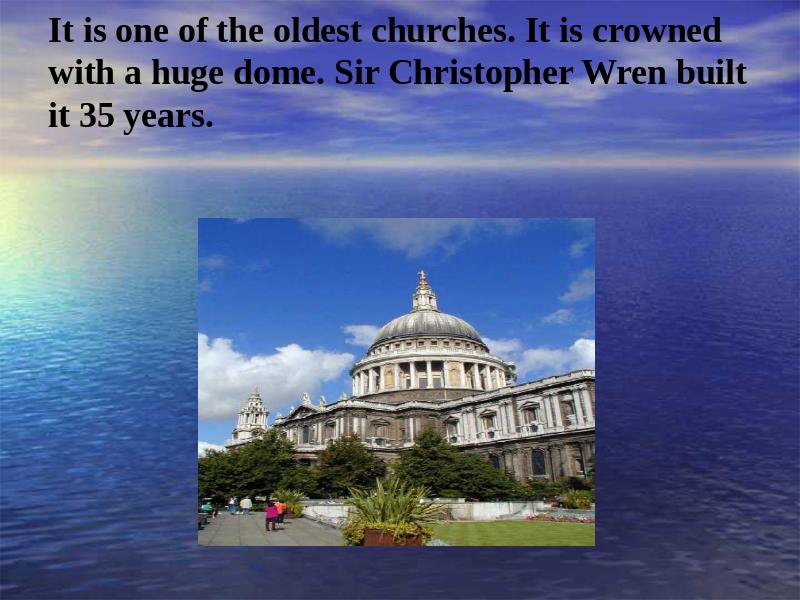 It is one of the oldest churches. It is crowned with a huge dome. Sir Christopher Wren built it 35 years.