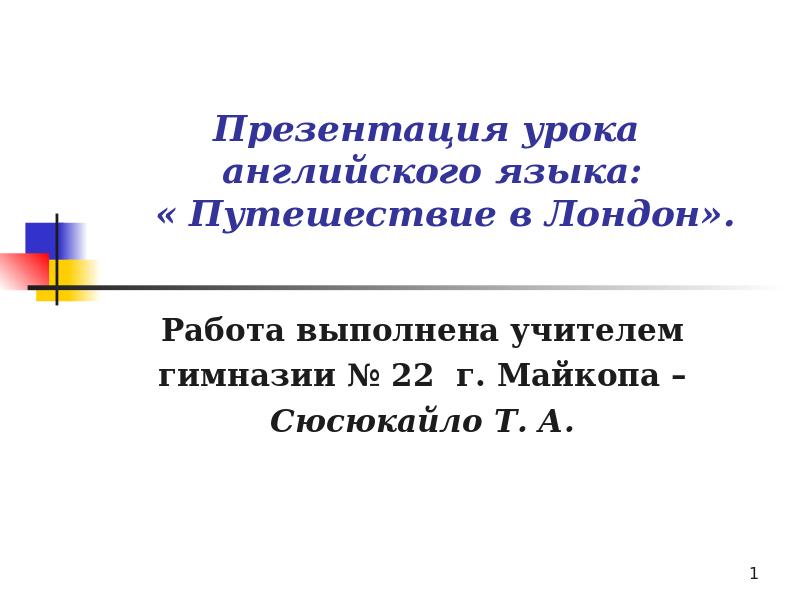 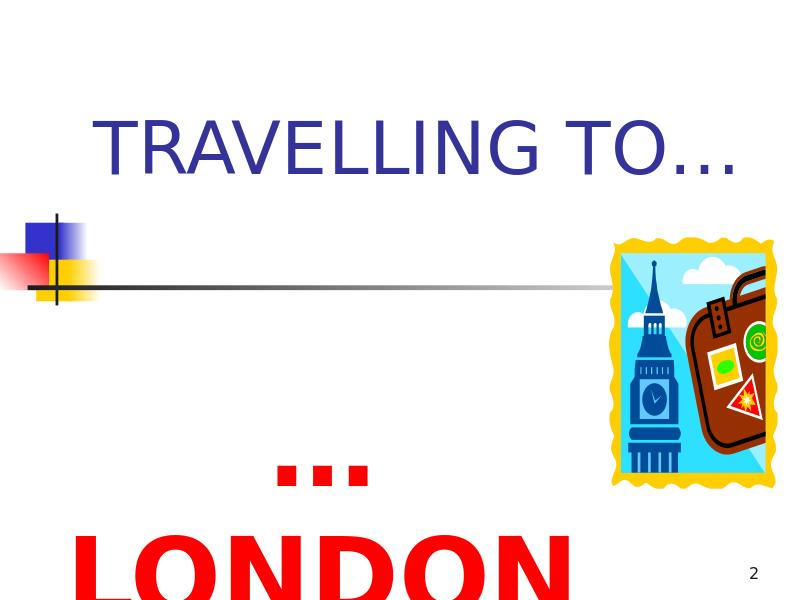 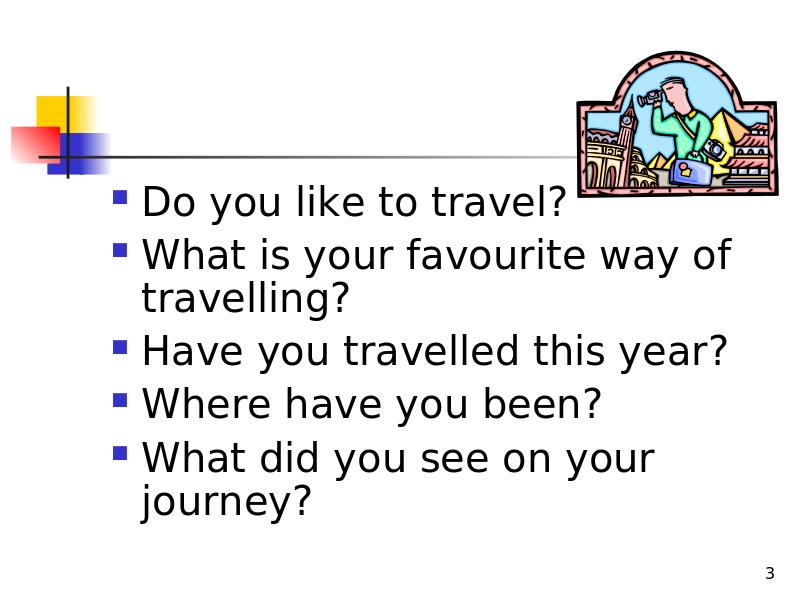 Do you like to travel? What is your favourite way of travelling? Have you travelled this year? Where have you been? What did you see on your journey? 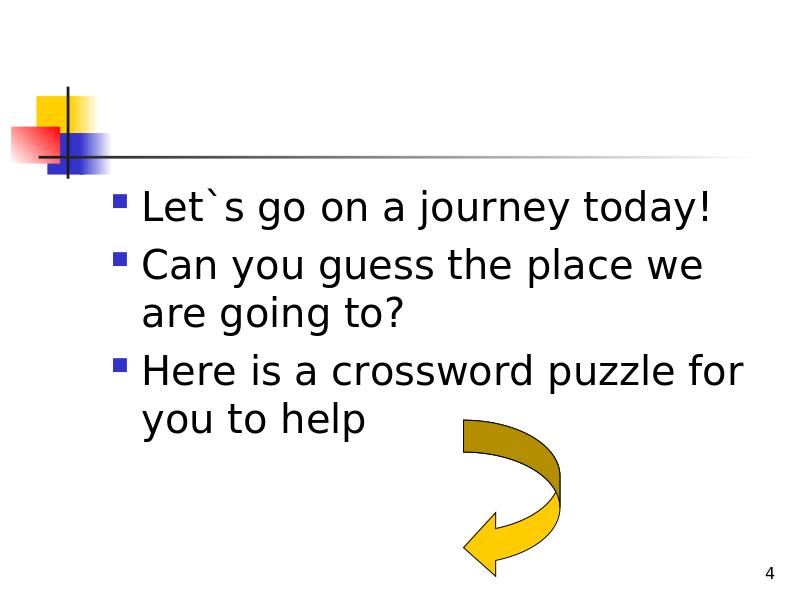 Let`s go on a journey today! Can you guess the place we are going to? Here is a crossword puzzle for you to help 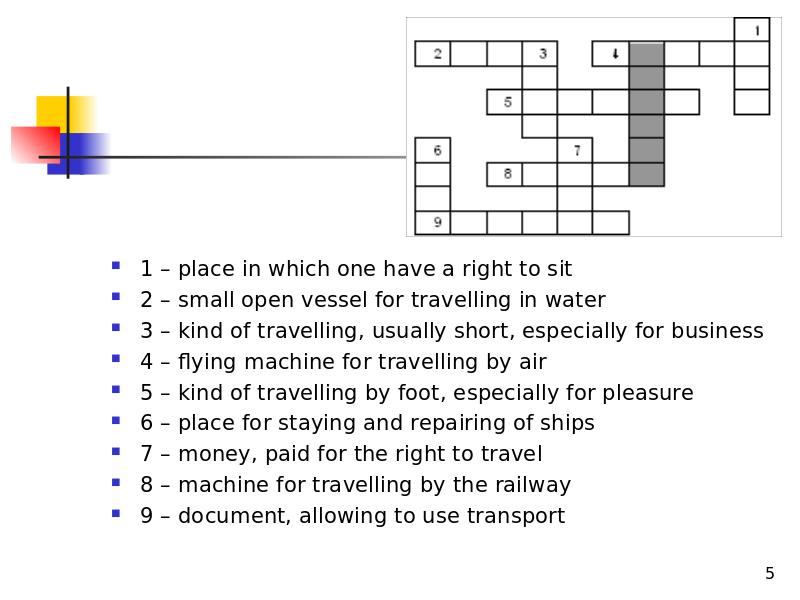 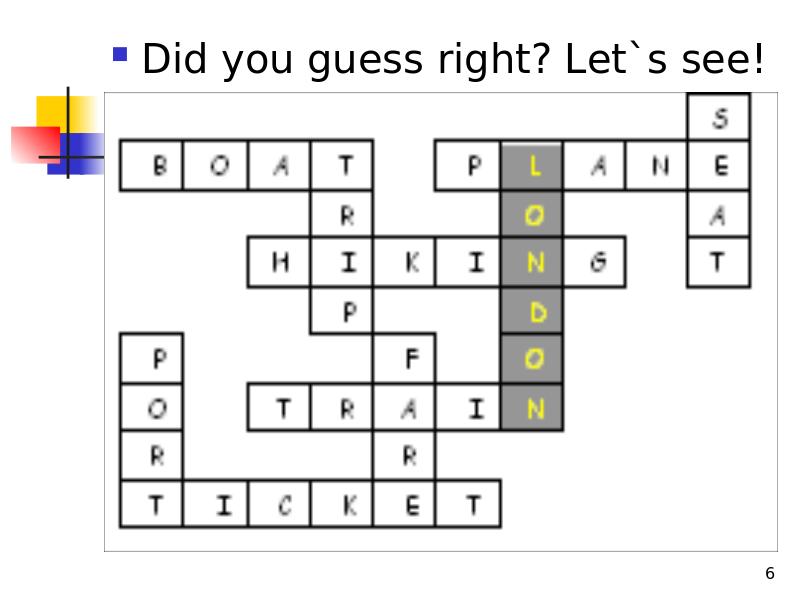 Did you guess right? Let`s see! 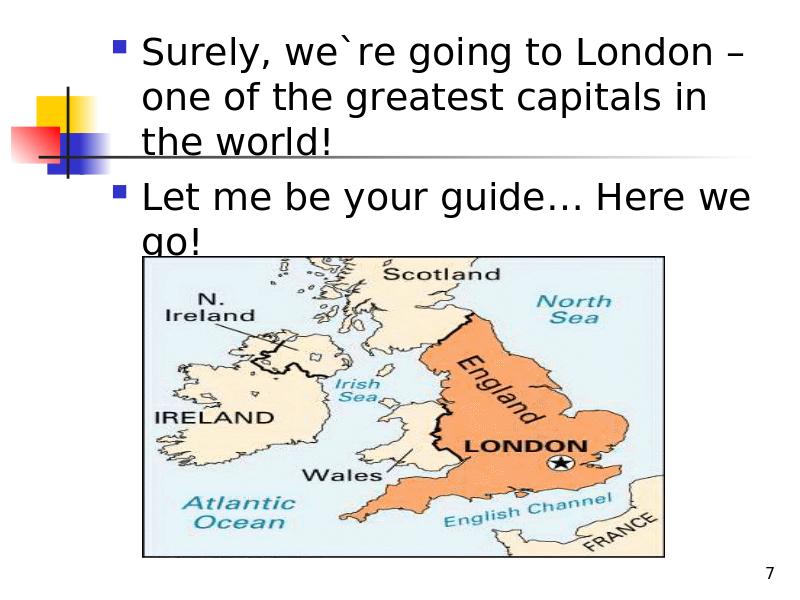 Surely, we`re going to London – one of the greatest capitals in the world! Let me be your guide… Here we go! 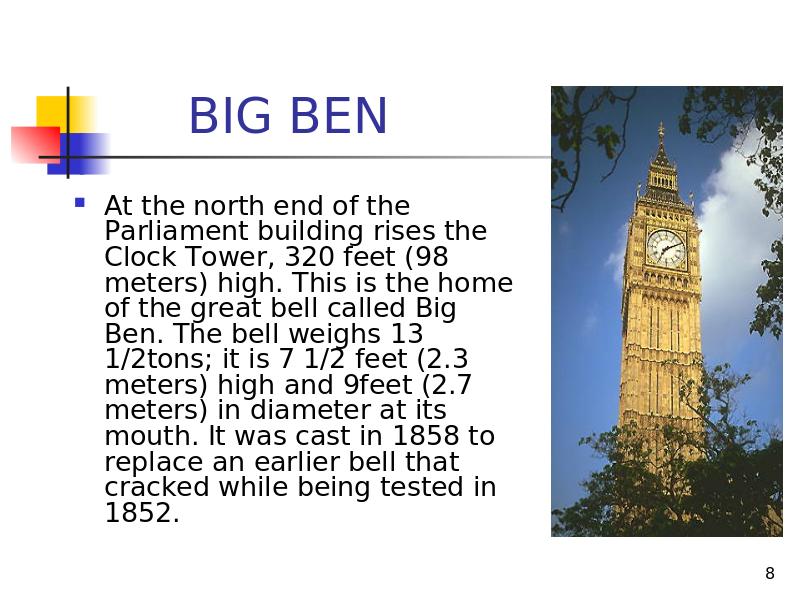 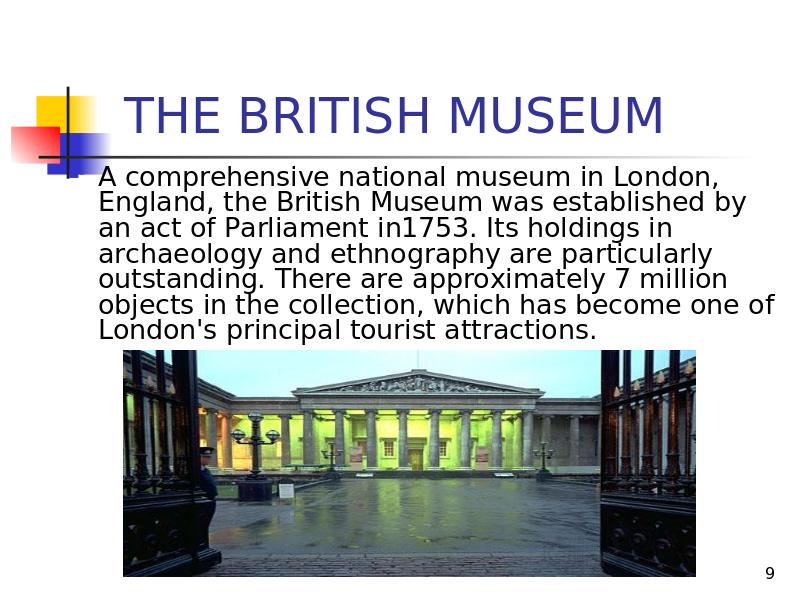 THE BRITISH MUSEUM A comprehensive national museum in London, England, the British Museum was established by an act of Parliament in1753. Its holdings in archaeology and ethnography are particularly outstanding. There are approximately 7 million objects in the collection, which has become one of London's principal tourist attractions. 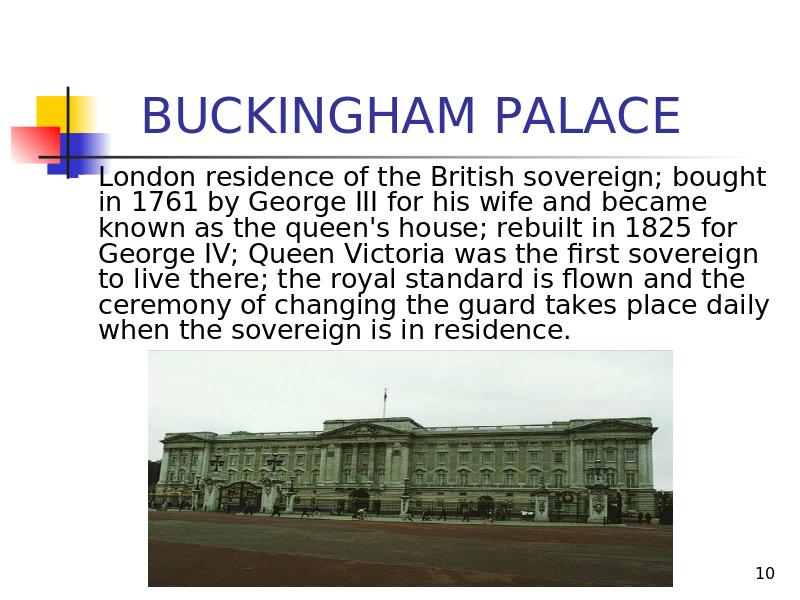 BUCKINGHAM PALACE London residence of the British sovereign; bought in 1761 by George III for his wife and became known as the queen's house; rebuilt in 1825 for George IV; Queen Victoria was the first sovereign to live there; the royal standard is flown and the ceremony of changing the guard takes place daily when the sovereign is in residence. 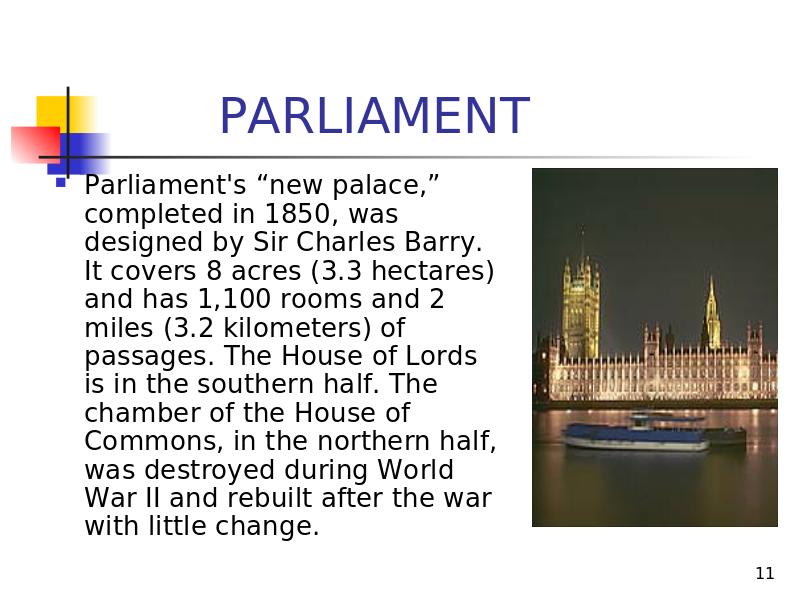 PARLIAMENT Parliament's “new palace,” completed in 1850, was designed by Sir Charles Barry. It covers 8 acres (3.3 hectares) and has 1,100 rooms and 2 miles (3.2 kilometers) of passages. The House of Lords is in the southern half. The chamber of the House of Commons, in the northern half, was destroyed during World War II and rebuilt after the war with little change. 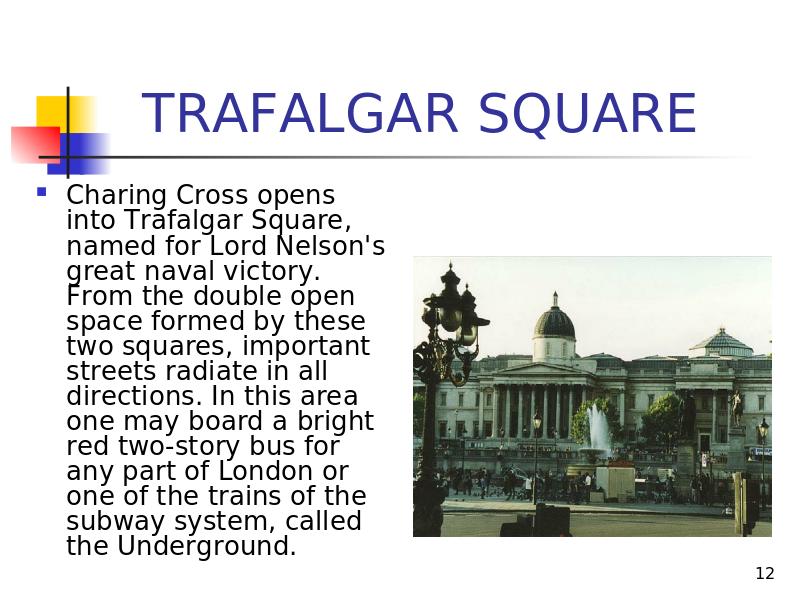 TRAFALGAR SQUARE Charing Cross opens into Trafalgar Square, named for Lord Nelson's great naval victory. From the double open space formed by these two squares, important streets radiate in all directions. In this area one may board a bright red two-story bus for any part of London or one of the trains of the subway system, called the Underground. 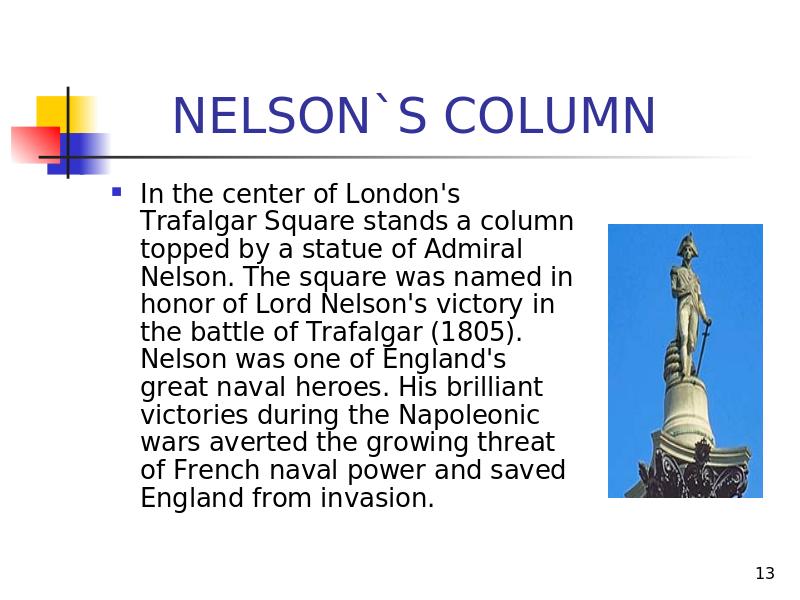 NELSON`S COLUMN In the center of London's Trafalgar Square stands a column topped by a statue of Admiral Nelson. The square was named in honor of Lord Nelson's victory in the battle of Trafalgar (1805). Nelson was one of England's great naval heroes. His brilliant victories during the Napoleonic wars averted the growing threat of French naval power and saved England from invasion. 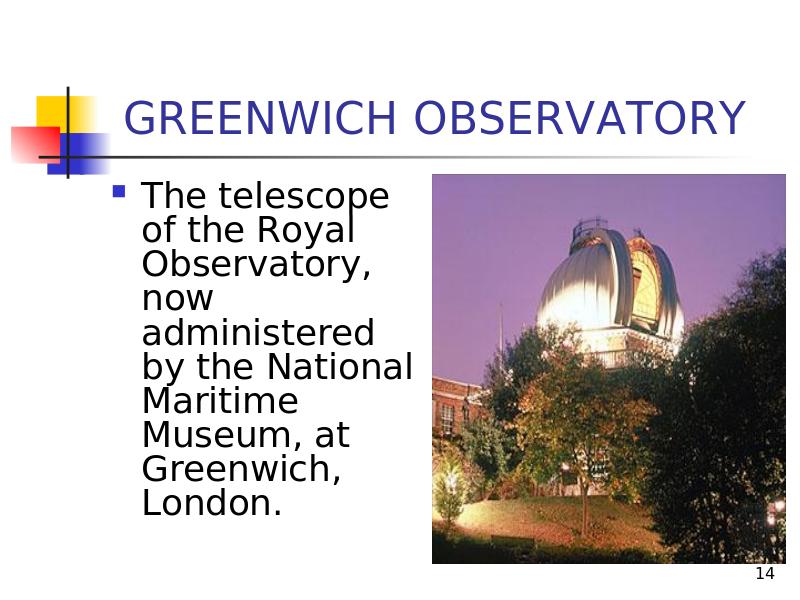 GREENWICH OBSERVATORY The telescope of the Royal Observatory, now administered by the National Maritime Museum, at Greenwich, London. 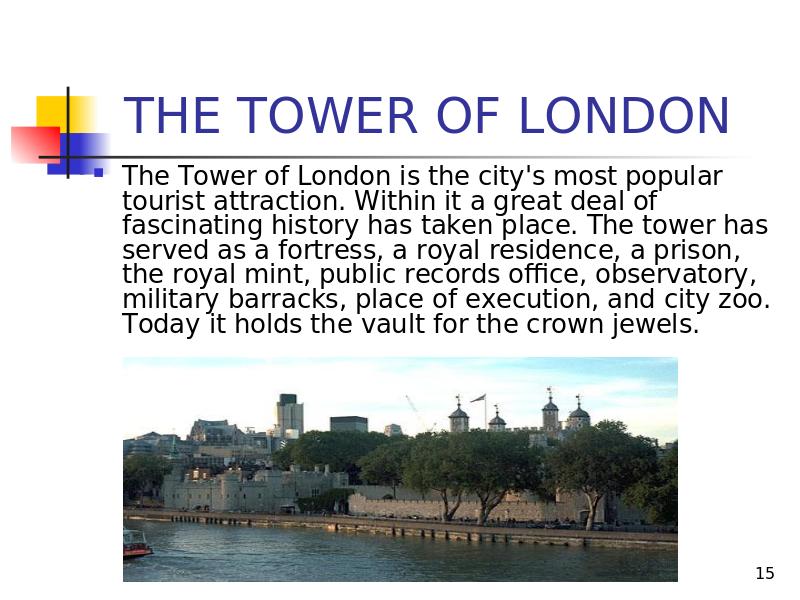 THE TOWER OF LONDON The Tower of London is the city's most popular tourist attraction. Within it a great deal of fascinating history has taken place. The tower has served as a fortress, a royal residence, a prison, the royal mint, public records office, observatory, military barracks, place of execution, and city zoo. Today it holds the vault for the crown jewels. 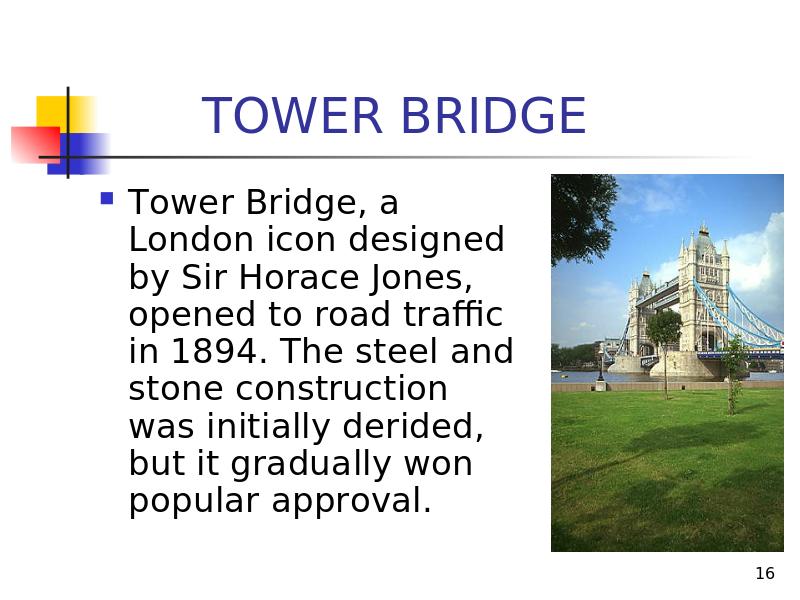 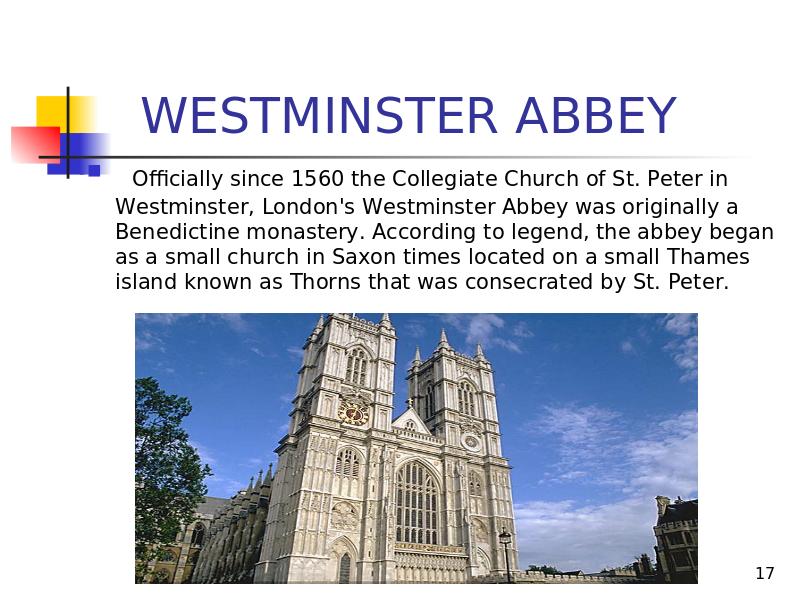 WESTMINSTER ABBEY  Officially since 1560 the Collegiate Church of St. Peter in Westminster, London's Westminster Abbey was originally a Benedictine monastery. According to legend, the abbey began as a small church in Saxon times located on a small Thames island known as Thorns that was consecrated by St. Peter. 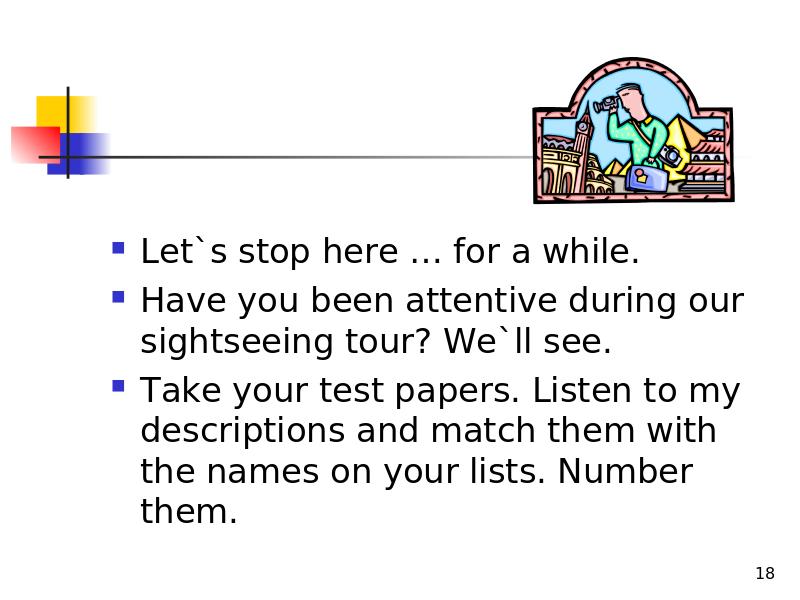 Let`s stop here … for a while. Have you been attentive during our sightseeing tour? We`ll see. Take your test papers. Listen to my descriptions and match them with the names on your lists. Number them. 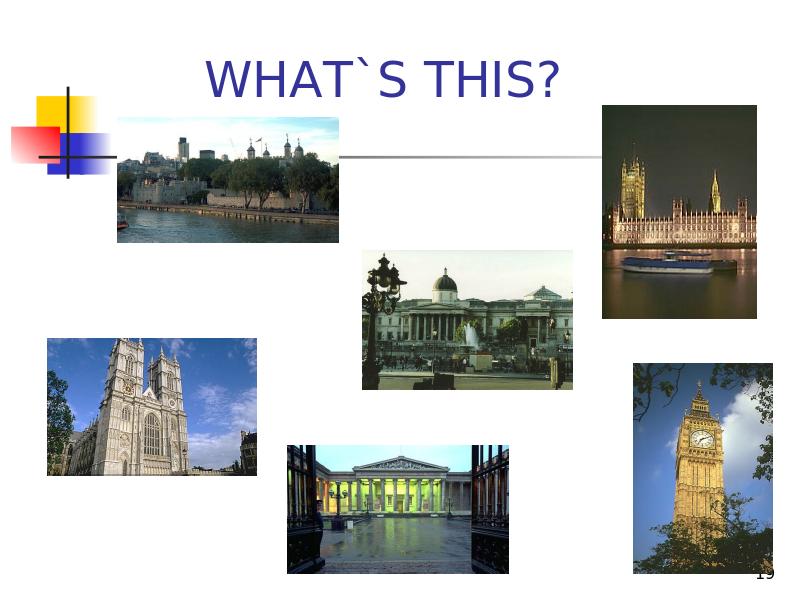