Урок-презентация «The 12th of April is Cosmonautics Day» 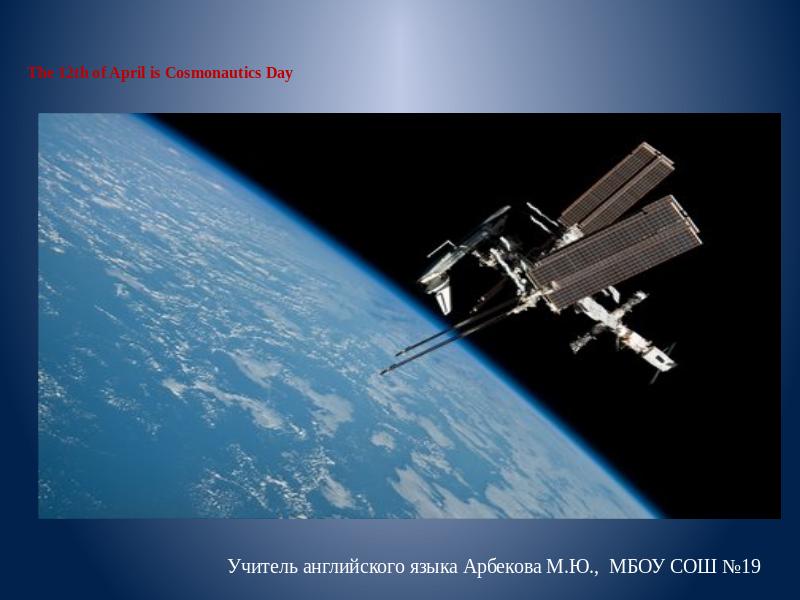 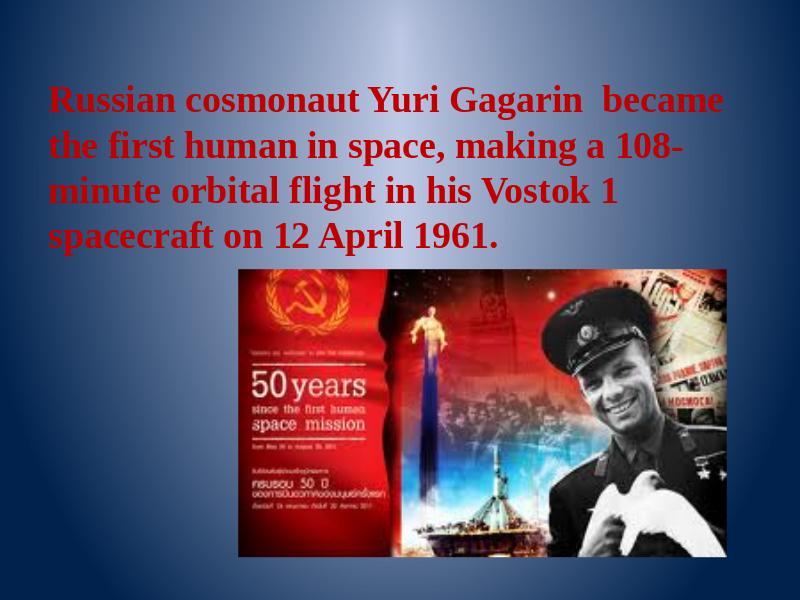 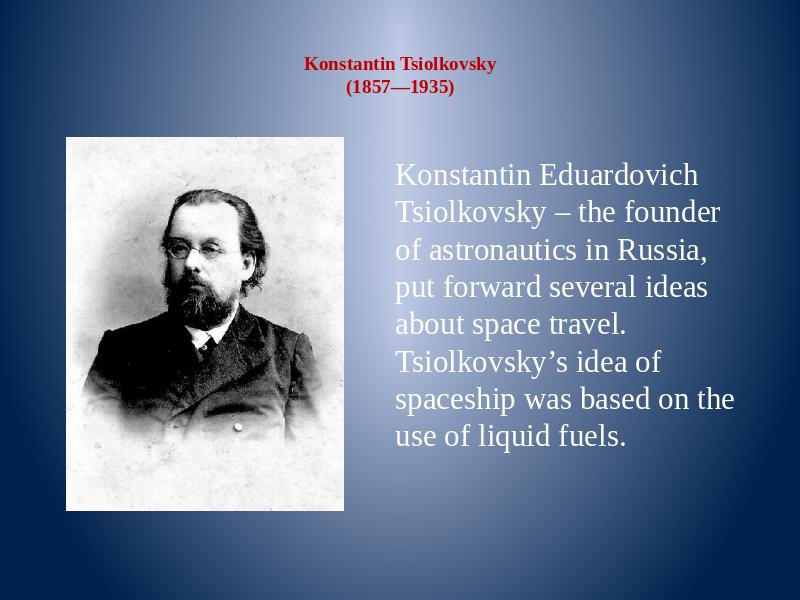 Konstantin Tsiolkovsky (1857—1935) Konstantin Eduardovich Tsiolkovsky – the founder of astronautics in Russia, put forward several ideas about space travel. Tsiolkovsky’s idea of spaceship was based on the use of liquid fuels. 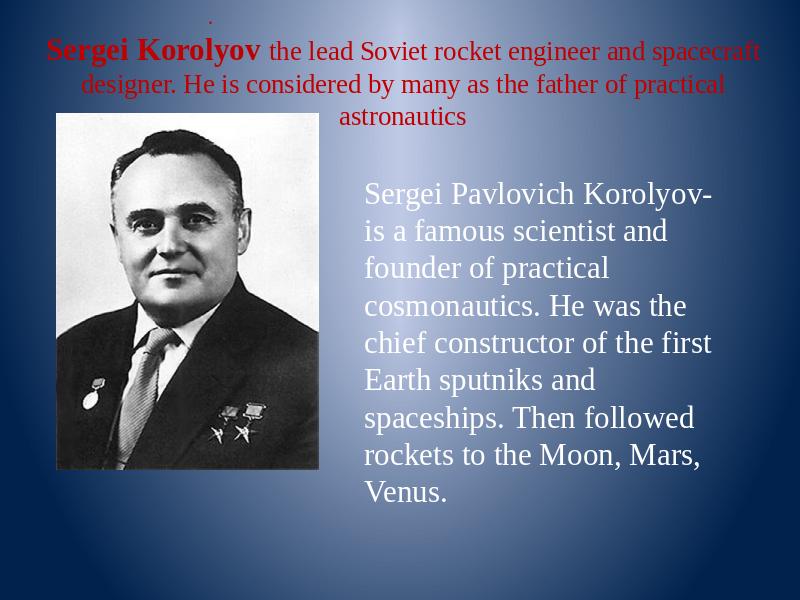 Sergei Korolyov the lead Soviet rocket engineer and spacecraft designer. He is considered by many as the father of practical astronautics Sergei Pavlovich Korolyov- is a famous scientist and founder of practical cosmonautics. He was the chief constructor of the first Earth sputniks and spaceships. Then followed rockets to the Moon, Mars, Venus. . 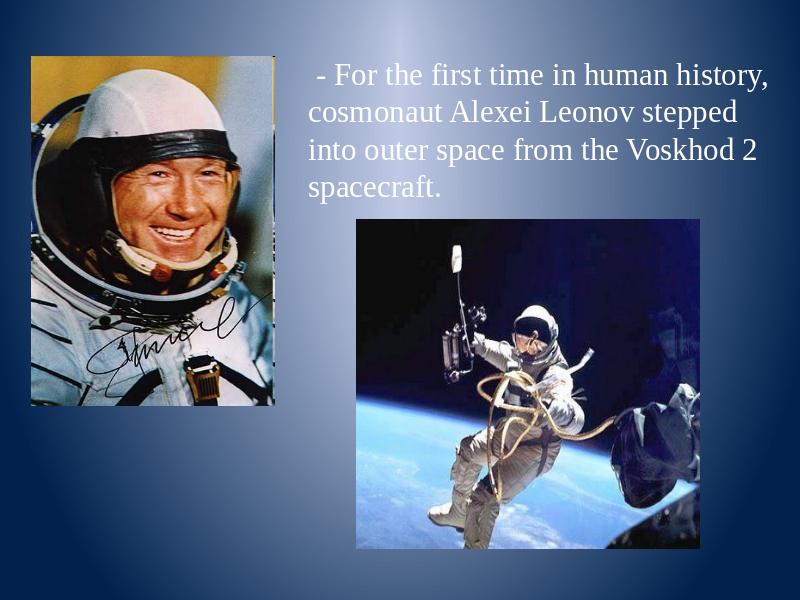 - For the first time in human history, cosmonaut Alexei Leonov stepped into outer space from the Voskhod 2 spacecraft. 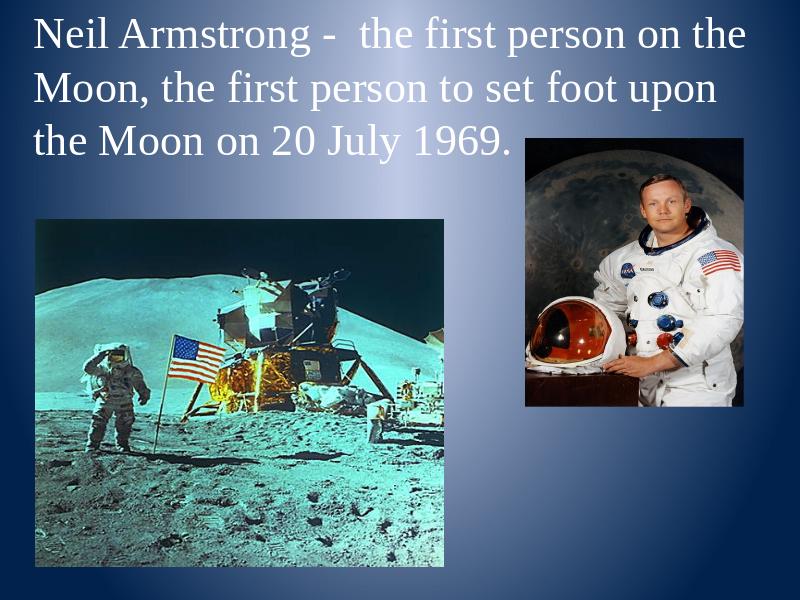 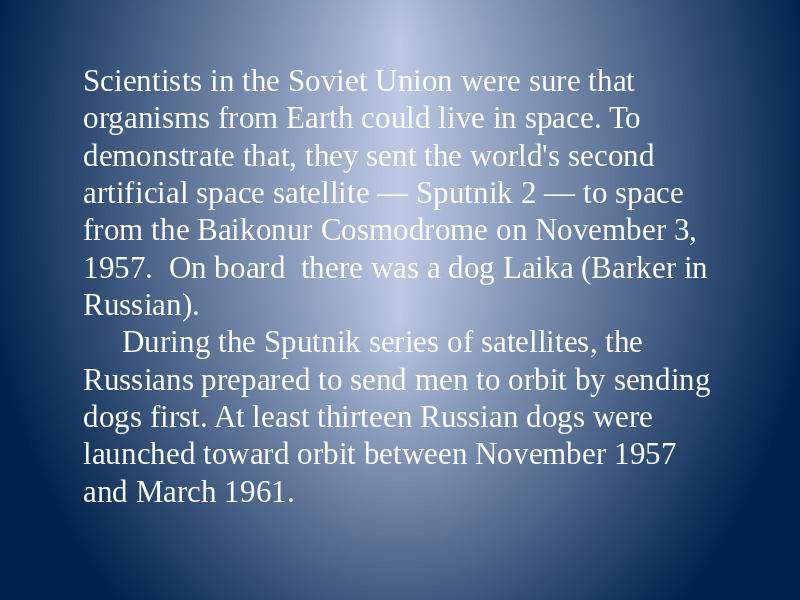 Scientists in the Soviet Union were sure that organisms from Earth could live in space. To demonstrate that, they sent the world's second artificial space satellite — Sputnik 2 — to space from the Baikonur Cosmodrome on November 3, 1957. On board there was a dog Laika (Barker in Russian). During the Sputnik series of satellites, the Russians prepared to send men to orbit by sending dogs first. At least thirteen Russian dogs were launched toward orbit between November 1957 and March 1961. 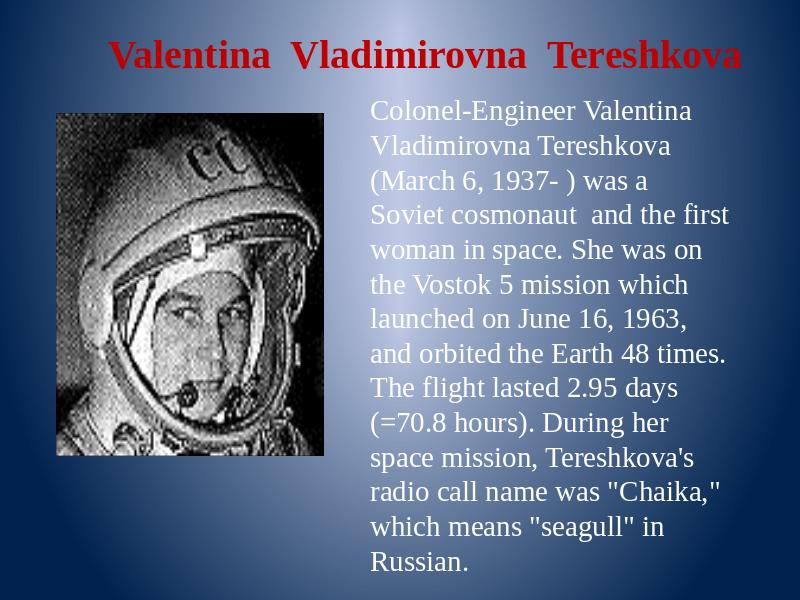 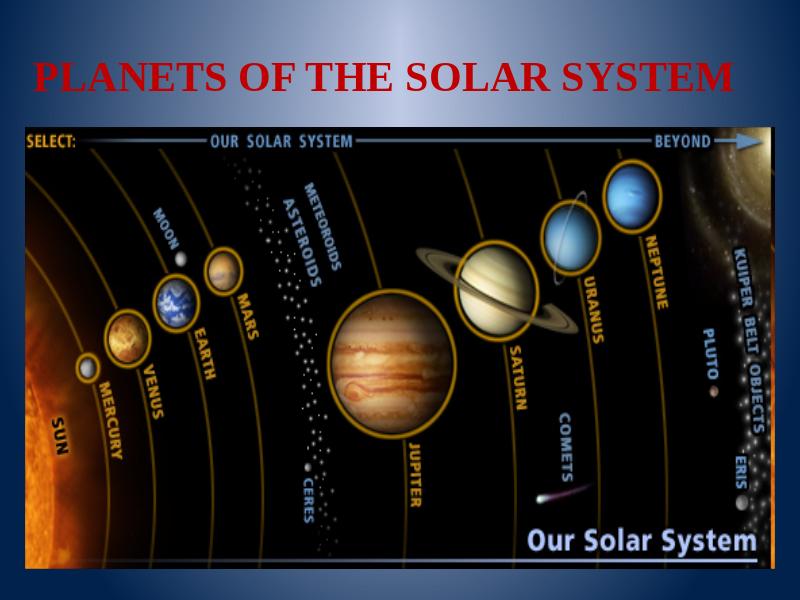 PLANETS OF THE SOLAR SYSTEM 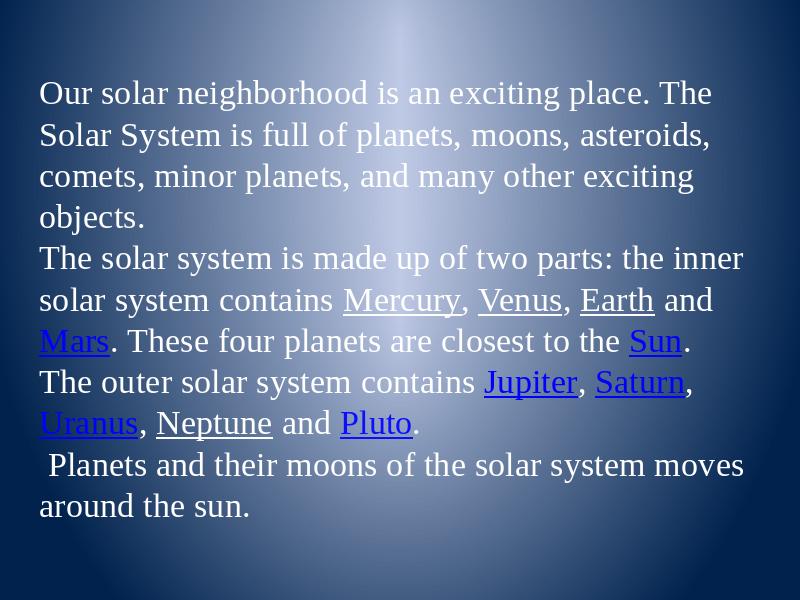 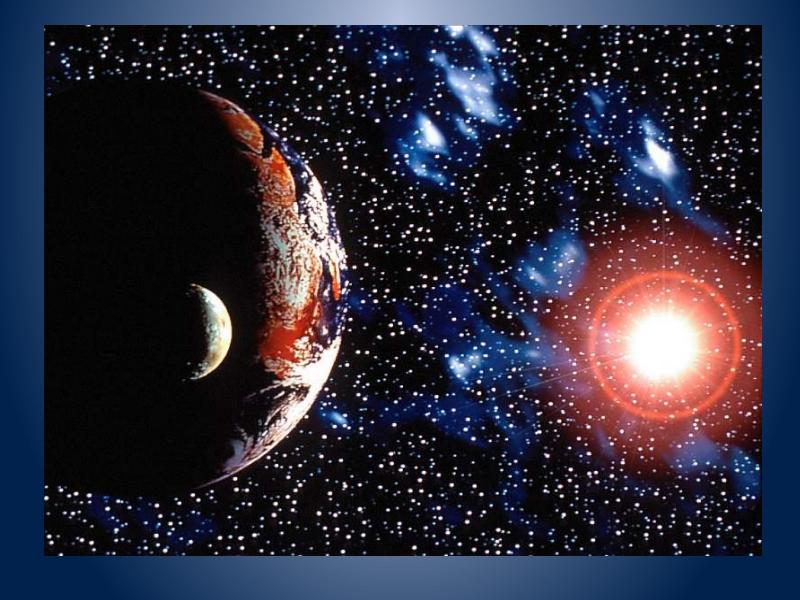 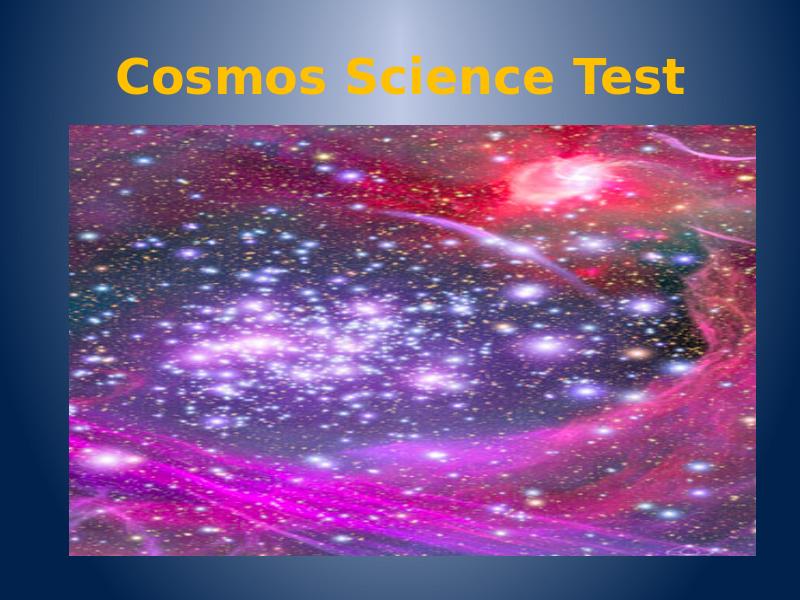 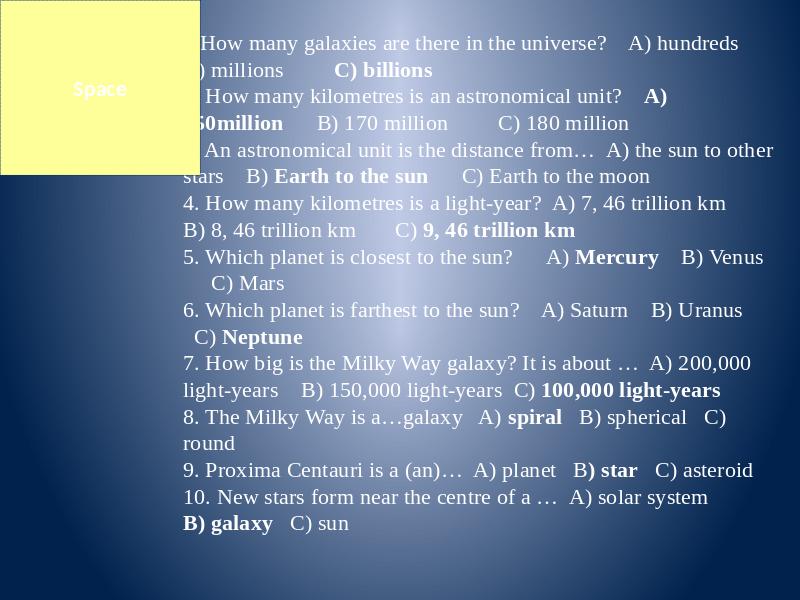 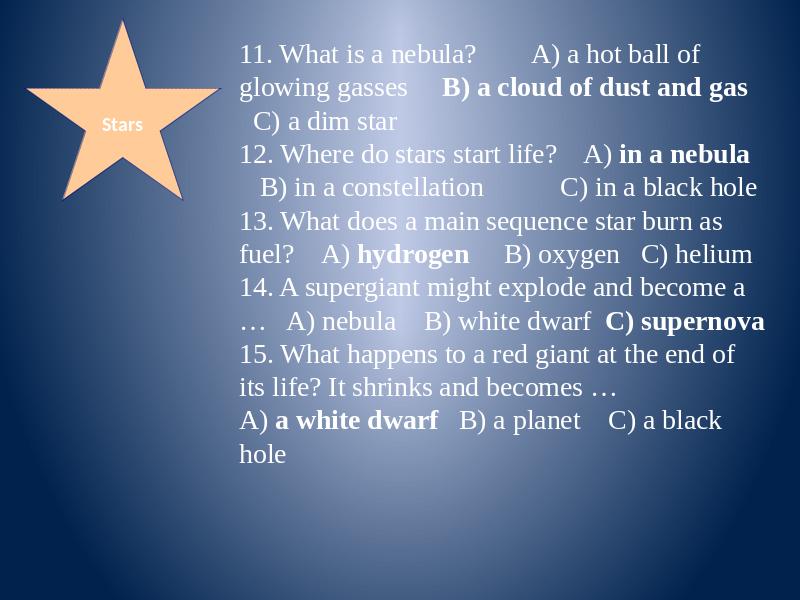 Stars 11. What is a nebula? A) a hot ball of glowing gasses B) a cloud of dust and gas C) a dim star 12. Where do stars start life? A) in a nebula B) in a constellation C) in a black hole 13. What does a main sequence star burn as fuel? A) hydrogen B) oxygen C) helium 14. A supergiant might explode and become a … A) nebula B) white dwarf C) supernova 15. What happens to a red giant at the end of its life? It shrinks and becomes … A) a white dwarf B) a planet C) a black hole 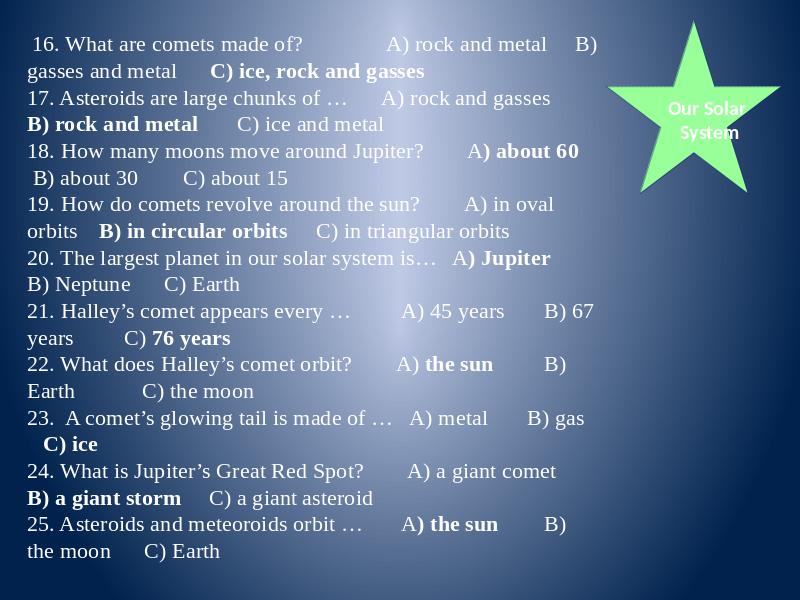 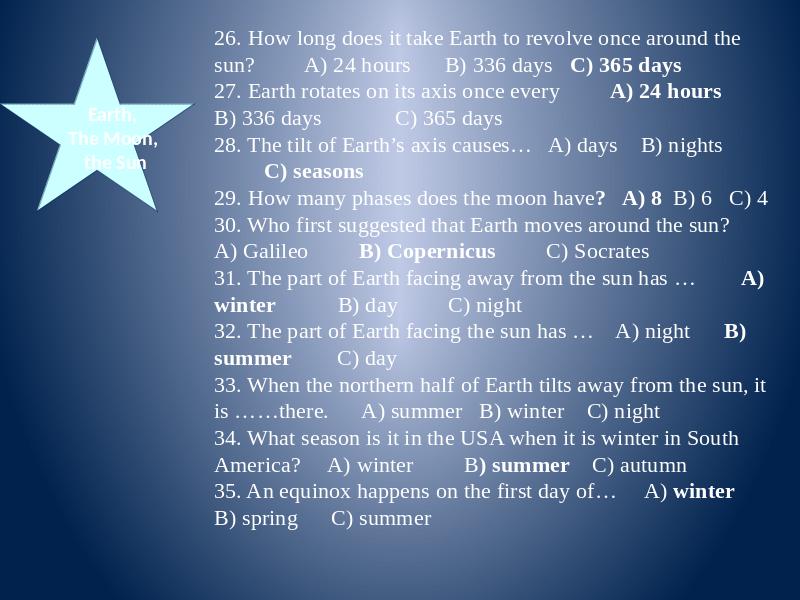 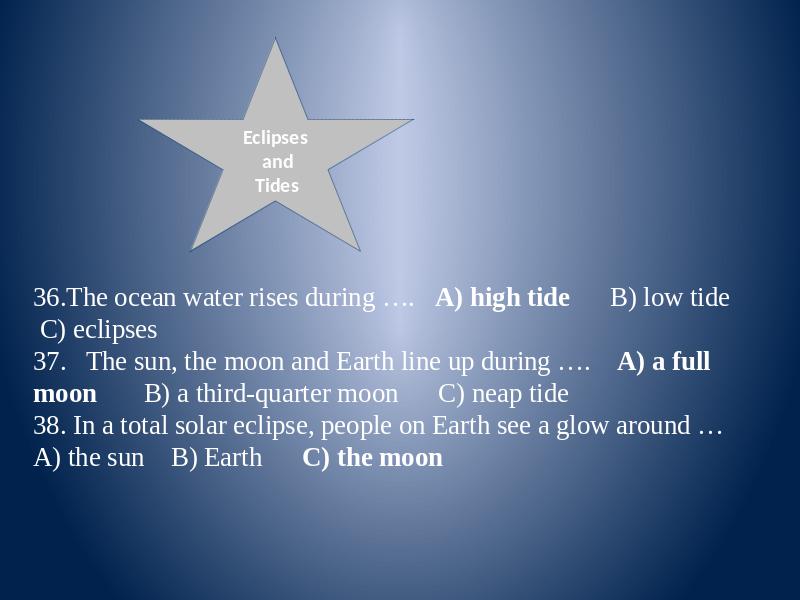 Eclipses and Tides 36.The ocean water rises during …. A) high tide B) low tide C) eclipses 37. The sun, the moon and Earth line up during …. A) a full moon B) a third-quarter moon C) neap tide 38. In a total solar eclipse, people on Earth see a glow around … A) the sun B) Earth C) the moon 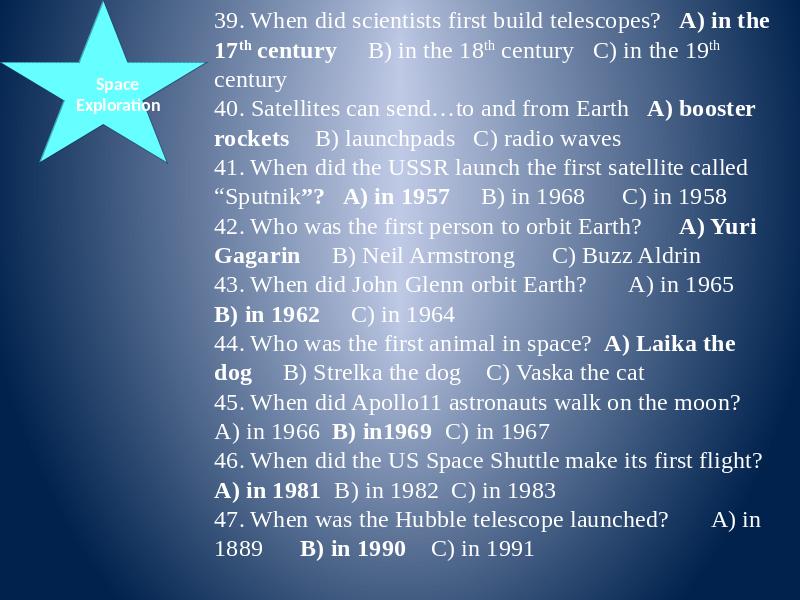