Презентация «Australia. What a different world!» 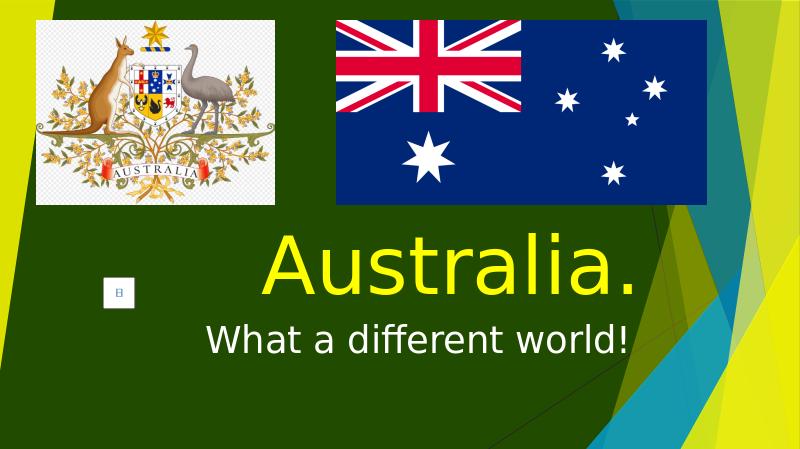 Australia. What a different world! 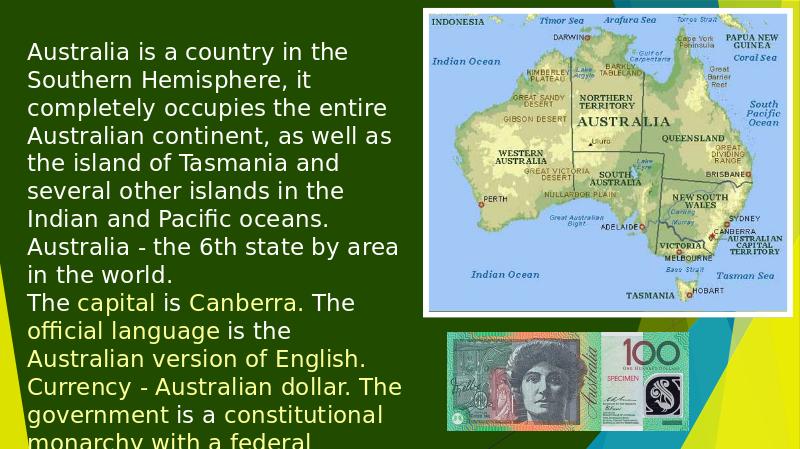 Australia is a country in the Southern Hemisphere, it completely occupies the entire Australian continent, as well as the island of Tasmania and several other islands in the Indian and Pacific oceans. Australia - the 6th state by area in the world. The capital is Canberra. The official language is the Australian version of English. Currency - Australian dollar. The government is a constitutional monarchy with a federal structure. 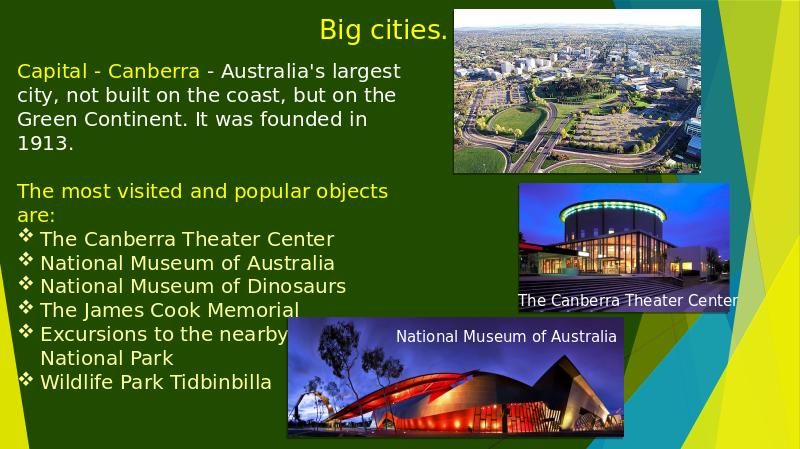 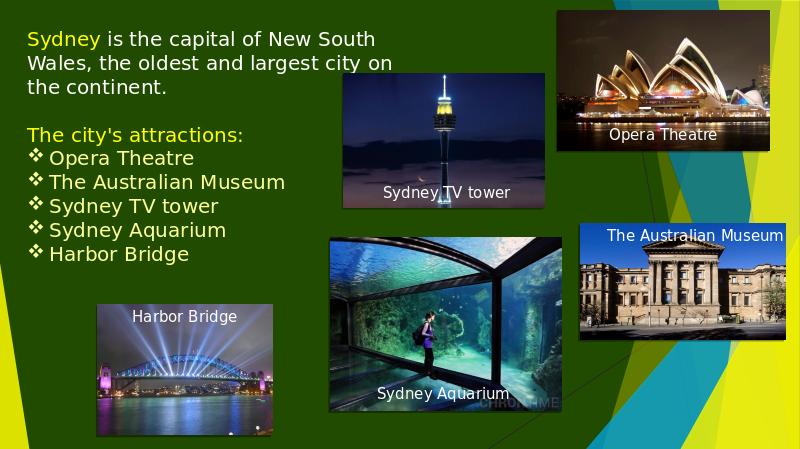 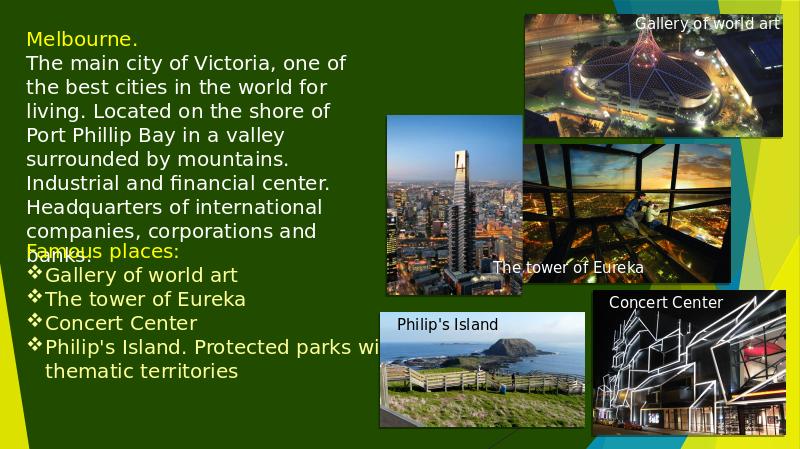 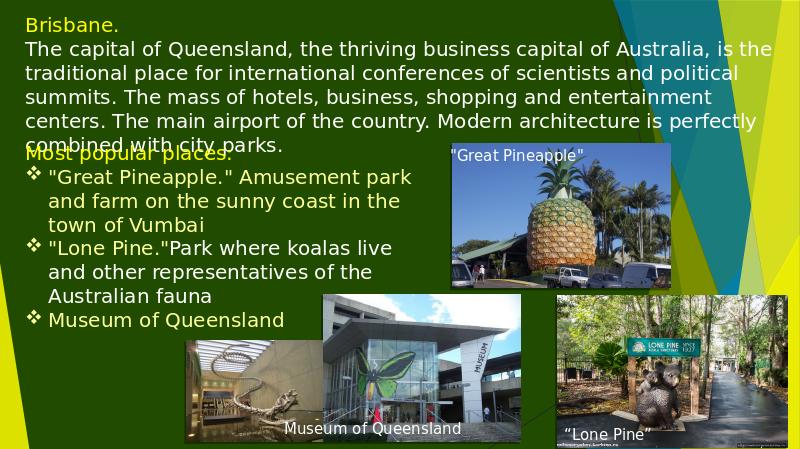 Brisbane. The capital of Queensland, the thriving business capital of Australia, is the traditional place for international conferences of scientists and political summits. The mass of hotels, business, shopping and entertainment centers. The main airport of the country. Modern architecture is perfectly combined with city parks. Most popular places: "Great Pineapple." Amusement park and farm on the sunny coast in the town of Vumbai "Lone Pine."Park where koalas live and other representatives of the Australian fauna Museum of Queensland "Great Pineapple" “Lone Pine” Museum of Queensland 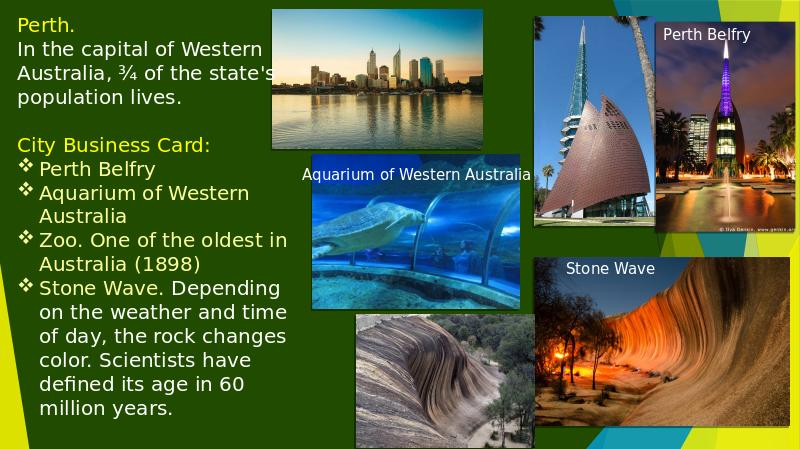 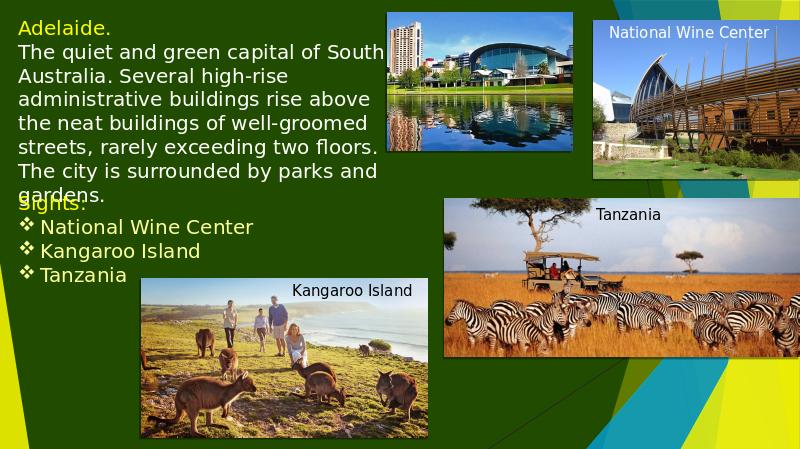 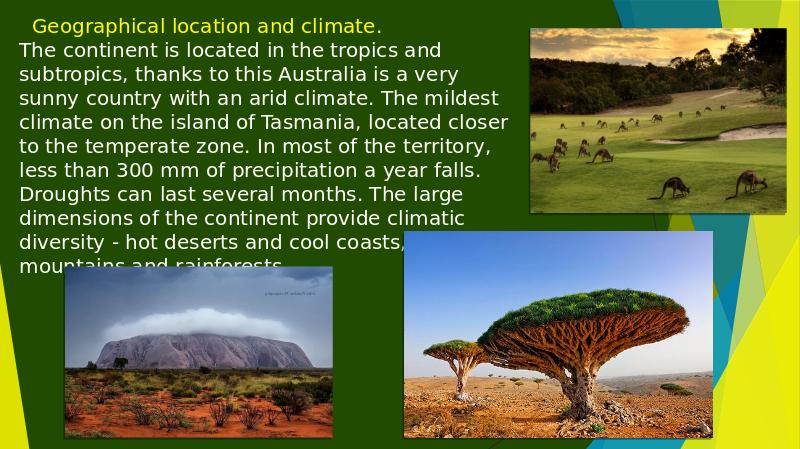 Geographical location and climate. The continent is located in the tropics and subtropics, thanks to this Australia is a very sunny country with an arid climate. The mildest climate on the island of Tasmania, located closer to the temperate zone. In most of the territory, less than 300 mm of precipitation a year falls. Droughts can last several months. The large dimensions of the continent provide climatic diversity - hot deserts and cool coasts, snowy mountains and rainforests. 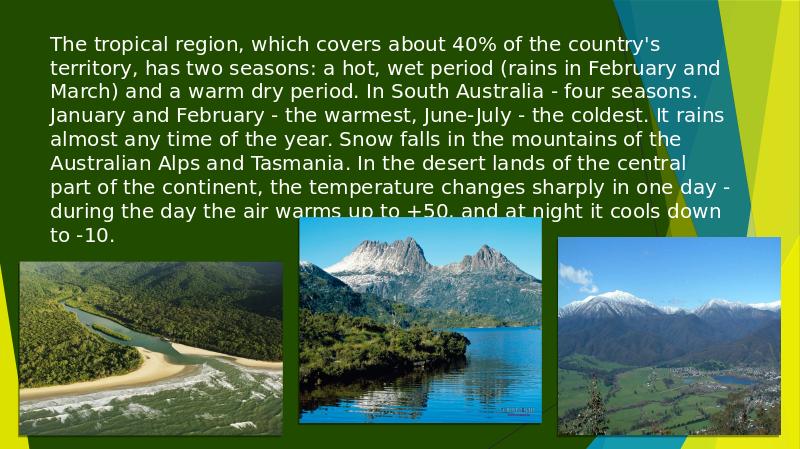 The tropical region, which covers about 40% of the country's territory, has two seasons: a hot, wet period (rains in February and March) and a warm dry period. In South Australia - four seasons. January and February - the warmest, June-July - the coldest. It rains almost any time of the year. Snow falls in the mountains of the Australian Alps and Tasmania. In the desert lands of the central part of the continent, the temperature changes sharply in one day - during the day the air warms up to +50, and at night it cools down to -10. 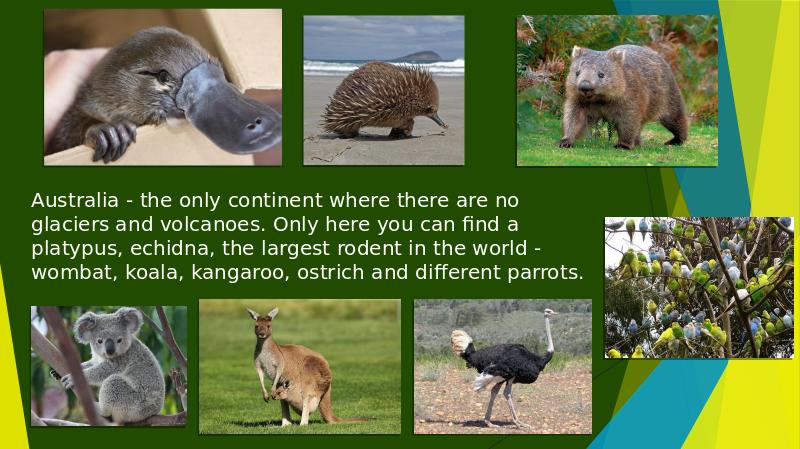 Australia - the only continent where there are no glaciers and volcanoes. Only here you can find a platypus, echidna, the largest rodent in the world - wombat, koala, kangaroo, ostrich and different parrots. 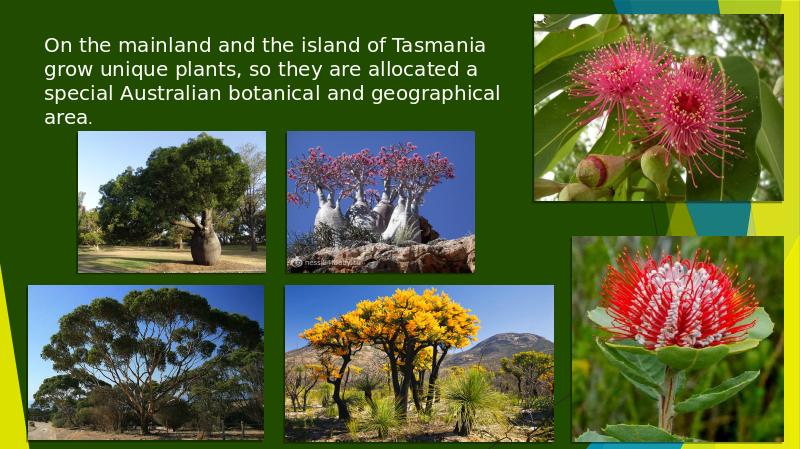 On the mainland and the island of Tasmania grow unique plants, so they are allocated a special Australian botanical and geographical area. 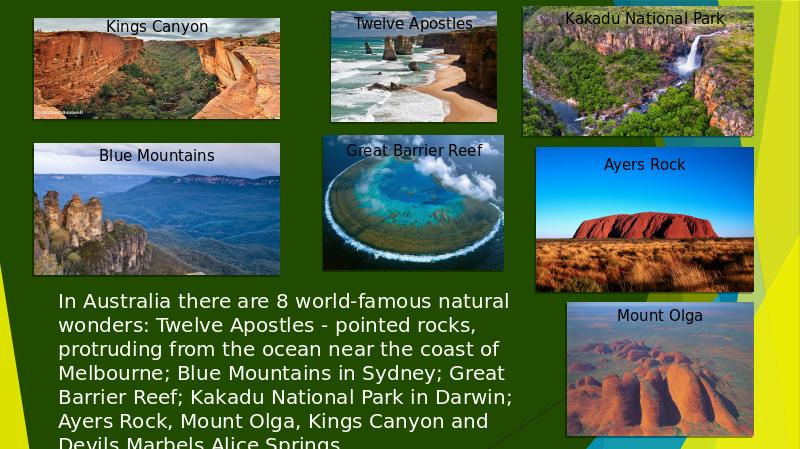 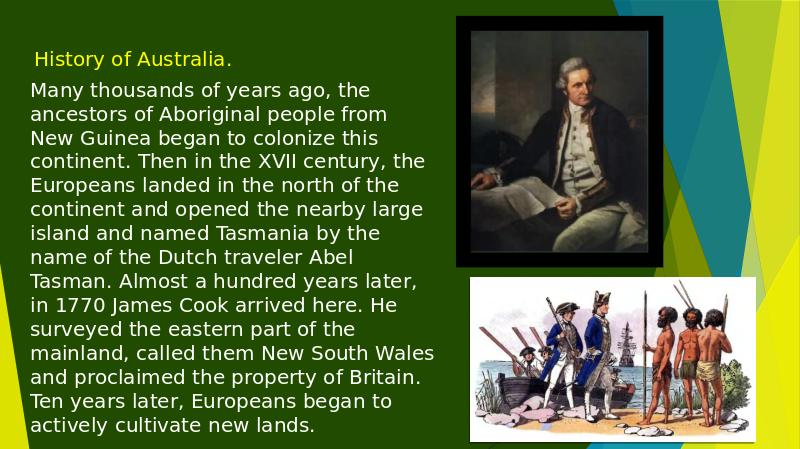 History of Australia. Many thousands of years ago, the ancestors of Aboriginal people from New Guinea began to colonize this continent. Then in the XVII century, the Europeans landed in the north of the continent and opened the nearby large island and named Tasmania by the name of the Dutch traveler Abel Tasman. Almost a hundred years later, in 1770 James Cook arrived here. He surveyed the eastern part of the mainland, called them New South Wales and proclaimed the property of Britain. Ten years later, Europeans began to actively cultivate new lands. 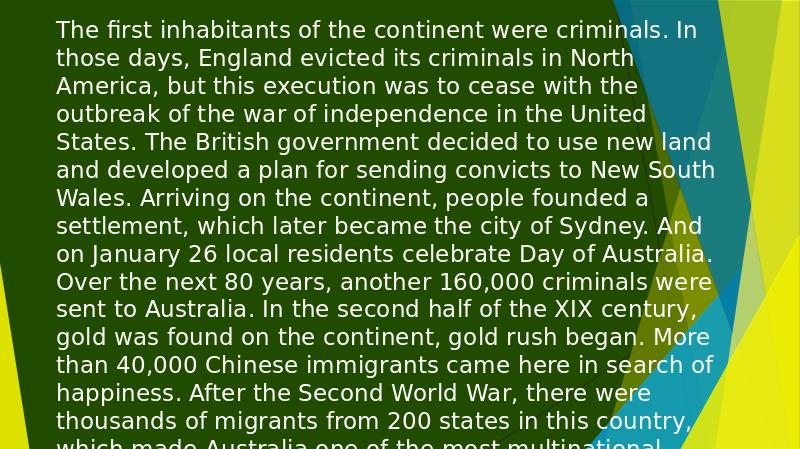 The first inhabitants of the continent were criminals. In those days, England evicted its criminals in North America, but this execution was to cease with the outbreak of the war of independence in the United States. The British government decided to use new land and developed a plan for sending convicts to New South Wales. Arriving on the continent, people founded a settlement, which later became the city of Sydney. And on January 26 local residents celebrate Day of Australia. Over the next 80 years, another 160,000 criminals were sent to Australia. In the second half of the XIX century, gold was found on the continent, gold rush began. More than 40,000 Chinese immigrants came here in search of happiness. After the Second World War, there were thousands of migrants from 200 states in this country, which made Australia one of the most multinational countries in the world. 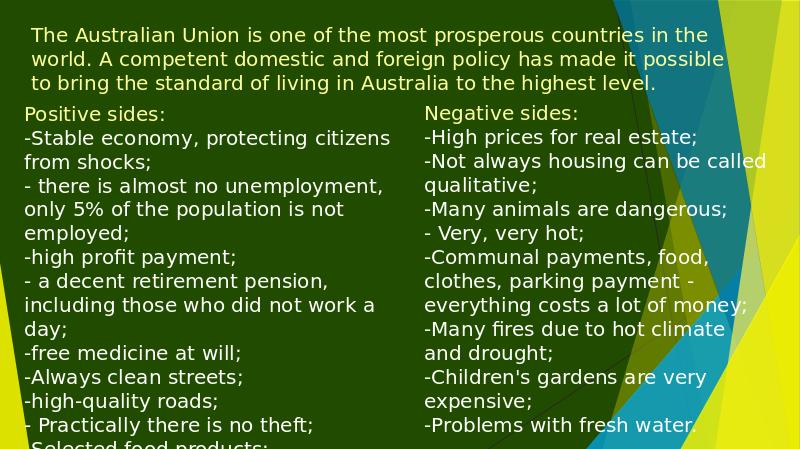 The Australian Union is one of the most prosperous countries in the world. A competent domestic and foreign policy has made it possible to bring the standard of living in Australia to the highest level. Positive sides: -Stable economy, protecting citizens from shocks; - there is almost no unemployment, only 5% of the population is not employed; -high profit payment; - a decent retirement pension, including those who did not work a day; -free medicine at will; -Always clean streets; -high-quality roads; - Practically there is no theft; -Selected food products; -continuous, warm climate. Negative sides: -High prices for real estate; -Not always housing can be called qualitative; -Many animals are dangerous; - Very, very hot; -Communal payments, food, clothes, parking payment - everything costs a lot of money; -Many fires due to hot climate and drought; -Children's gardens are very expensive; -Problems with fresh water. 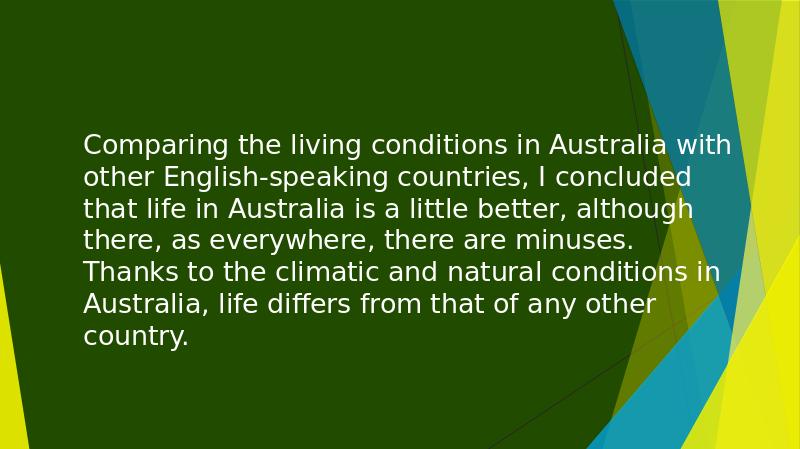