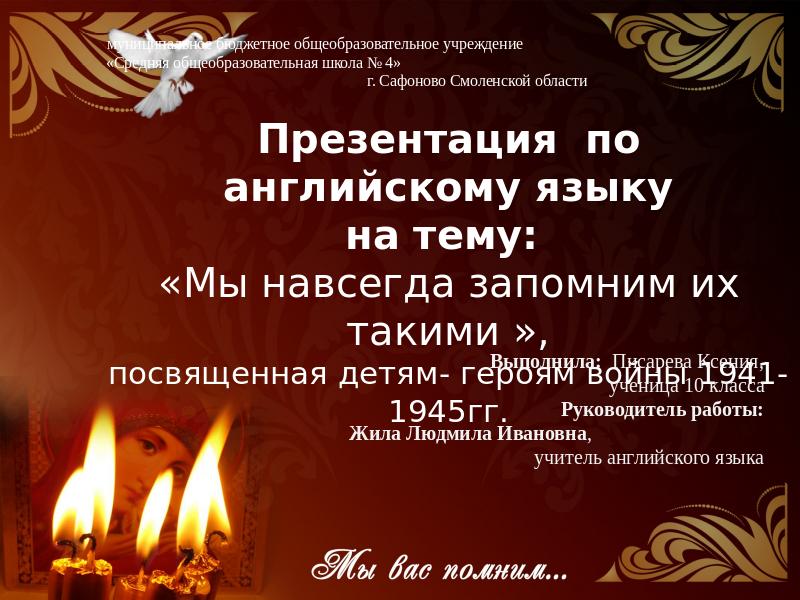 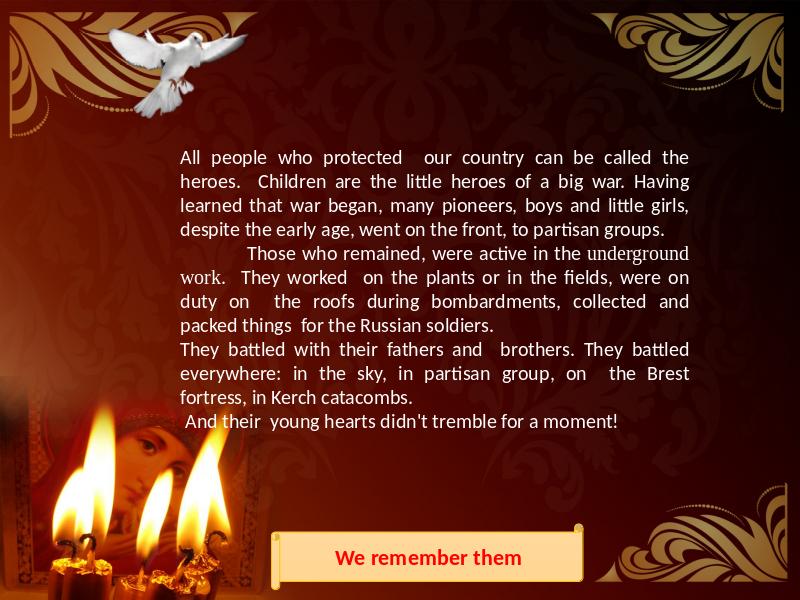 All people who protected our country can be called the heroes. Children are the little heroes of a big war. Having learned that war began, many pioneers, boys and little girls, despite the early age, went on the front, to partisan groups. Those who remained, were active in the underground work. They worked on the plants or in the fields, were on duty on the roofs during bombardments, collected and packed things for the Russian soldiers. They battled with their fathers and brothers. They battled everywhere: in the sky, in partisan group, on the Brest fortress, in Kerch catacombs. And their young hearts didn't tremble for a moment! We remember them 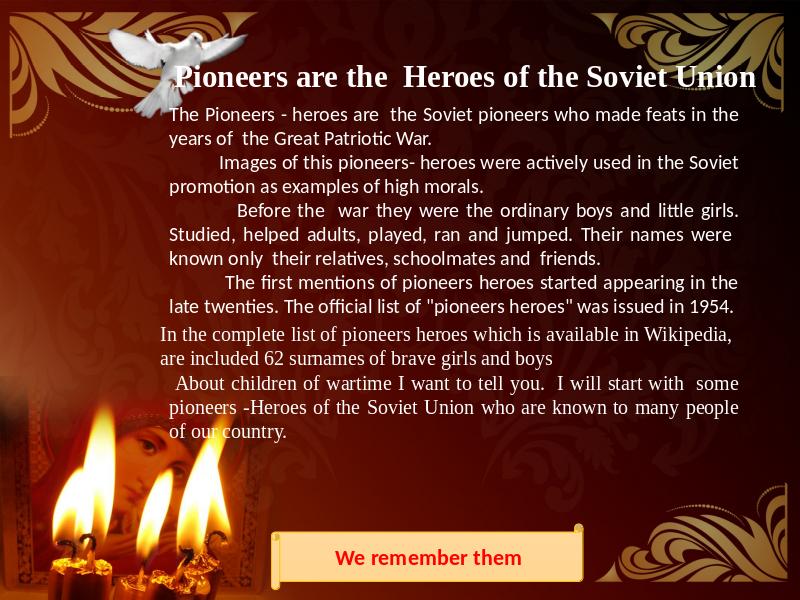 Pioneers are the Heroes of the Soviet Union The Pioneers - heroes are the Soviet pioneers who made feats in the years of the Great Patriotic War. Images of this pioneers- heroes were actively used in the Soviet promotion as examples of high morals. Before the war they were the ordinary boys and little girls. Studied, helped adults, played, ran and jumped. Their names were known only their relatives, schoolmates and friends. The first mentions of pioneers heroes started appearing in the late twenties. The official list of "pioneers heroes" was issued in 1954. In the complete list of pioneers heroes which is available in Wikipedia, are included 62 surnames of brave girls and boys About children of wartime I want to tell you. I will start with some pioneers -Heroes of the Soviet Union who are known to many people of our country. We remember them 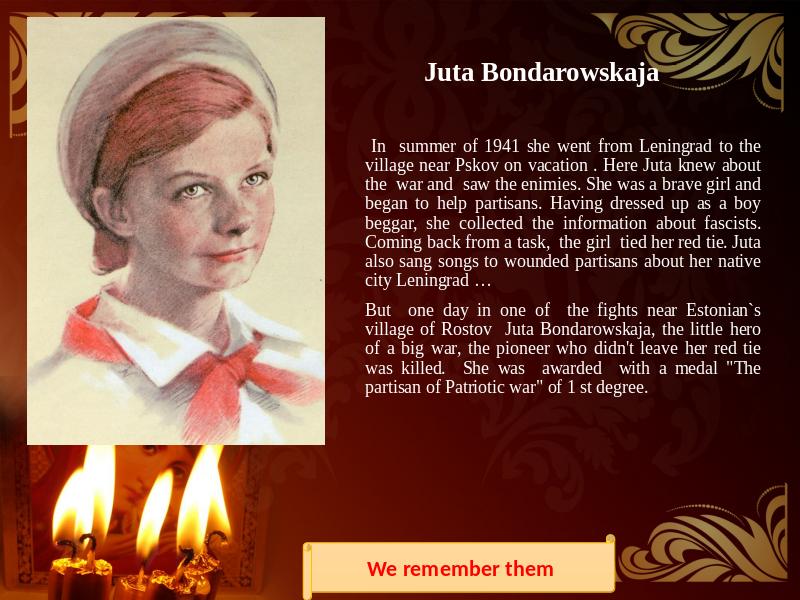 Juta Bondarowskaja In summer of 1941 she went from Leningrad to the village near Pskov on vacation . Here Juta knew about the war and saw the enimies. She was a brave girl and began to help partisans. Having dressed up as a boy beggar, she collected the information about fascists. Coming back from a task, the girl tied her red tie. Juta also sang songs to wounded partisans about her native city Leningrad … But one day in one of the fights near Estonian`s village of Rostov Juta Bondarowskaja, the little hero of a big war, the pioneer who didn't leave her red tie was killed. She was awarded with a medal "The partisan of Patriotic war" of 1 st degree. We remember them 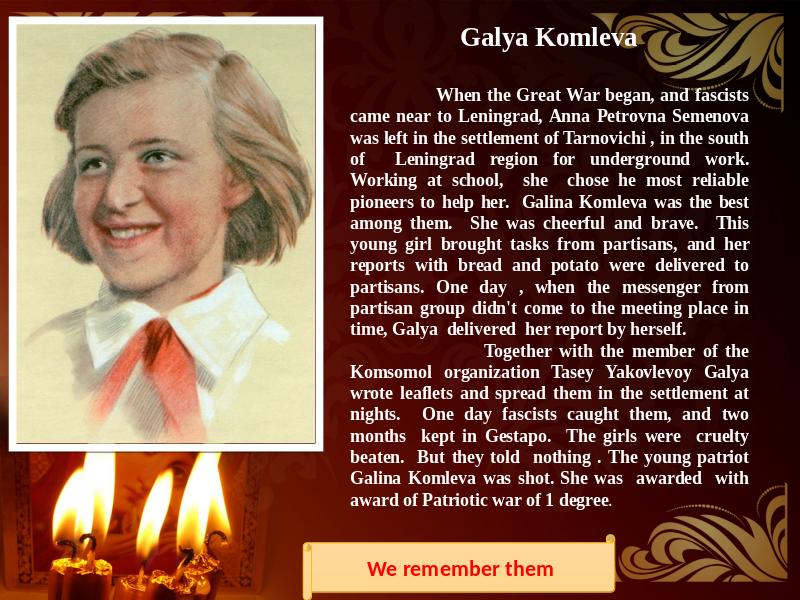 Galya Komleva When the Great War began, and fascists came near to Leningrad, Anna Petrovna Semenova was left in the settlement of Tarnovichi , in the south of Leningrad region for underground work. Working at school, she chose he most reliable pioneers to help her. Galina Komleva was the best among them. She was cheerful and brave. This young girl brought tasks from partisans, and her reports with bread and potato were delivered to partisans. One day , when the messenger from partisan group didn't come to the meeting place in time, Galya delivered her report by herself. Together with the member of the Komsomol organization Tasey Yakovlevoy Galya wrote leaflets and spread them in the settlement at nights. One day fascists caught them, and two months kept in Gestapo. The girls were cruelty beaten. But they told nothing . The young patriot Galina Komleva was shot. She was awarded with award of Patriotic war of 1 degree. We remember them 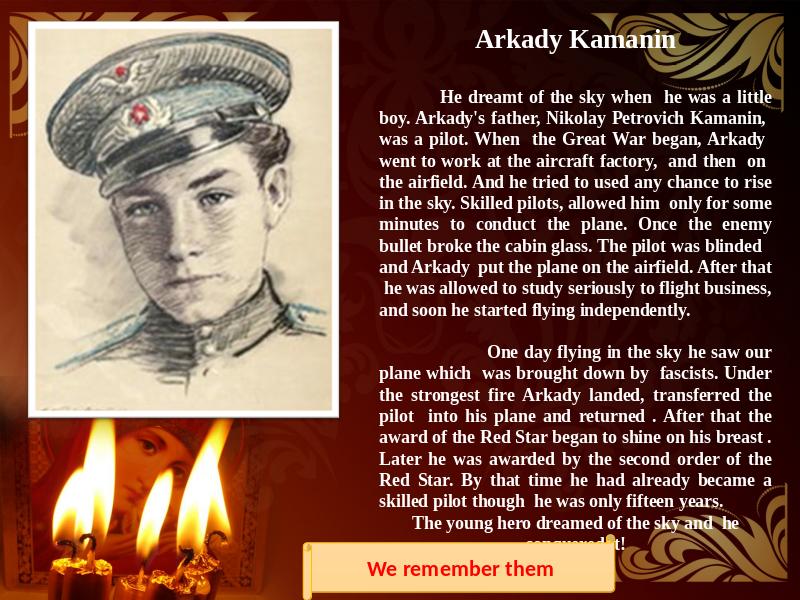 Arkady Kamanin He dreamt of the sky when he was a little boy. Arkady's father, Nikolay Petrovich Kamanin, was a pilot. When the Great War began, Arkady went to work at the aircraft factory, and then on the airfield. And he tried to used any chance to rise in the sky. Skilled pilots, allowed him only for some minutes to conduct the plane. Once the enemy bullet broke the cabin glass. The pilot was blinded and Arkady put the plane on the airfield. After that he was allowed to study seriously to flight business, and soon he started flying independently. One day flying in the sky he saw our plane which was brought down by fascists. Under the strongest fire Arkady landed, transferred the pilot into his plane and returned . After that the award of the Red Star began to shine on his breast . Later he was awarded by the second order of the Red Star. By that time he had already became a skilled pilot though he was only fifteen years. The young hero dreamed of the sky and he conquered it! We remember them 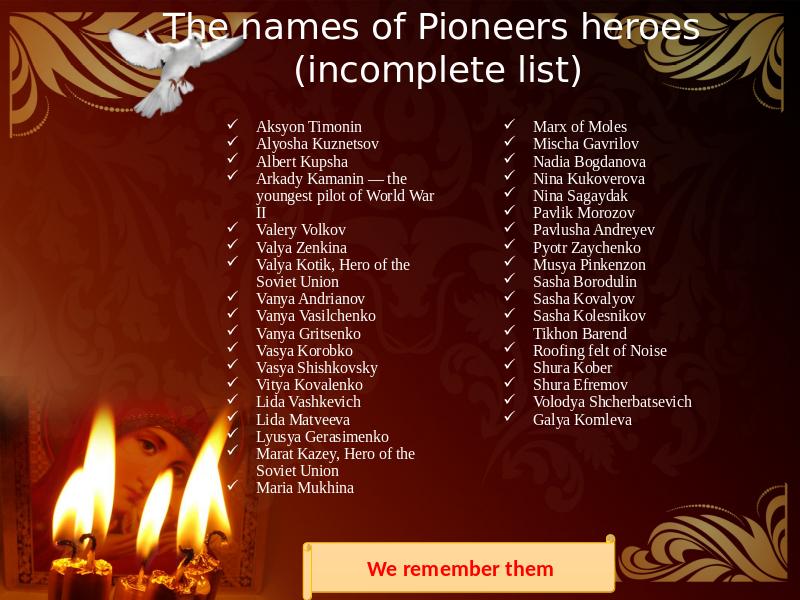 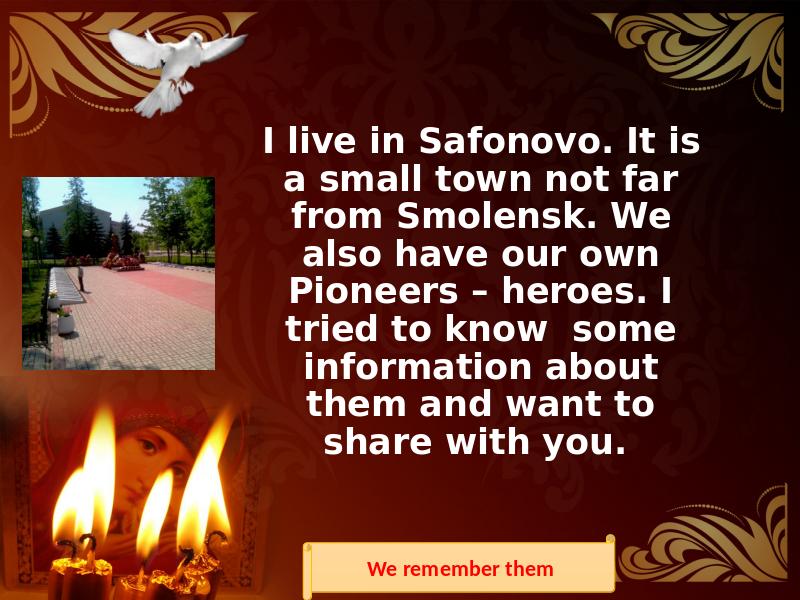 I live in Safonovo. It is a small town not far from Smolensk. We also have our own Pioneers – heroes. I tried to know some information about them and want to share with you. We remember them 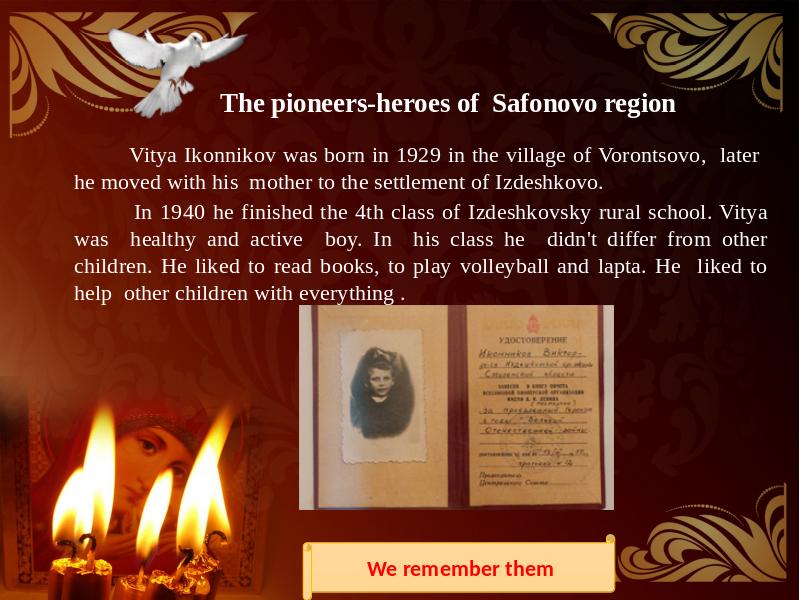 The pioneers-heroes of Safonovo region Vitya Ikonnikov was born in 1929 in the village of Vorontsovo, later he moved with his mother to the settlement of Izdeshkovo. In 1940 he finished the 4th class of Izdeshkovsky rural school. Vitya was healthy and active boy. In his class he didn't differ from other children. He liked to read books, to play volleyball and lapta. He liked to help other children with everything . We remember them 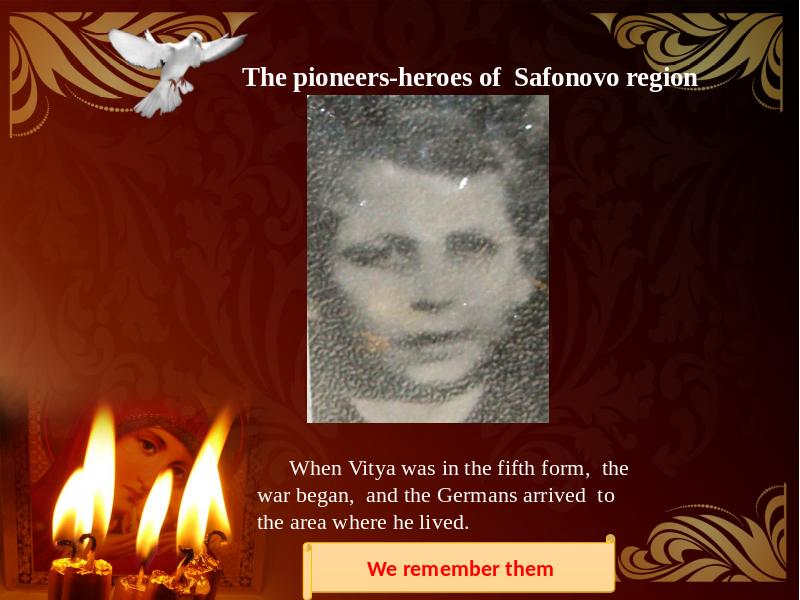 The pioneers-heroes of Safonovo region When Vitya was in the fifth form, the war began, and the Germans arrived to the area where he lived. We remember them 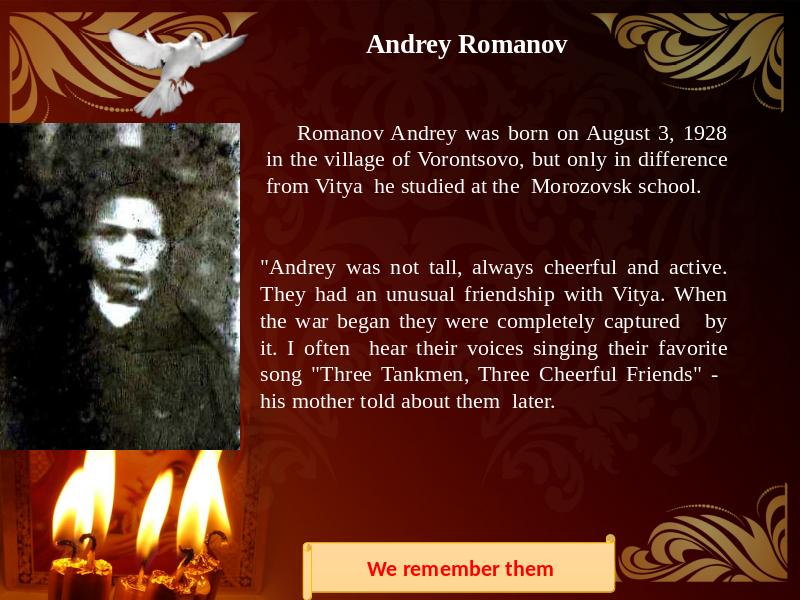 Andrey Romanov Romanov Andrey was born on August 3, 1928 in the village of Vorontsovo, but only in difference from Vitya he studied at the Morozovsk school. "Andrey was not tall, always cheerful and active. They had an unusual friendship with Vitya. When the war began they were completely captured by it. I often hear their voices singing their favorite song "Three Tankmen, Three Cheerful Friends" - his mother told about them later. We remember them 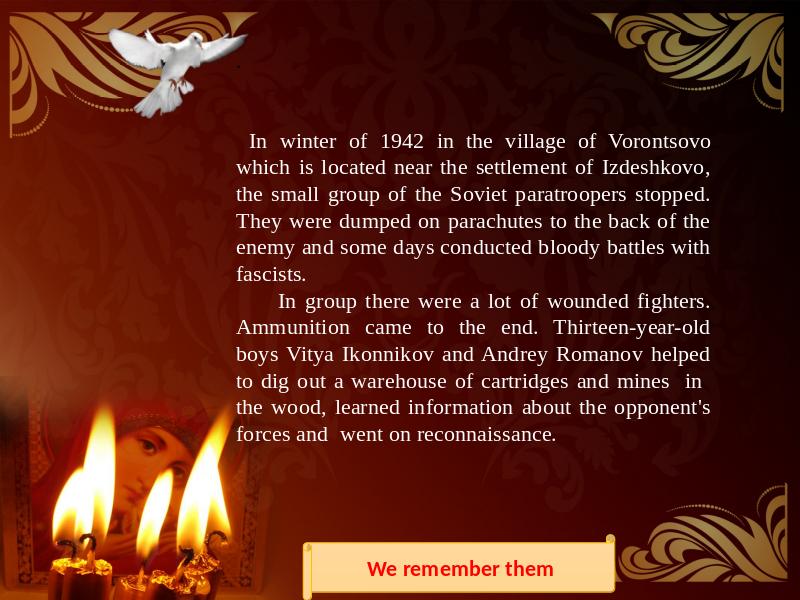 . In winter of 1942 in the village of Vorontsovo which is located near the settlement of Izdeshkovo, the small group of the Soviet paratroopers stopped. They were dumped on parachutes to the back of the enemy and some days conducted bloody battles with fascists. In group there were a lot of wounded fighters. Ammunition came to the end. Thirteen-year-old boys Vitya Ikonnikov and Andrey Romanov helped to dig out a warehouse of cartridges and mines in the wood, learned information about the opponent's forces and went on reconnaissance. We remember them 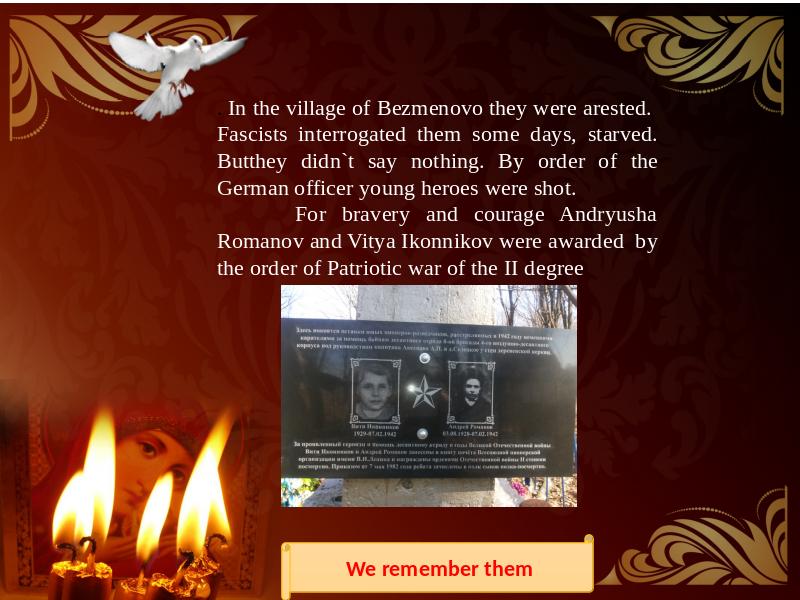 . In the village of Bezmenovo they were arested. Fascists interrogated them some days, starved. Butthey didn`t say nothing. By order of the German officer young heroes were shot. For bravery and courage Andryusha Romanov and Vitya Ikonnikov were awarded by the order of Patriotic war of the II degree We remember them 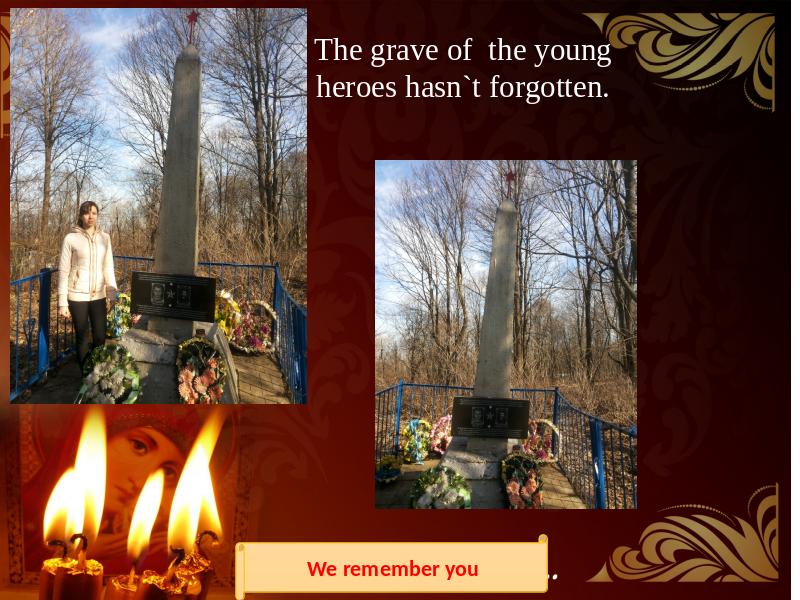 The grave of the young heroes hasn`t forgotten. We remember you 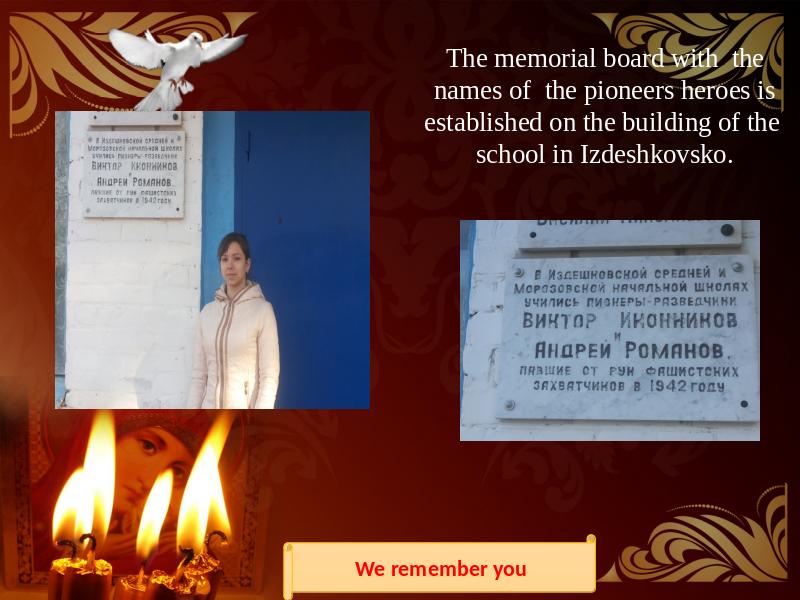 The memorial board with the names of the pioneers heroes is established on the building of the school in Izdeshkovsko. We remember you 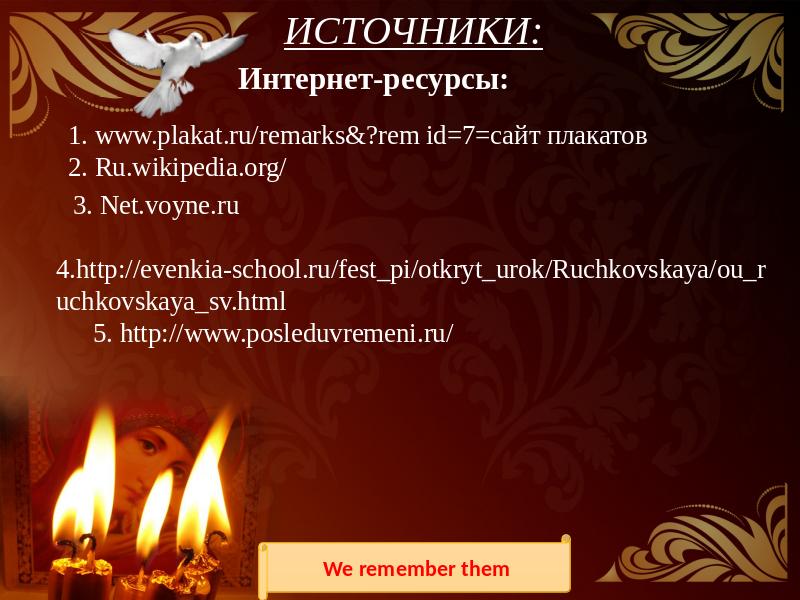 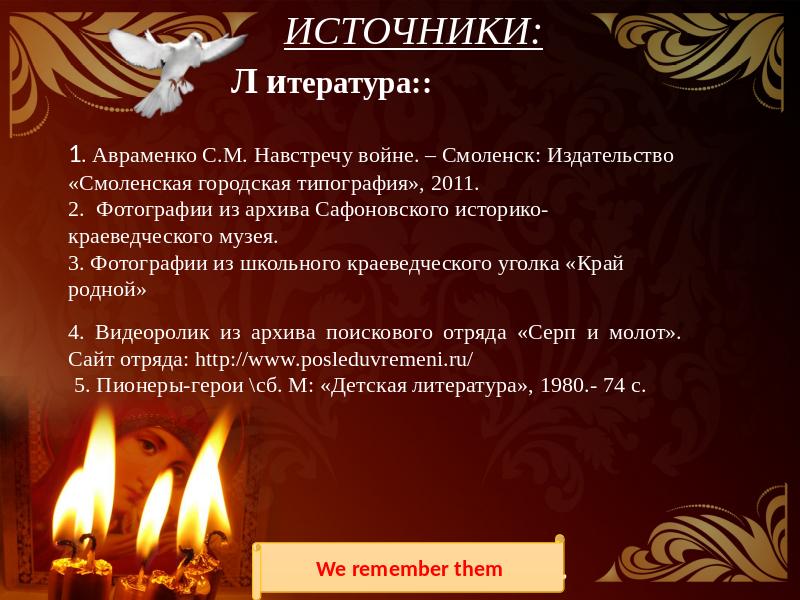