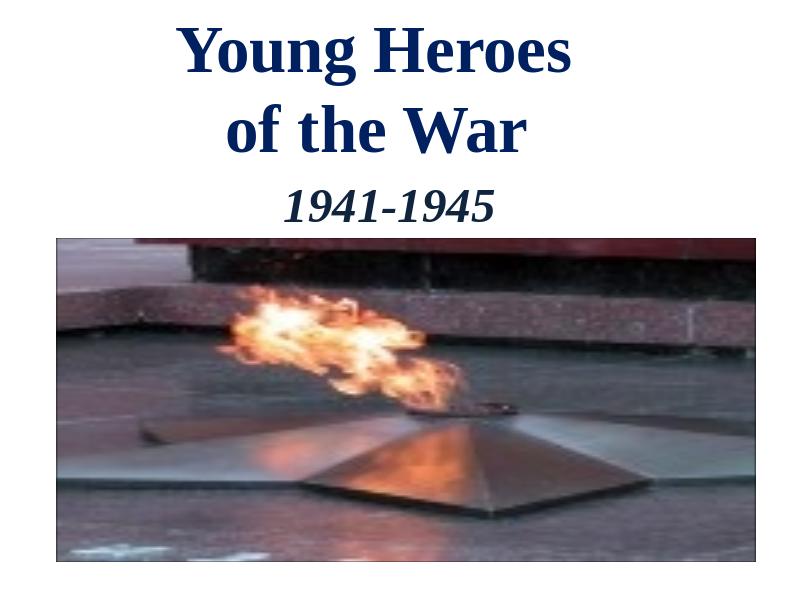 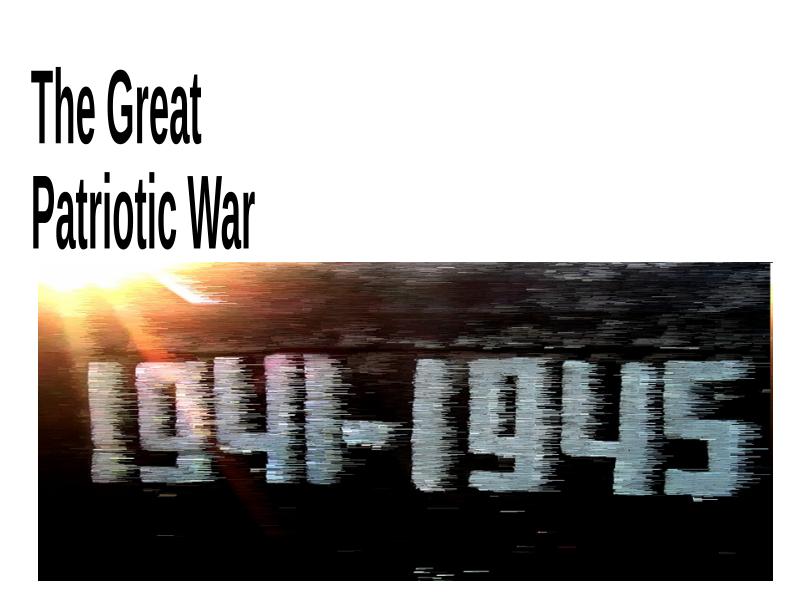 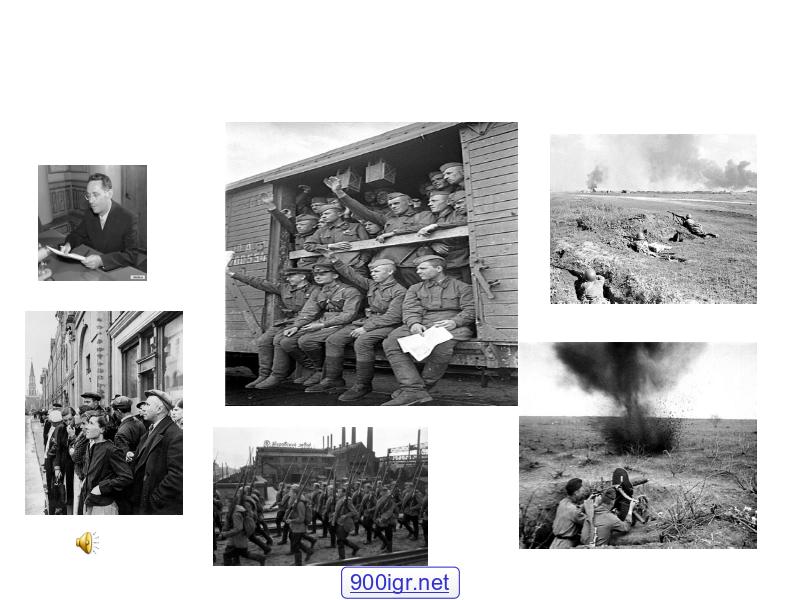 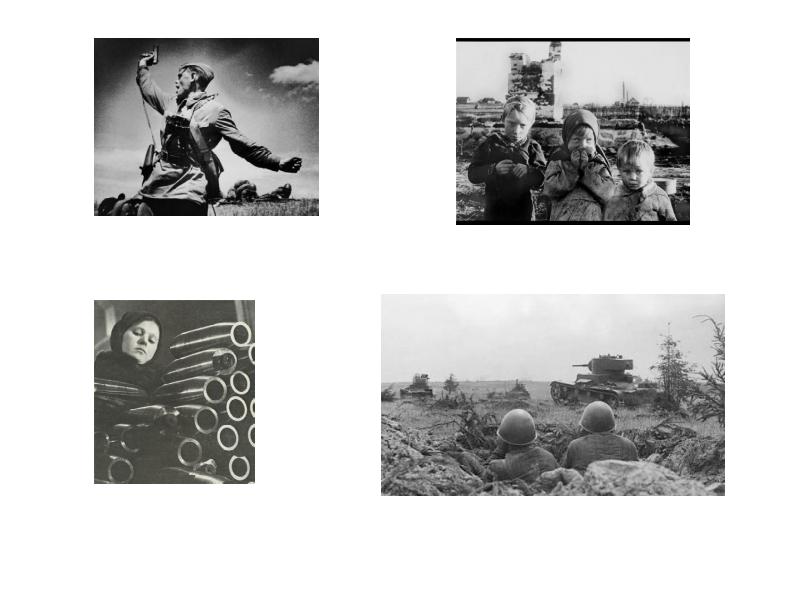 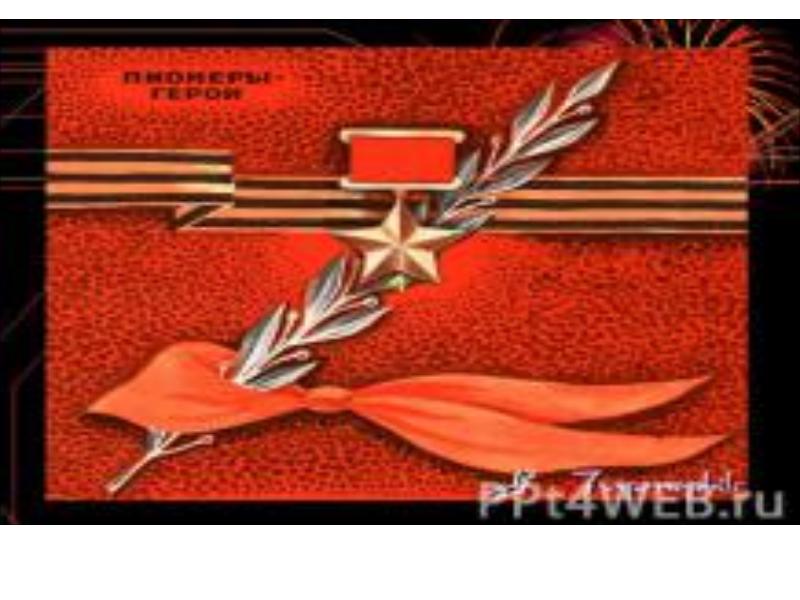 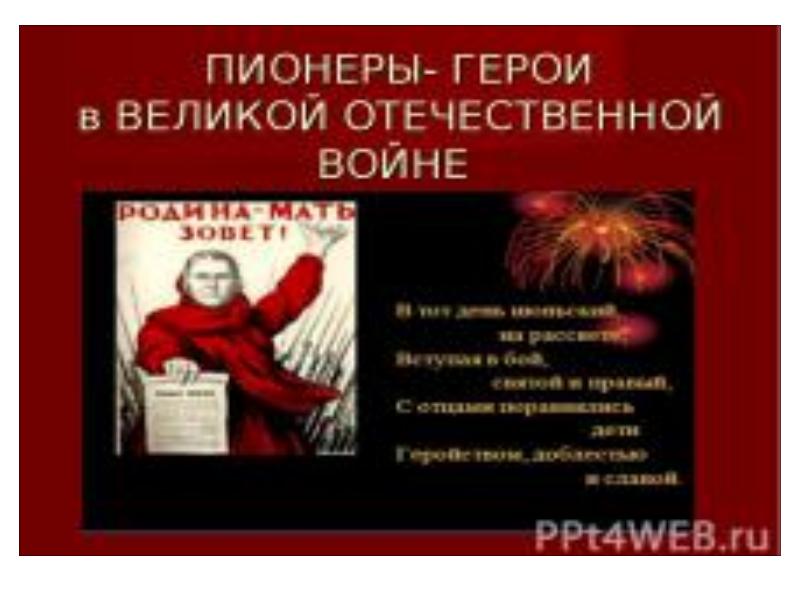 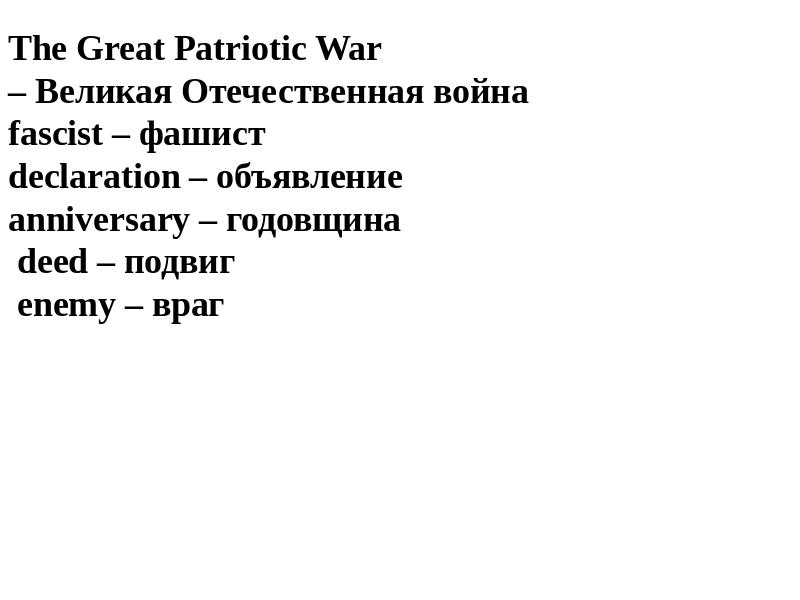 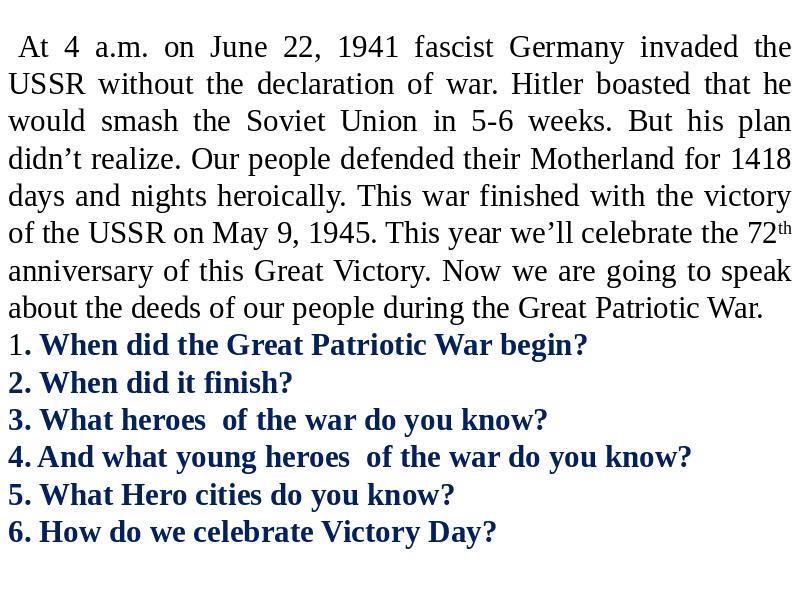 At 4 a.m. on June 22, 1941 fascist Germany invaded the USSR without the declaration of war. Hitler boasted that he would smash the Soviet Union in 5-6 weeks. But his plan didn’t realize. Our people defended their Motherland for 1418 days and nights heroically. This war finished with the victory of the USSR on May 9, 1945. This year we’ll celebrate the 72th anniversary of this Great Victory. Now we are going to speak about the deeds of our people during the Great Patriotic War. 1. When did the Great Patriotic War begin? 2. When did it finish? 3. What heroes of the war do you know? 4. And what young heroes of the war do you know? 5. What Hero cities do you know? 6. How do we celebrate Victory Day? 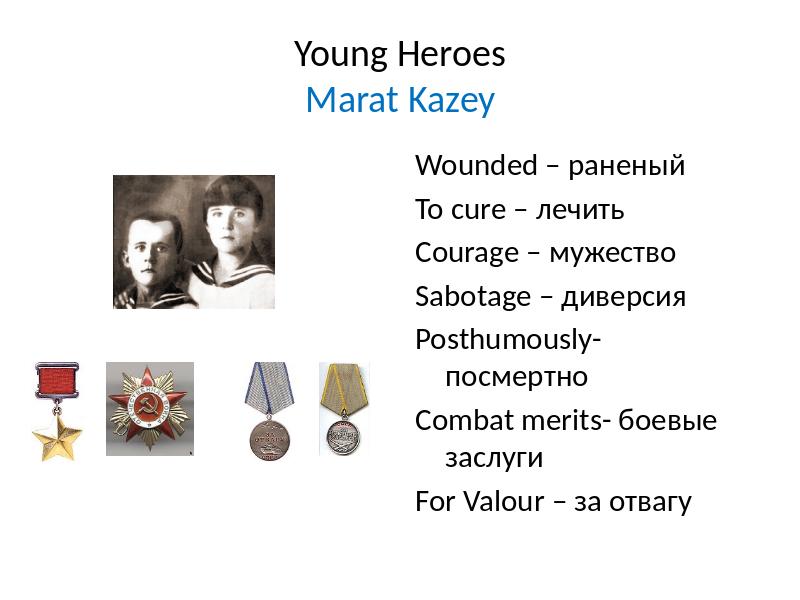 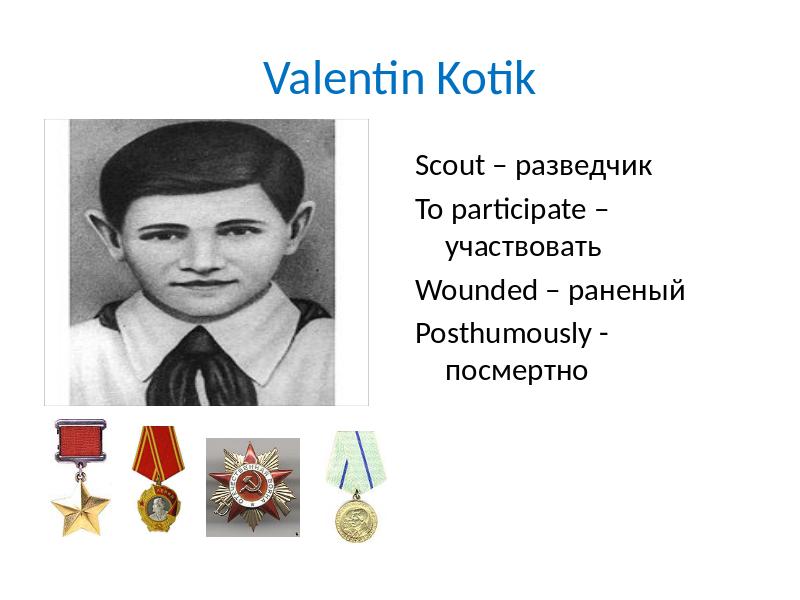 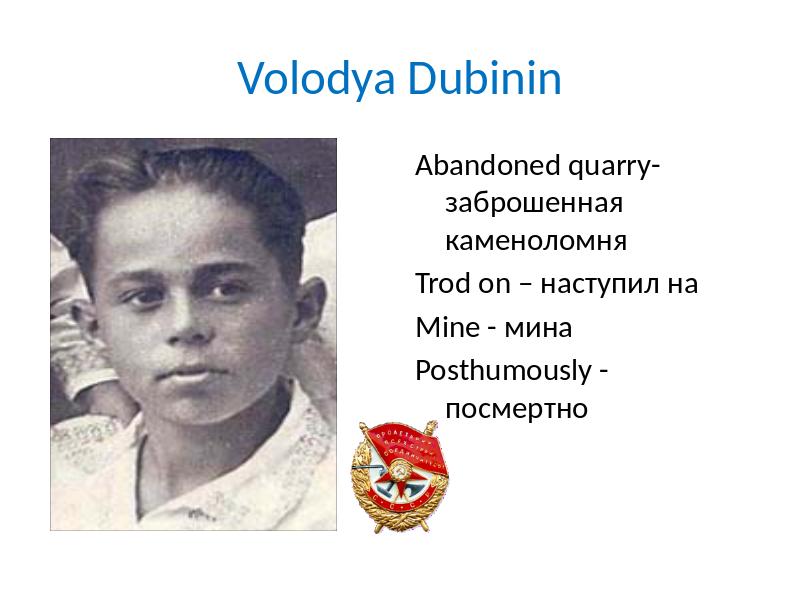 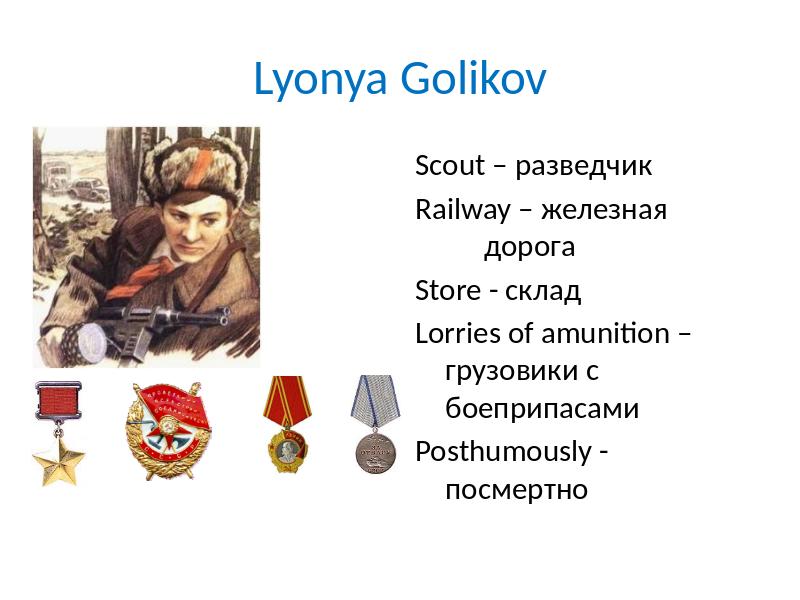 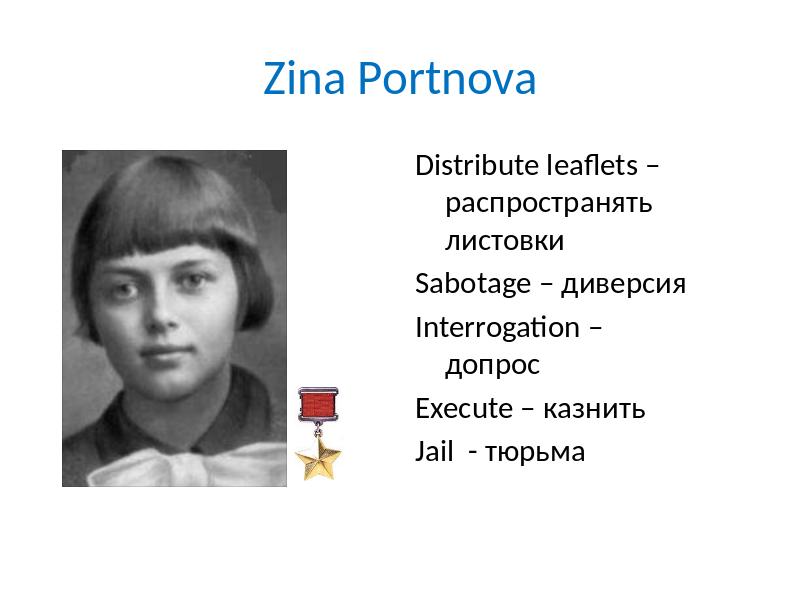 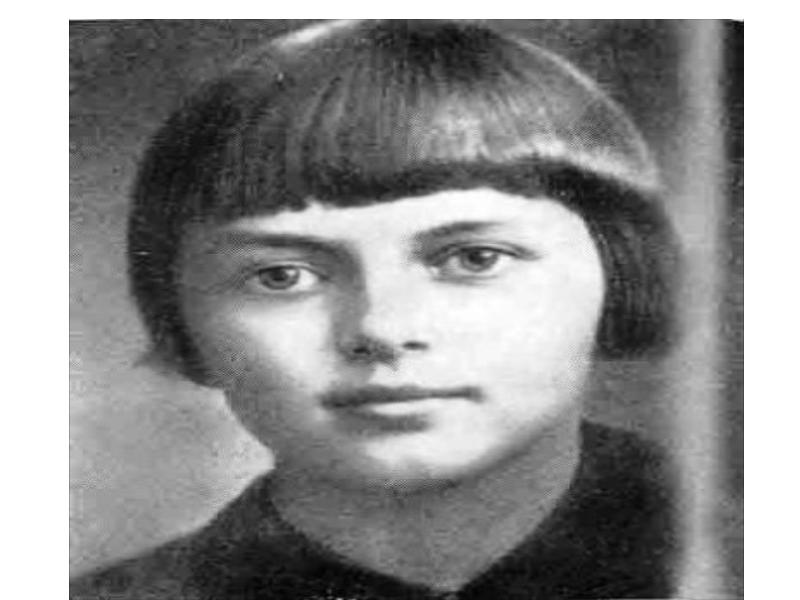 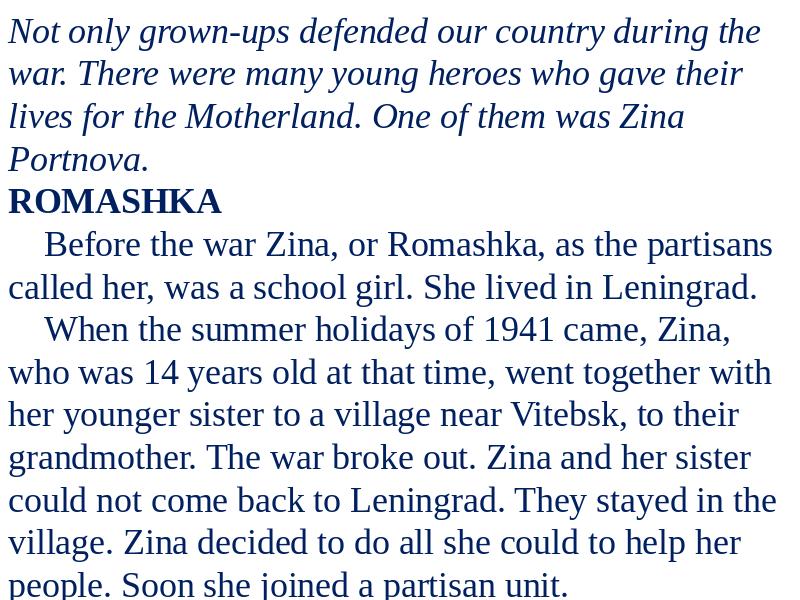 Not only grown-ups defended our country during the war. There were many young heroes who gave their lives for the Motherland. One of them was Zina Portnova. ROMASHKA Before the war Zina, or Romashka, as the partisans called her, was a school girl. She lived in Leningrad. When the summer holidays of 1941 came, Zina, who was 14 years old at that time, went together with her younger sister to a village near Vitebsk, to their grandmother. The war broke out. Zina and her sister could not come back to Leningrad. They stayed in the village. Zina decided to do all she could to help her people. Soon she joined a partisan unit. 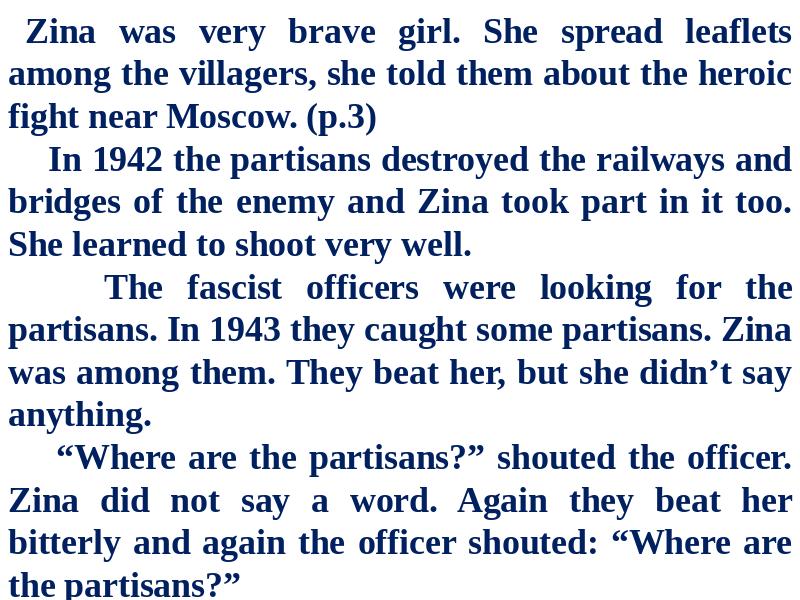 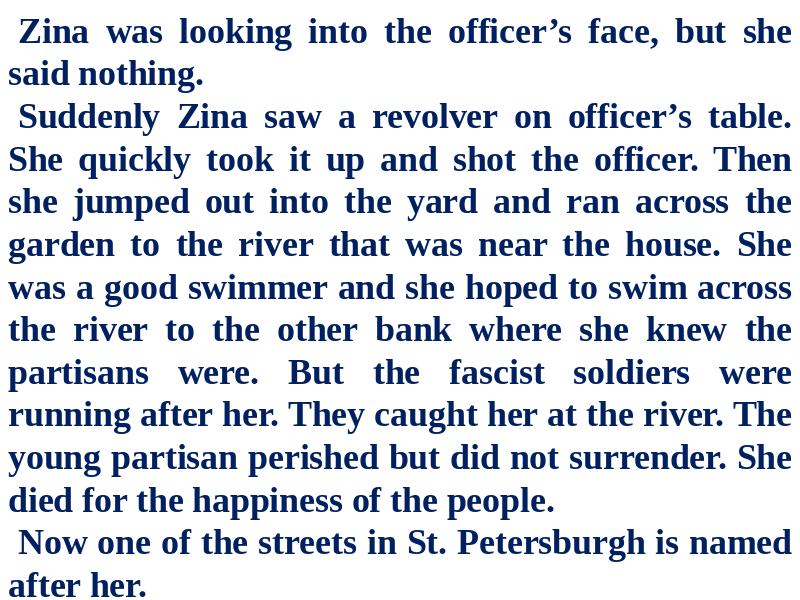 Zina was looking into the officer’s face, but she said nothing. Suddenly Zina saw a revolver on officer’s table. She quickly took it up and shot the officer. Then she jumped out into the yard and ran across the garden to the river that was near the house. She was a good swimmer and she hoped to swim across the river to the other bank where she knew the partisans were. But the fascist soldiers were running after her. They caught her at the river. The young partisan perished but did not surrender. She died for the happiness of the people. Now one of the streets in St. Petersburgh is named after her. 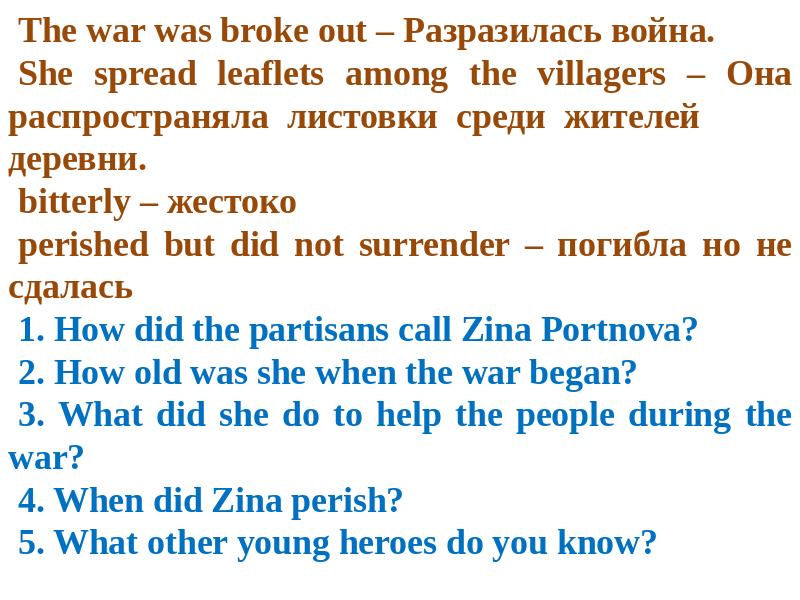 The war was broke out – Разразилась война. She spread leaflets among the villagers – Она распространяла листовки среди жителей деревни. bitterly – жестоко perished but did not surrender – погибла но не сдалась 1. How did the partisans call Zina Portnova? 2. How old was she when the war began? 3. What did she do to help the people during the war? 4. When did Zina perish? 5. What other young heroes do you know? 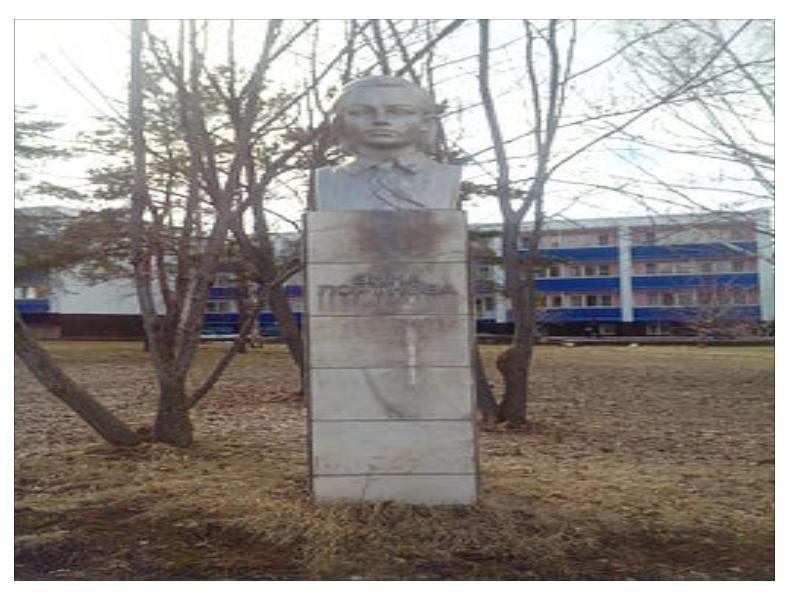 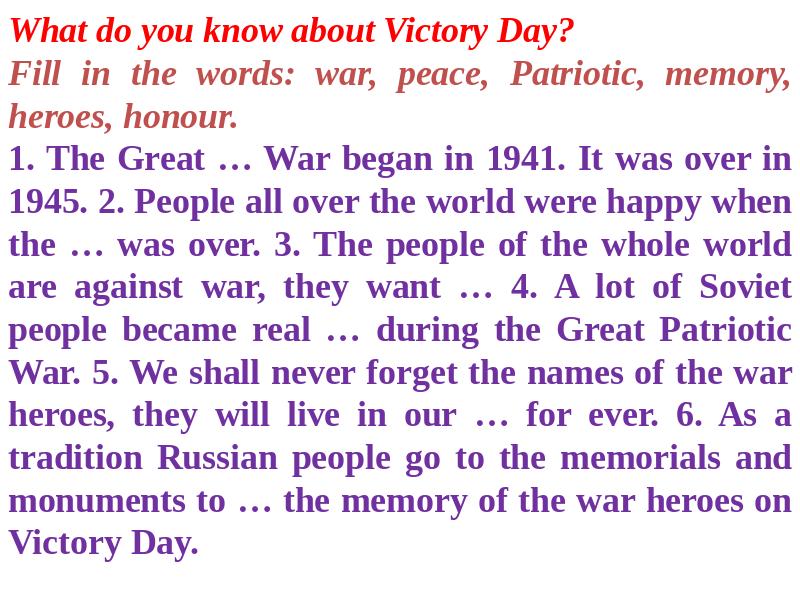 What do you know about Victory Day? Fill in the words: war, peace, Patriotic, memory, heroes, honour. 1. The Great … War began in 1941. It was over in 1945. 2. People all over the world were happy when the … was over. 3. The people of the whole world are against war, they want … 4. A lot of Soviet people became real … during the Great Patriotic War. 5. We shall never forget the names of the war heroes, they will live in our … for ever. 6. As a tradition Russian people go to the memorials and monuments to … the memory of the war heroes on Victory Day. 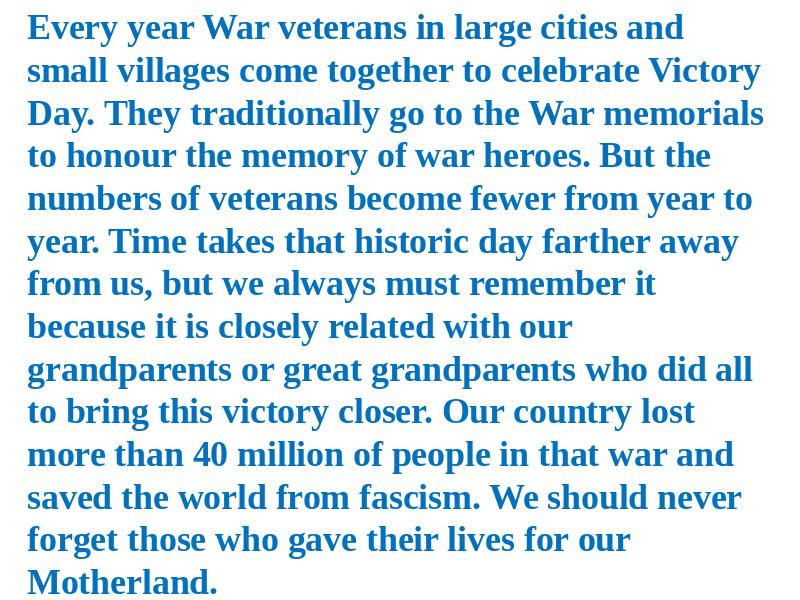 Every year War veterans in large cities and small villages come together to celebrate Victory Day. They traditionally go to the War memorials to honour the memory of war heroes. But the numbers of veterans become fewer from year to year. Time takes that historic day farther away from us, but we always must remember it because it is closely related with our grandparents or great grandparents who did all to bring this victory closer. Our country lost more than 40 million of people in that war and saved the world from fascism. We should never forget those who gave their lives for our Motherland. 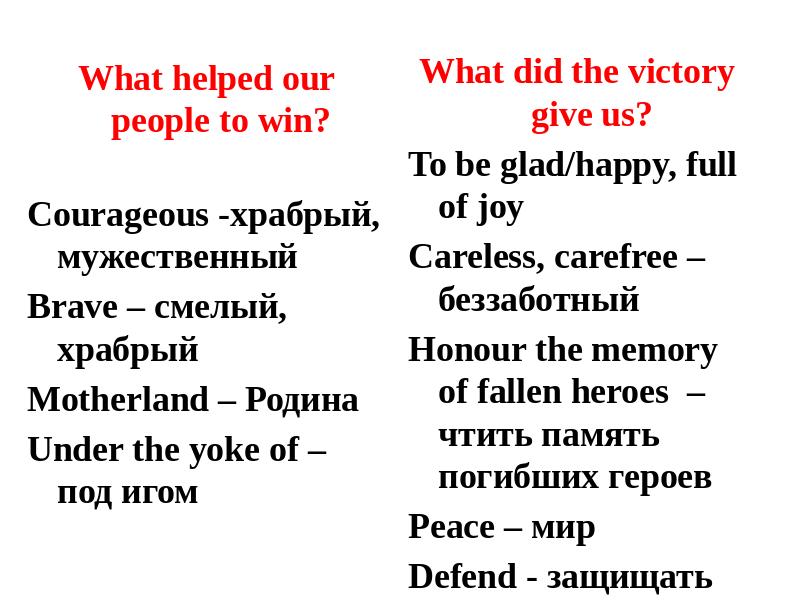 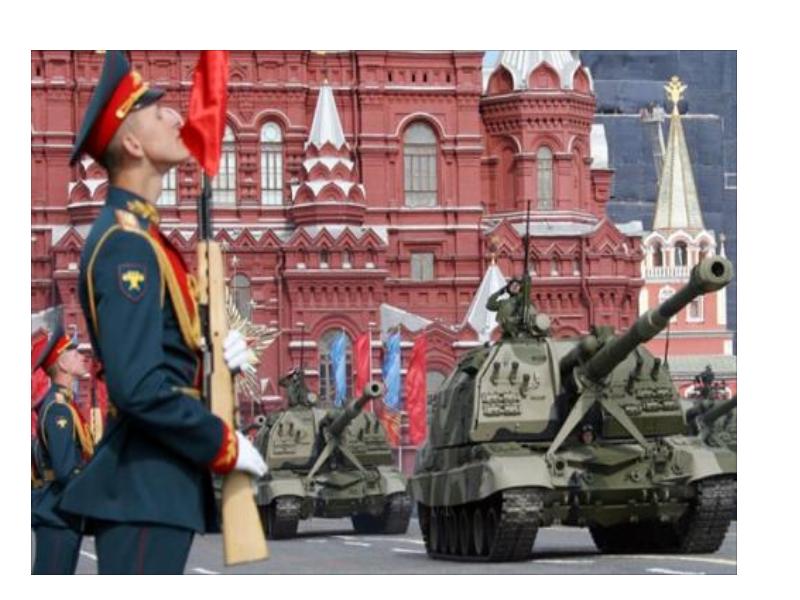 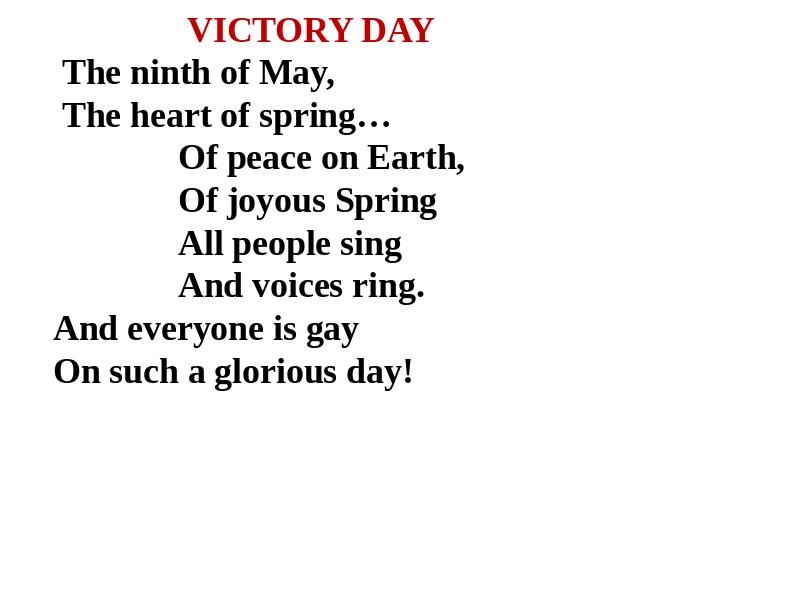 VICTORY DAY The ninth of May, The heart of spring… Of peace on Earth, Of joyous Spring All people sing And voices ring. And everyone is gay On such a glorious day!