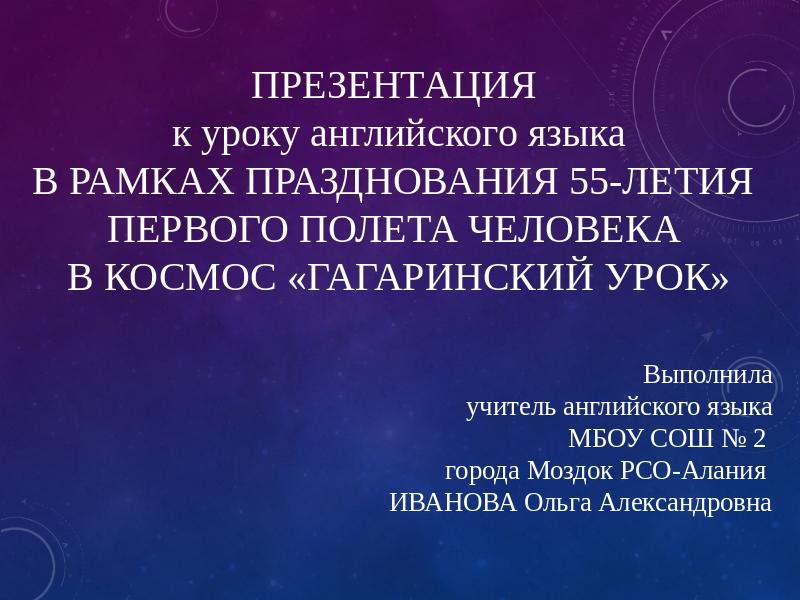 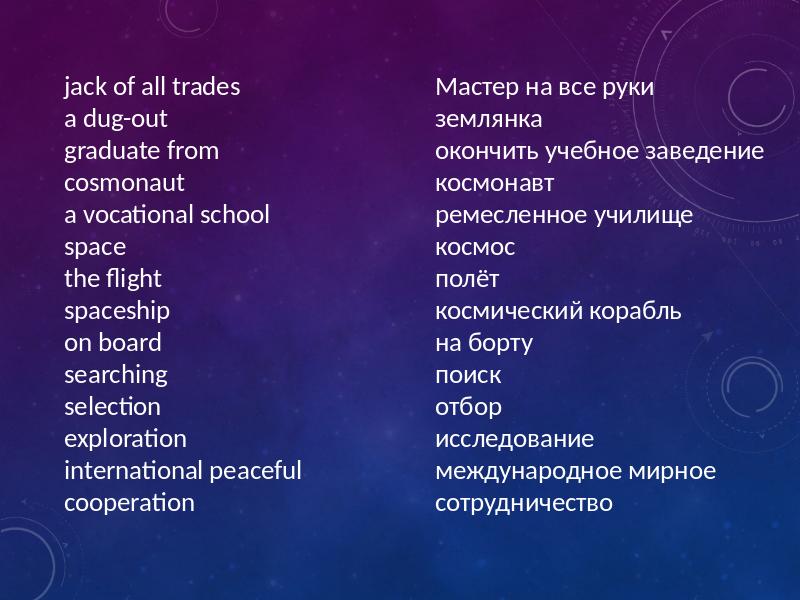 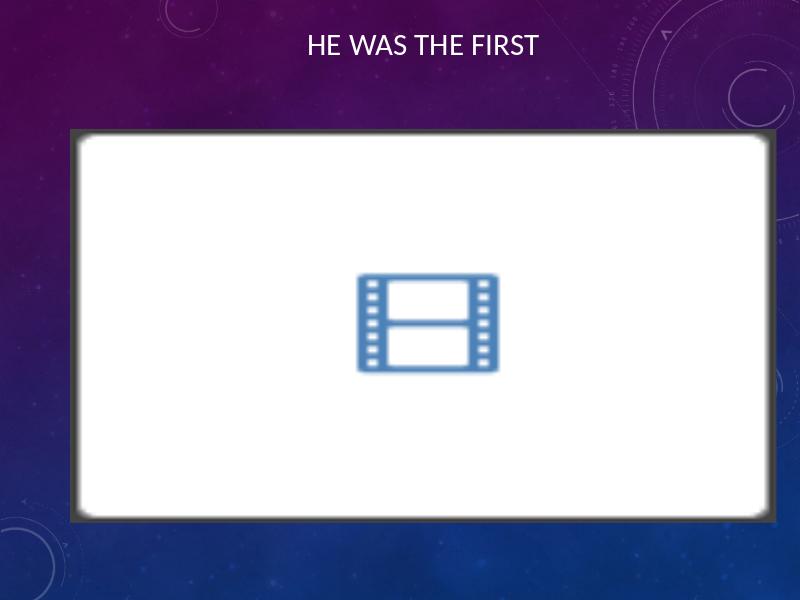 HE WAS THE FIRST 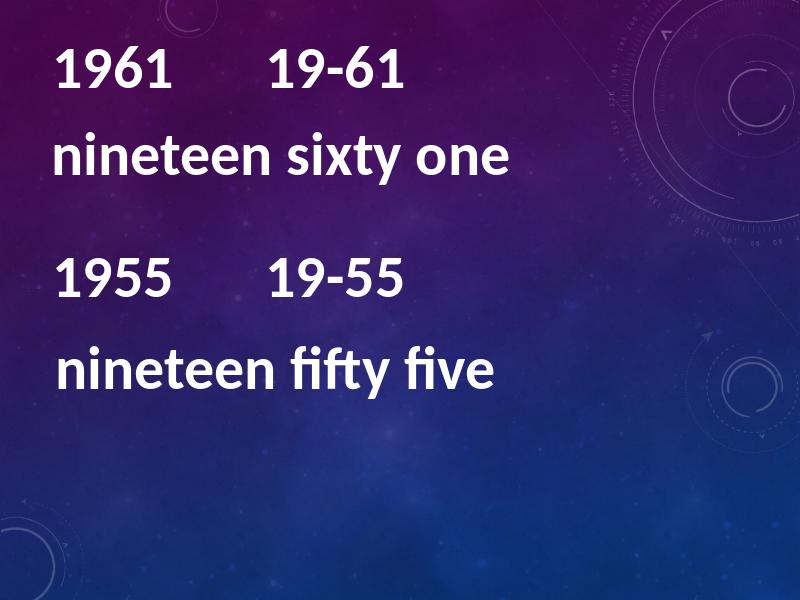 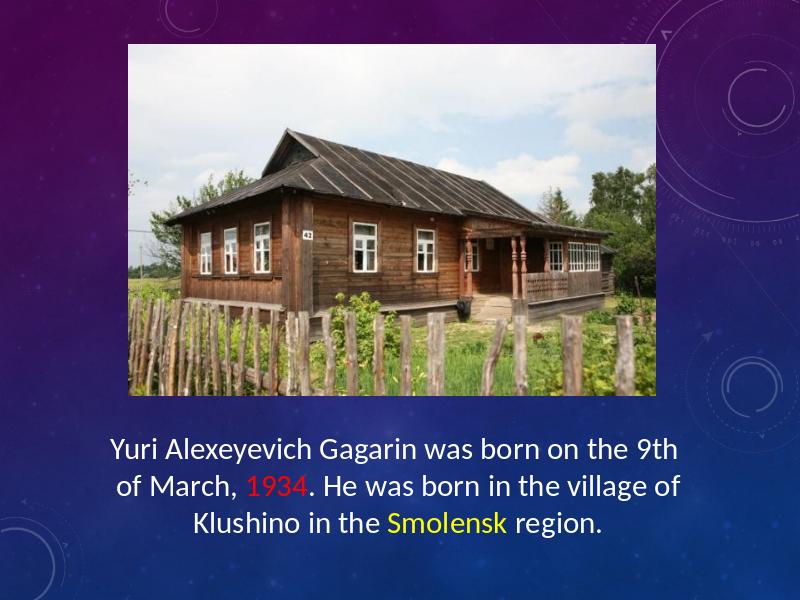 Yuri Alexeyevich Gagarin was born on the 9th of March, 1934. He was born in the village of Klushino in the Smolensk region. 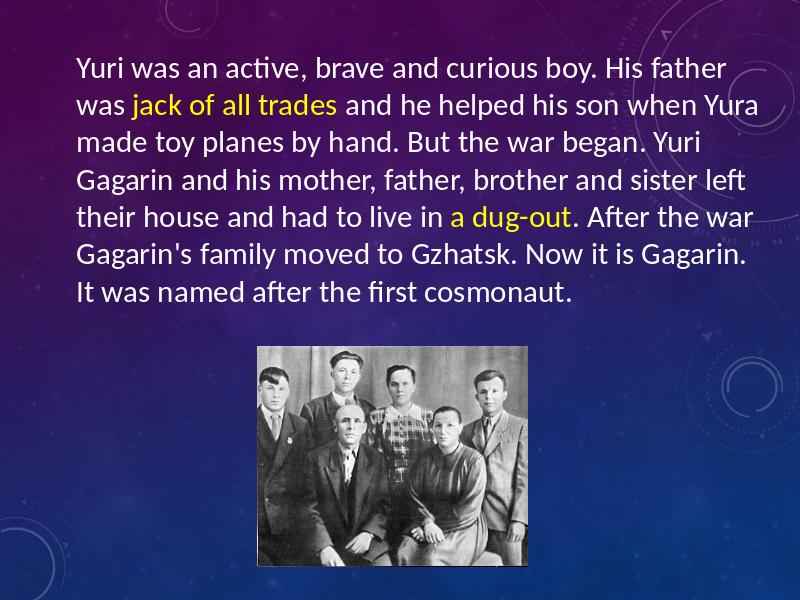 Yuri was an active, brave and curious boy. His father was jack of all trades and he helped his son when Yura made toy planes by hand. But the war began. Yuri Gagarin and his mother, father, brother and sister left their house and had to live in a dug-out. After the war Gagarin's family moved to Gzhatsk. Now it is Gagarin. It was named after the first cosmonaut. 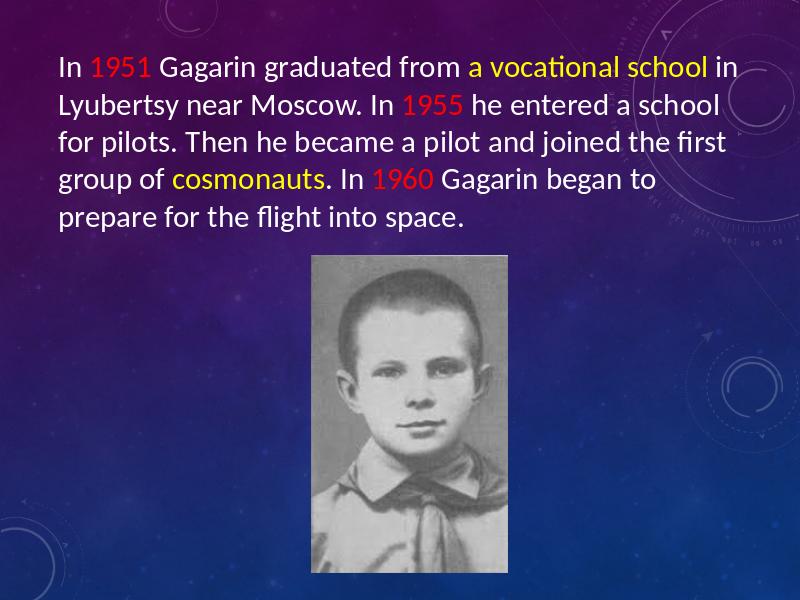 In 1951 Gagarin graduated from a vocational school in Lyubertsy near Moscow. In 1955 he entered a school for pilots. Then he became a pilot and joined the first group of cosmonauts. In 1960 Gagarin began to prepare for the flight into space. 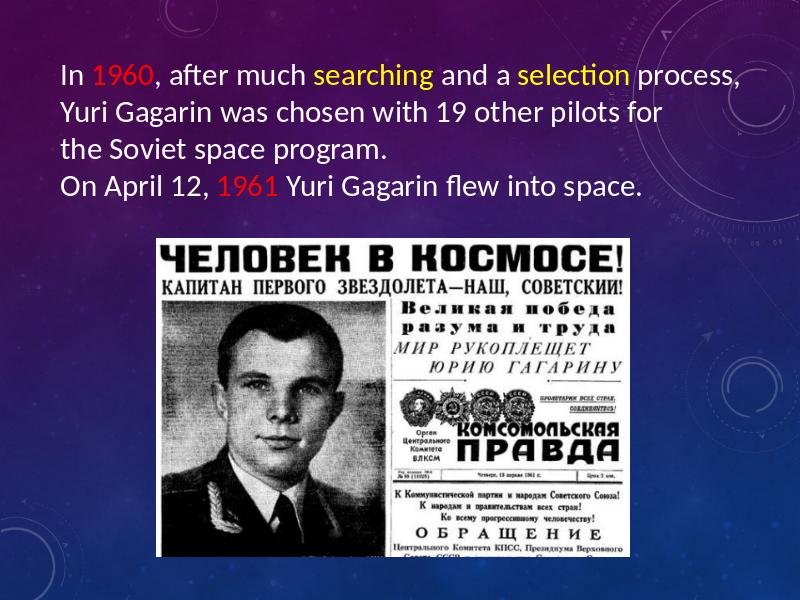 In 1960, after much searching and a selection process, Yuri Gagarin was chosen with 19 other pilots for the Soviet space program. On April 12, 1961 Yuri Gagarin flew into space. 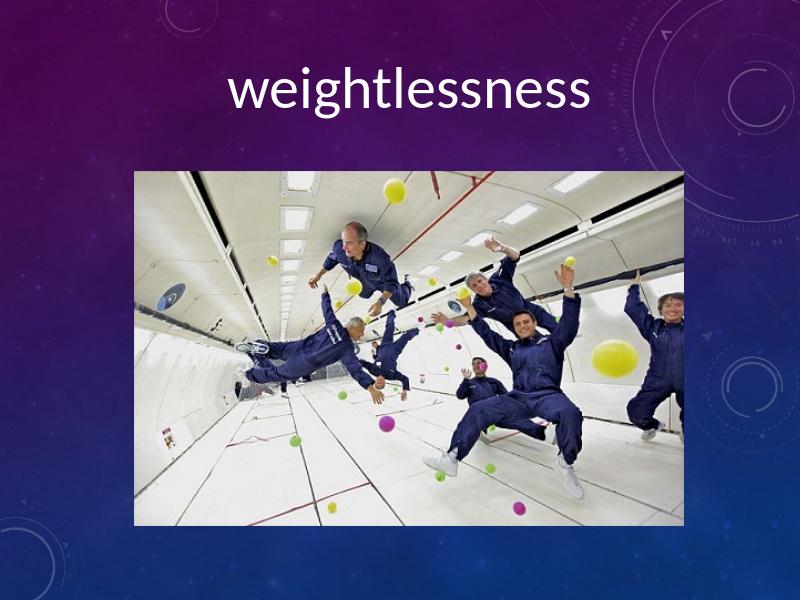 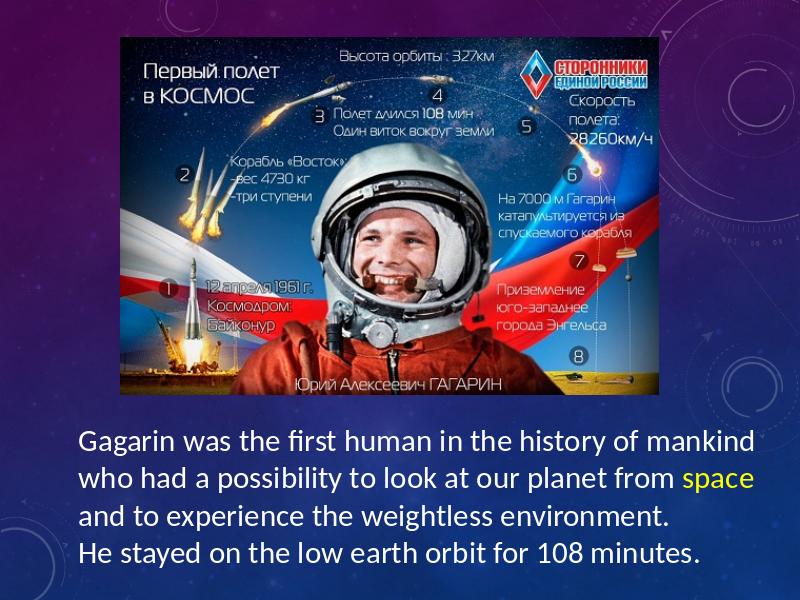 Gagarin was the first human in the history of mankind who had a possibility to look at our planet from space and to experience the weightless environment. He stayed on the low earth orbit for 108 minutes. 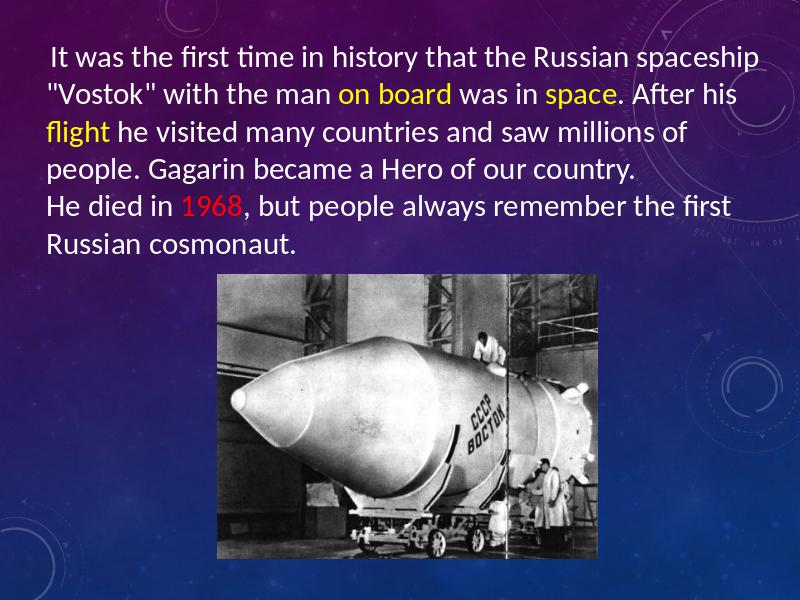 It was the first time in history that the Russian spaceship "Vostok" with the man on board was in space. After his flight he visited many countries and saw millions of people. Gagarin became a Hero of our country. He died in 1968, but people always remember the first Russian cosmonaut. 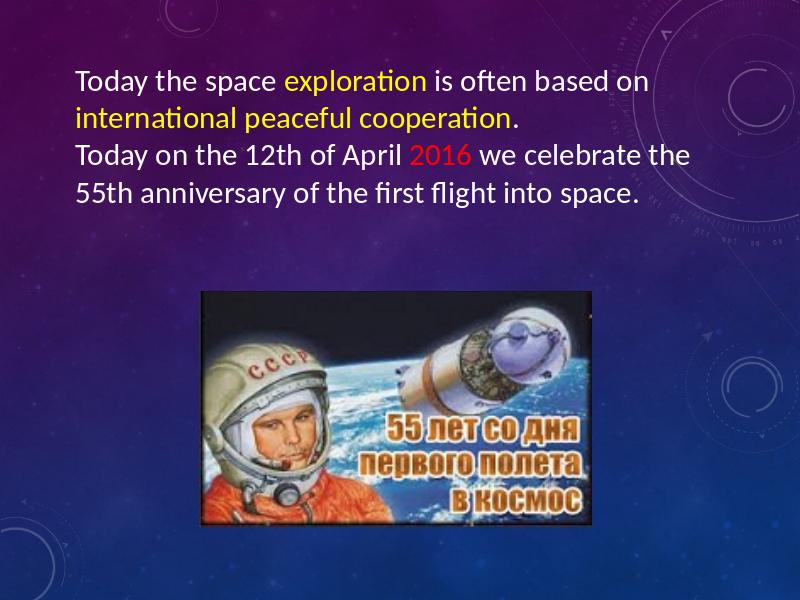 Today the space exploration is often based on international peaceful cooperation. Today on the 12th of April 2016 we celebrate the 55th anniversary of the first flight into space. 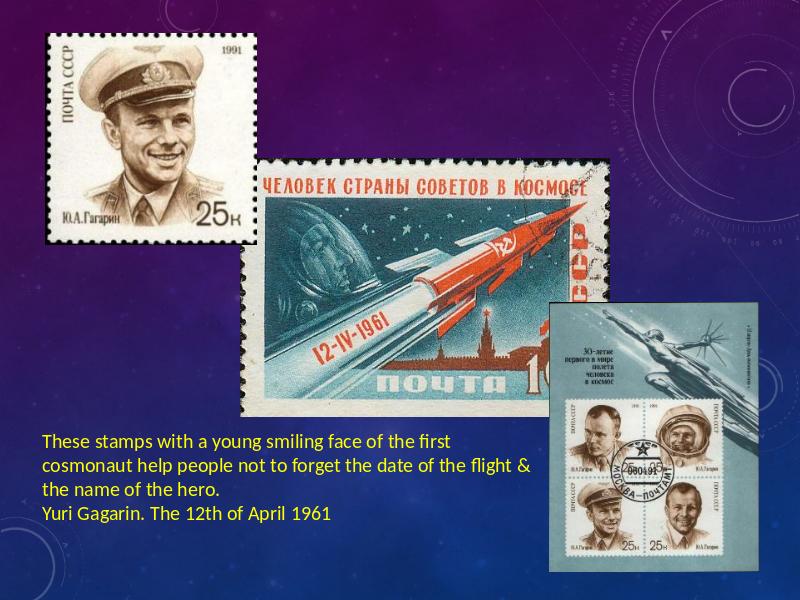 These stamps with a young smiling face of the first cosmonaut help people not to forget the date of the flight & the name of the hero. Yuri Gagarin. The 12th of April 1961 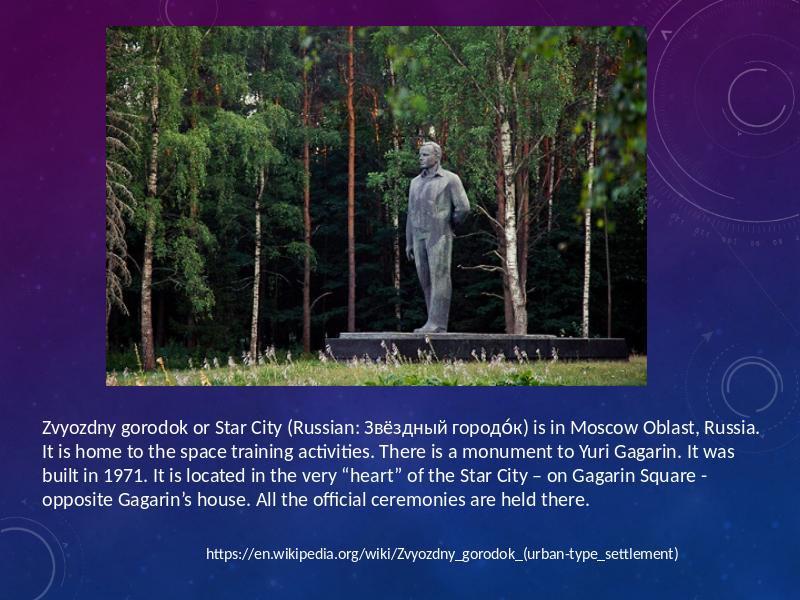 Zvyozdny gorodok or Star City (Russian: Звёздный городо́к) is in Moscow Oblast, Russia. It is home to the space training activities. There is a monument to Yuri Gagarin. It was built in 1971. It is located in the very “heart” of the Star City – on Gagarin Square - opposite Gagarin’s house. All the official ceremonies are held there. https://en.wikipedia.org/wiki/Zvyozdny_gorodok_(urban-type_settlement) 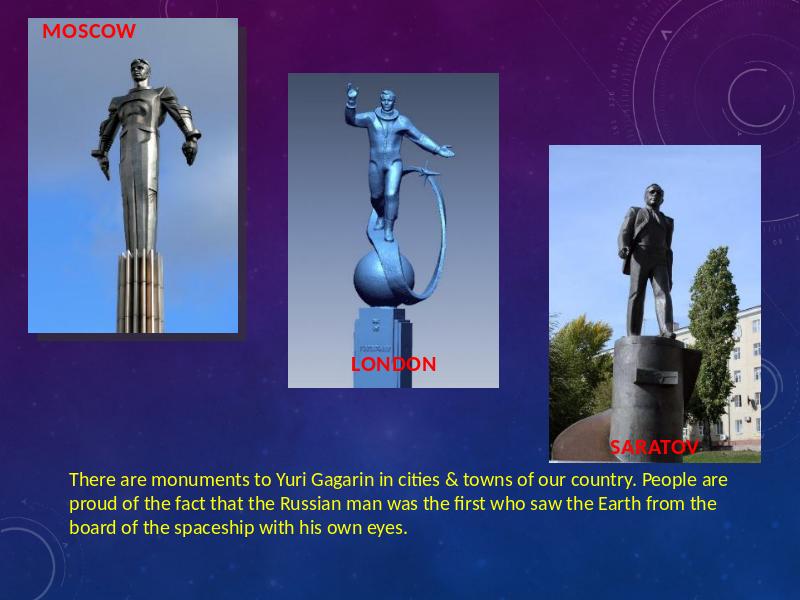 There are monuments to Yuri Gagarin in cities & towns of our country. People are proud of the fact that the Russian man was the first who saw the Earth from the board of the spaceship with his own eyes. MOSCOW LONDON SARATOV 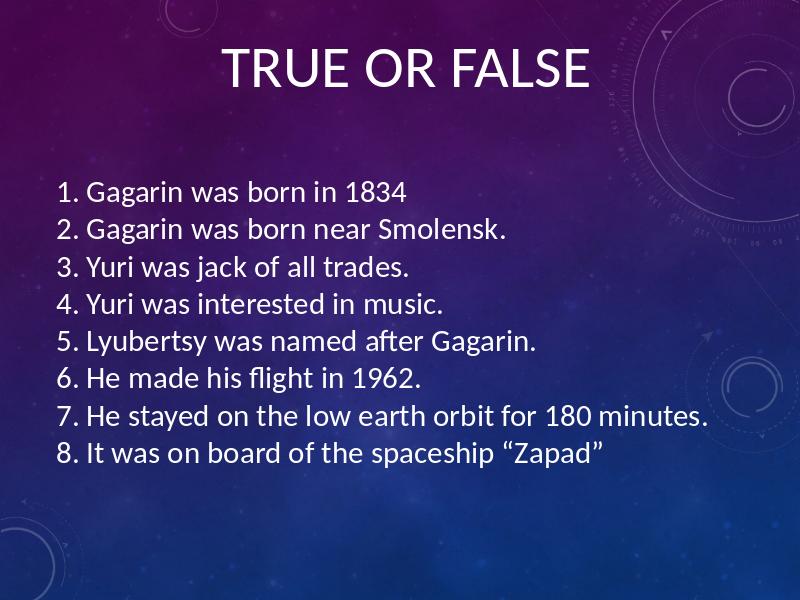 TRUE OR FALSE Gagarin was born in 1834 Gagarin was born near Smolensk. Yuri was jack of all trades. Yuri was interested in music. Lyubertsy was named after Gagarin. He made his flight in 1962. He stayed on the low earth orbit for 180 minutes. It was on board of the spaceship “Zapad” 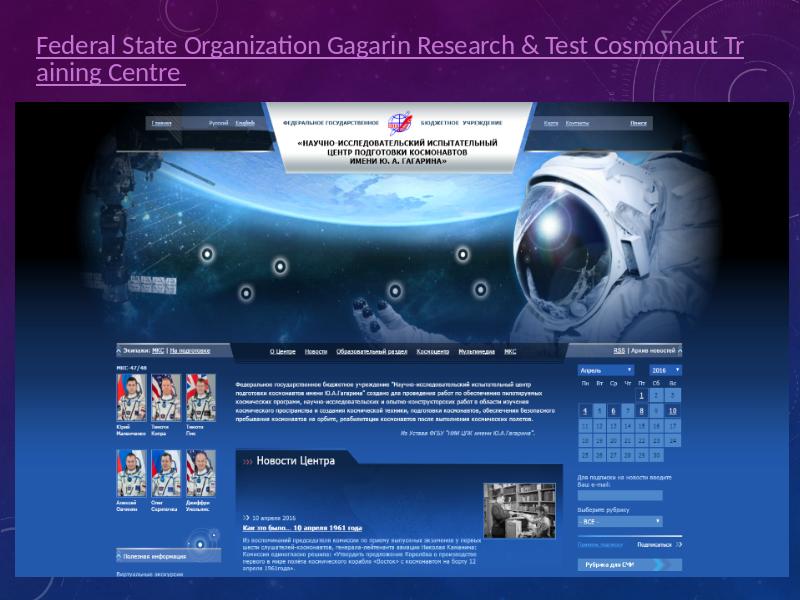 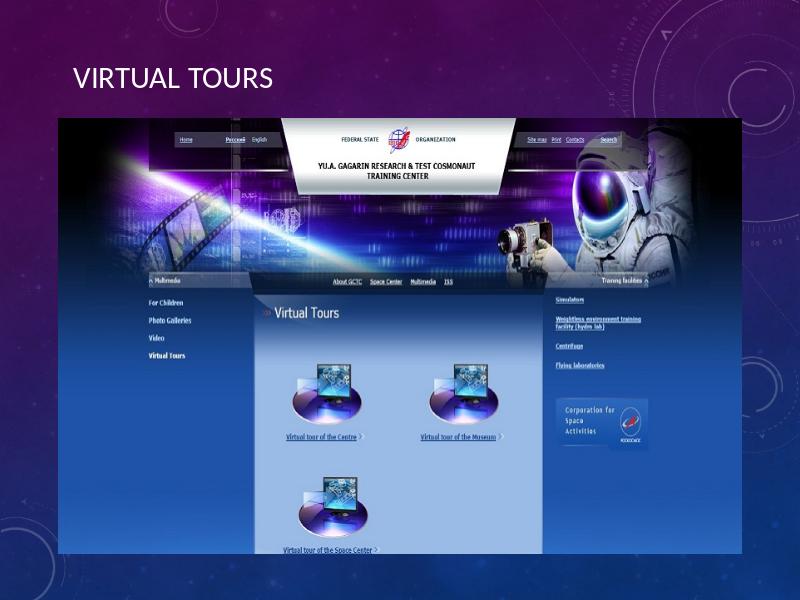 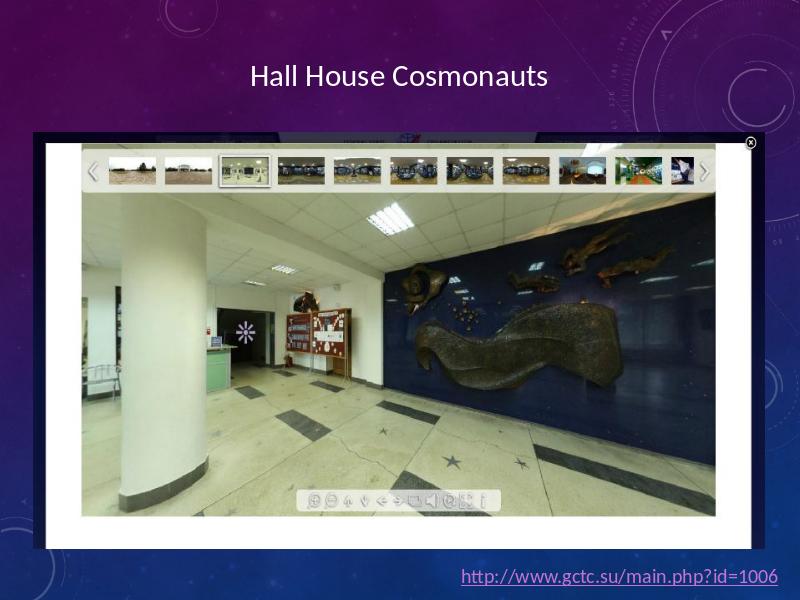 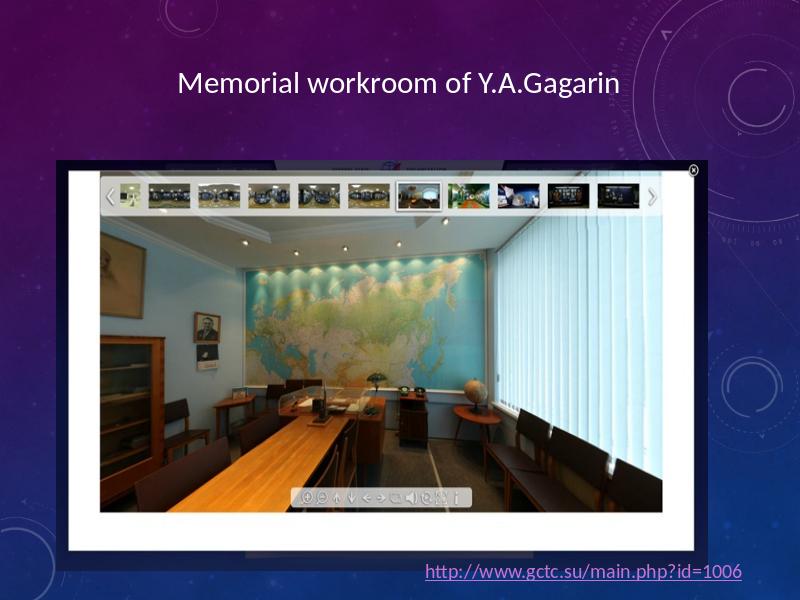 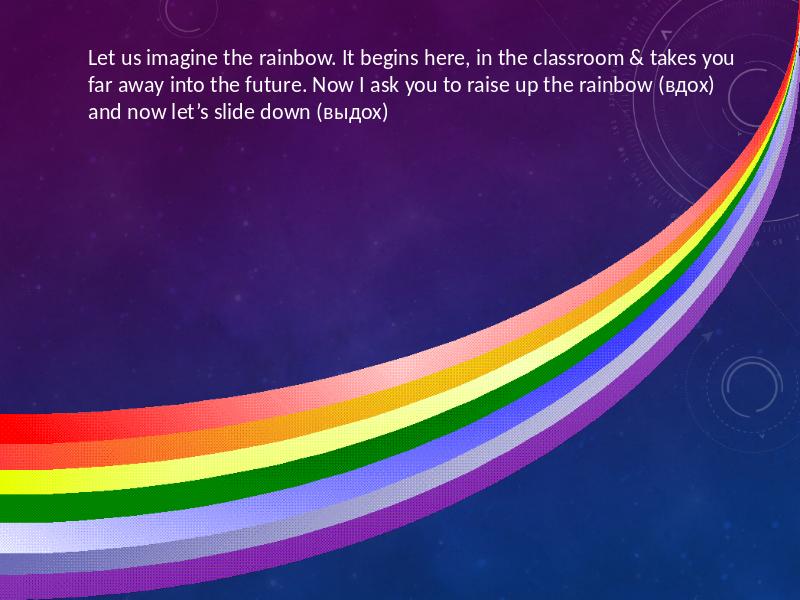 Let us imagine the rainbow. It begins here, in the classroom & takes you far away into the future. Now I ask you to raise up the rainbow (вдох) and now let’s slide down (выдох) 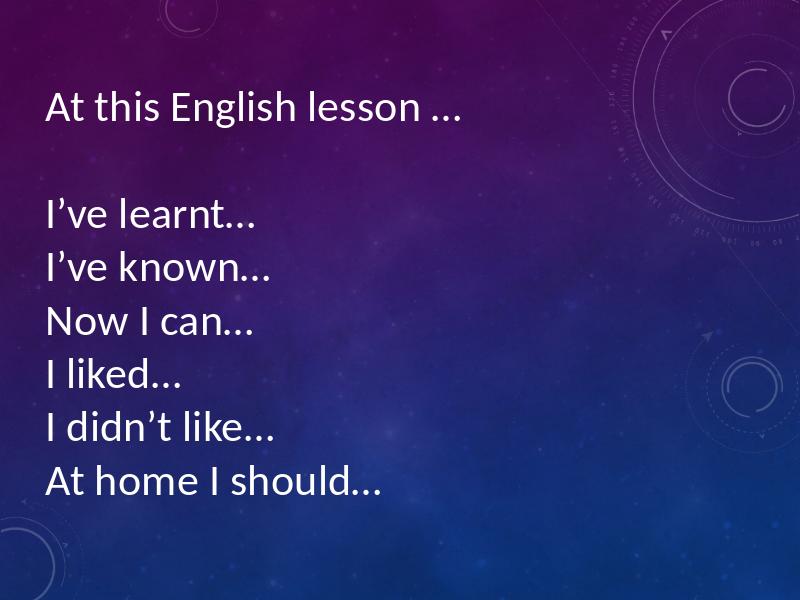 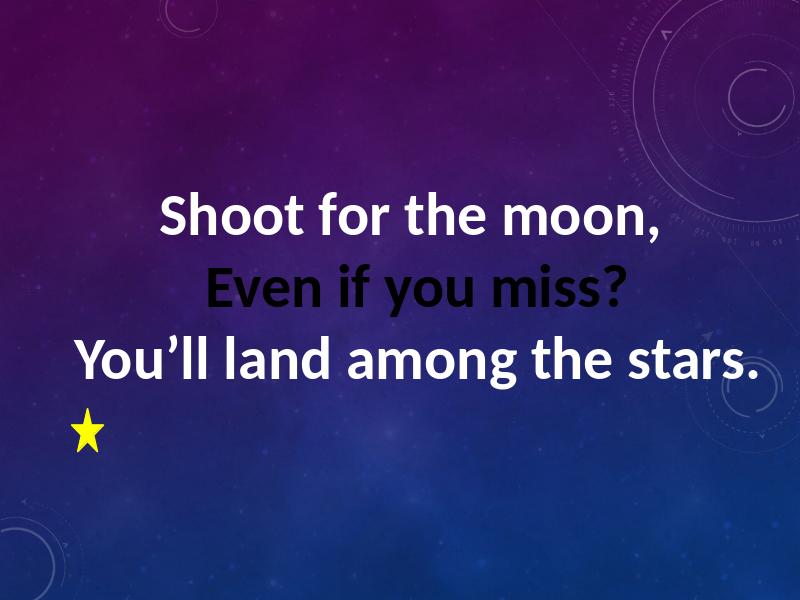 Shoot for the moon, Even if you miss? You’ll land among the stars.