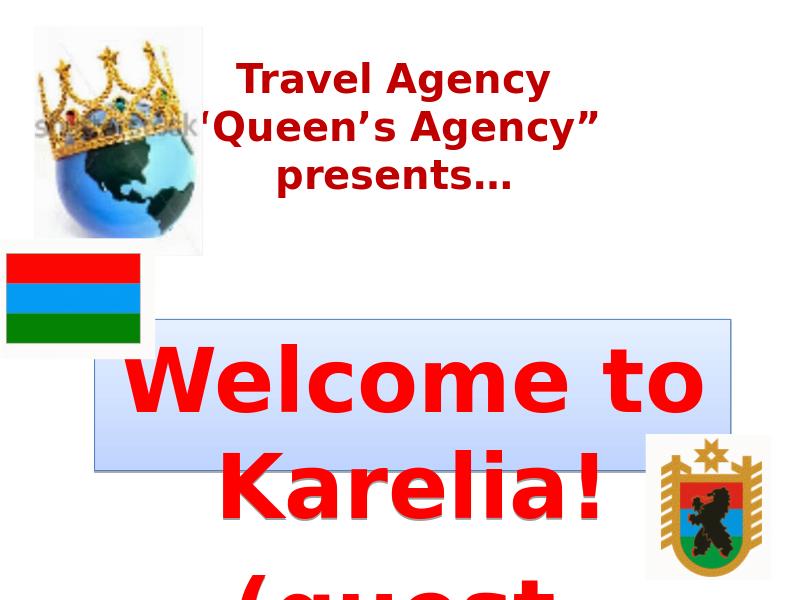 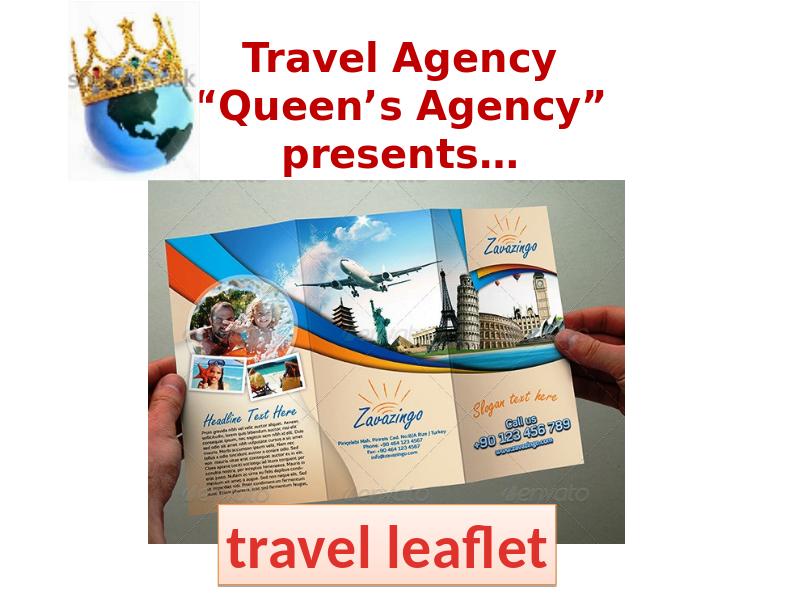 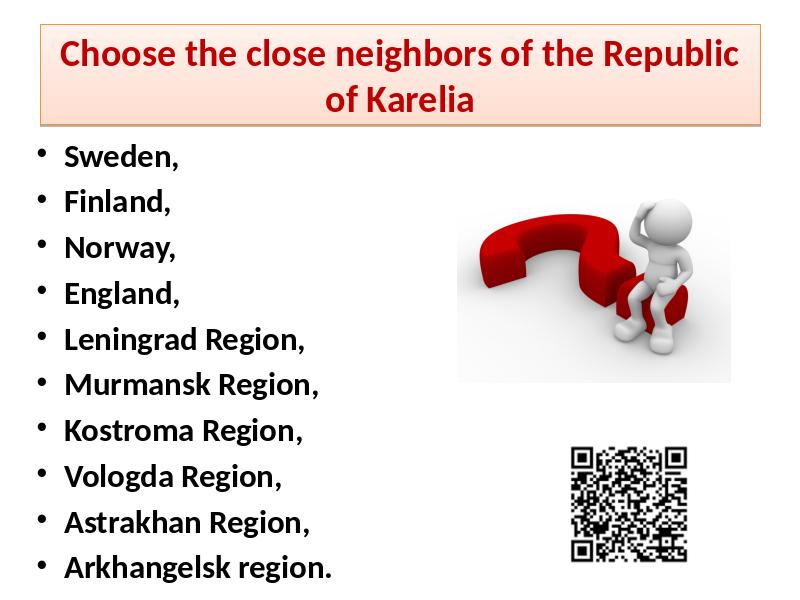 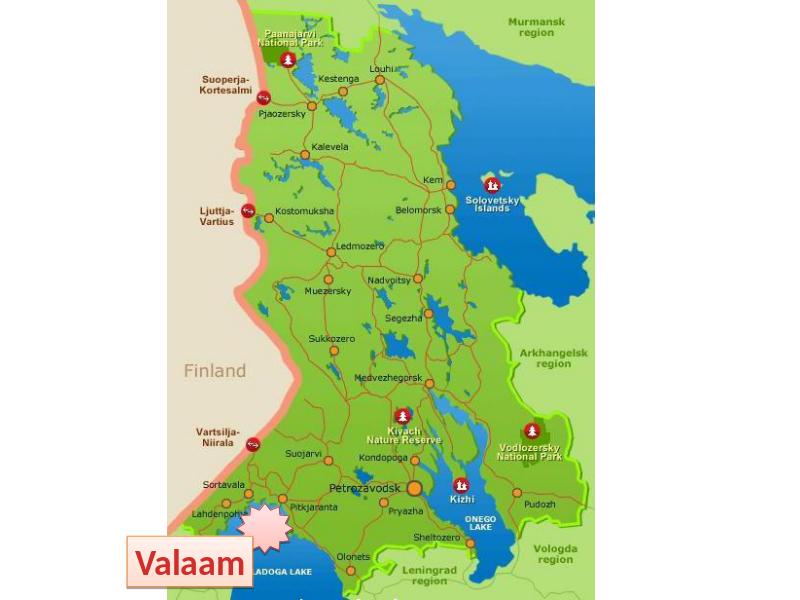 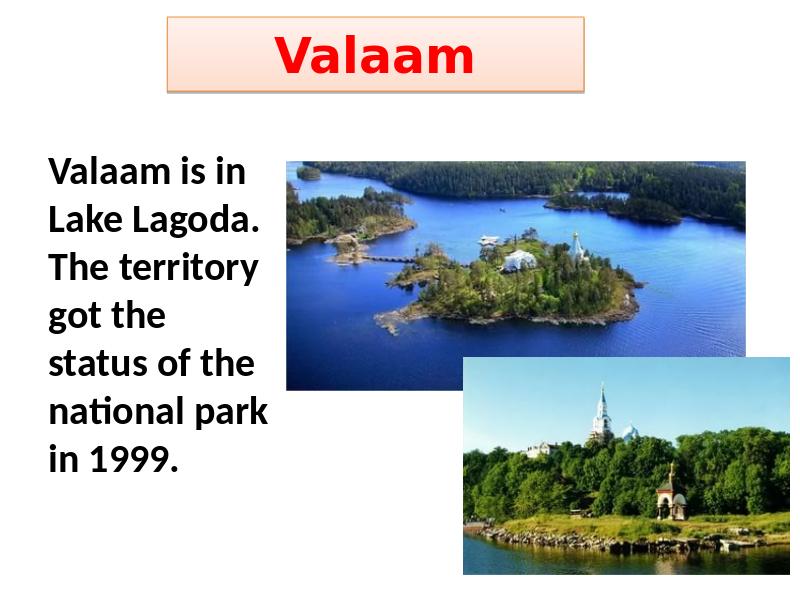 Valaam Valaam is in Lake Lagoda. The territory got the status of the national park in 1999. 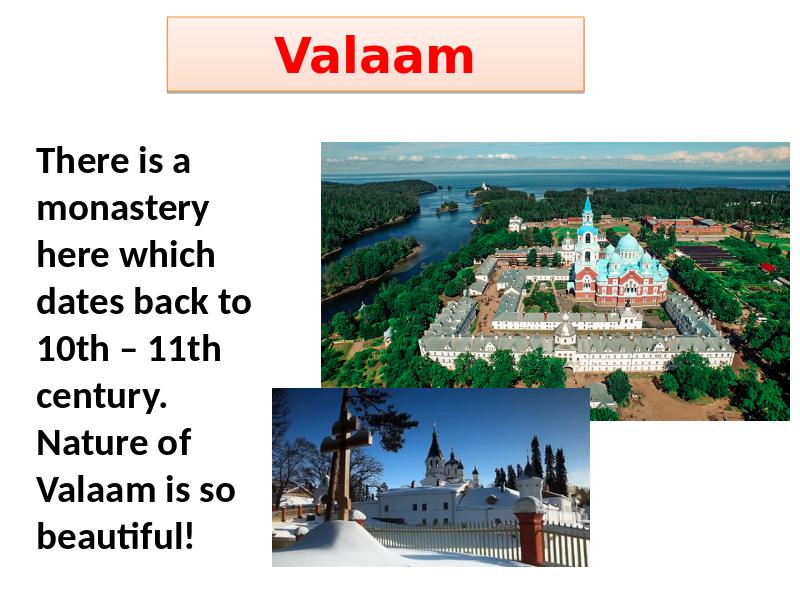 Valaam There is a monastery here which dates back to 10th – 11th century. Nature of Valaam is so beautiful! 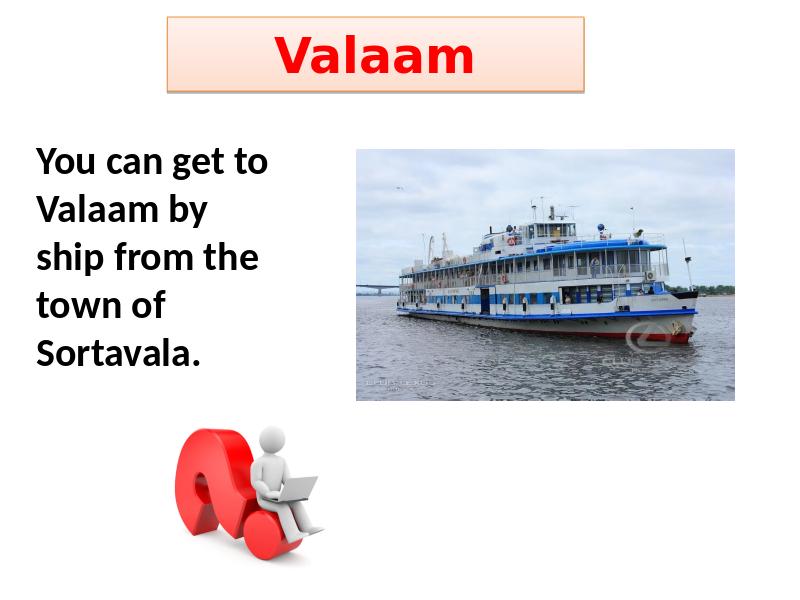 Valaam You can get to Valaam by ship from the town of Sortavala. 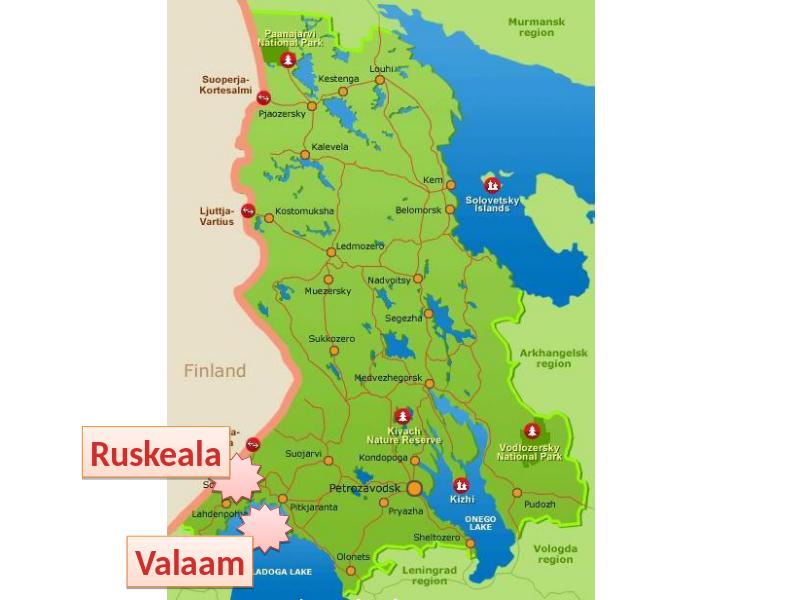 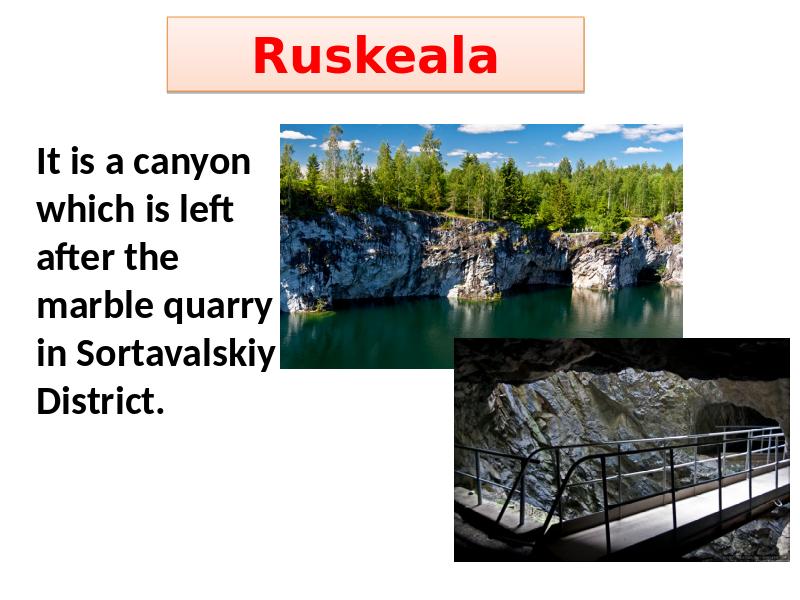 Ruskeala It is a canyon which is left after the marble quarry in Sortavalskiy District. 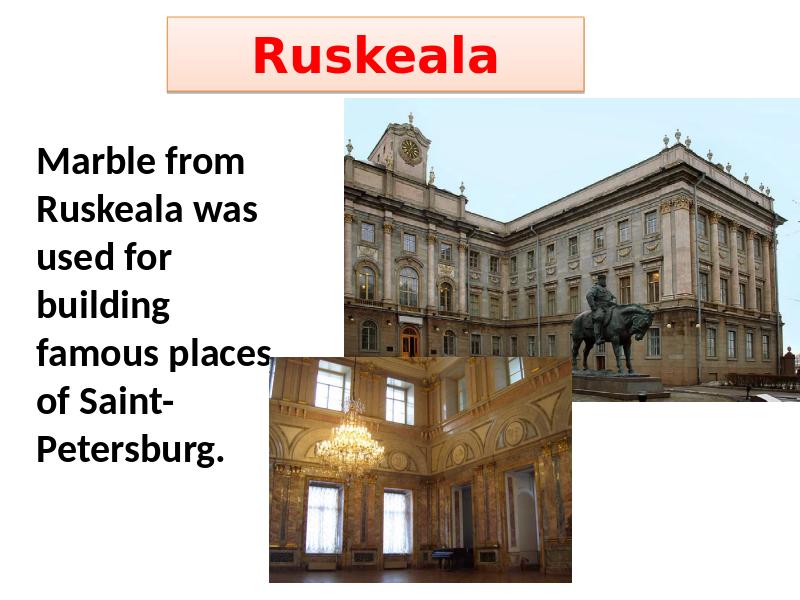 Ruskeala Marble from Ruskeala was used for building famous places of Saint-Petersburg. 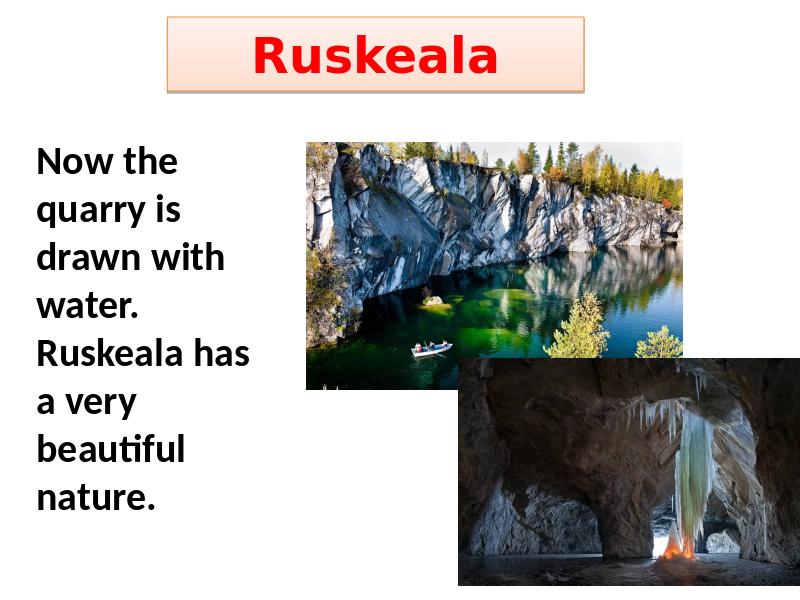 Ruskeala Now the quarry is drawn with water. Ruskeala has a very beautiful nature. 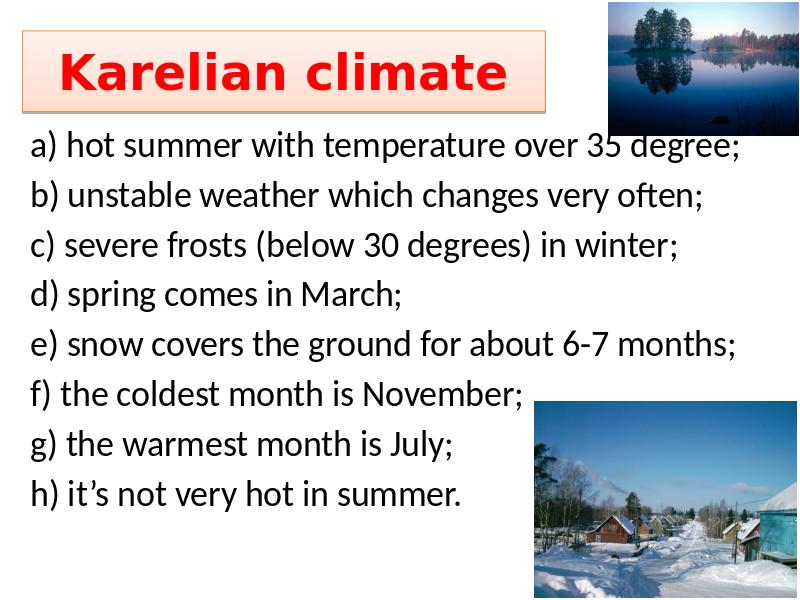 Karelian climate a) hot summer with temperature over 35 degree; b) unstable weather which changes very often; c) severe frosts (below 30 degrees) in winter; d) spring comes in March; e) snow covers the ground for about 6-7 months; f) the coldest month is November; g) the warmest month is July; h) it’s not very hot in summer. 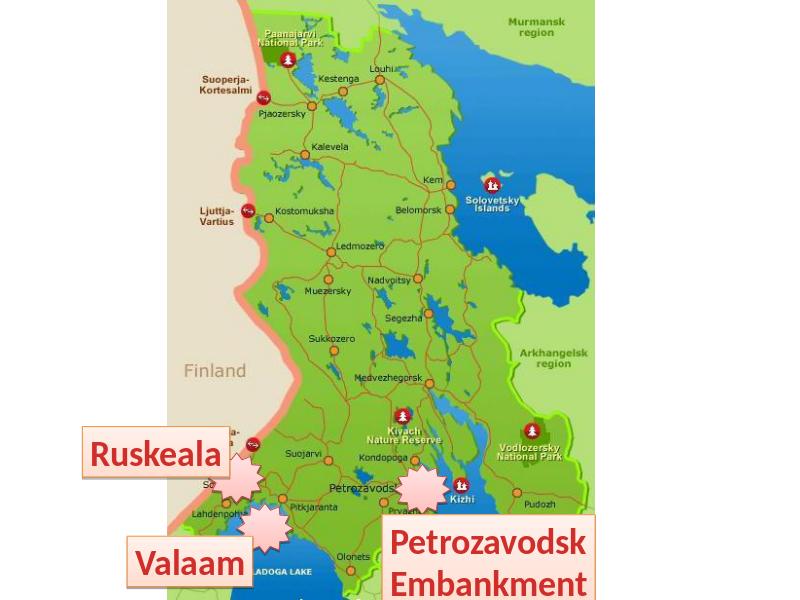 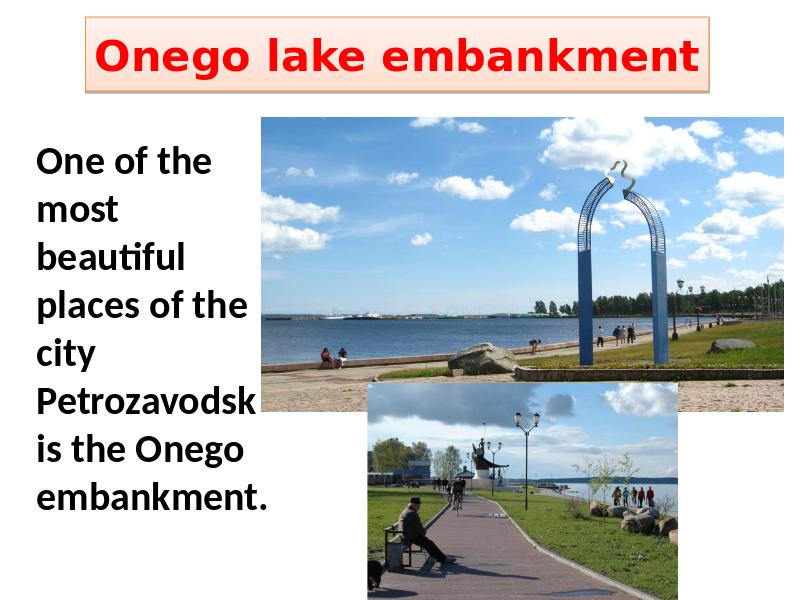 Onego lake embankment One of the most beautiful places of the city Petrozavodsk is the Onego embankment. 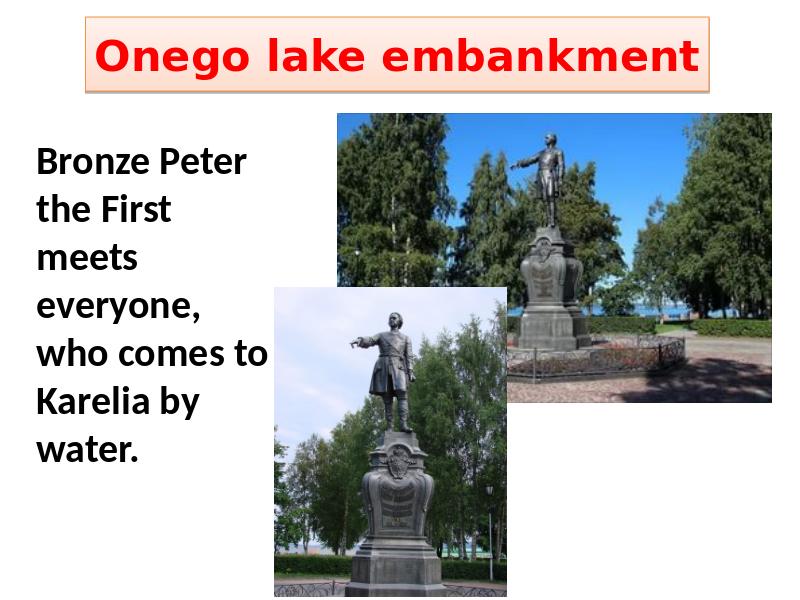 Onego lake embankment Bronze Peter the First meets everyone, who comes to Karelia by water. 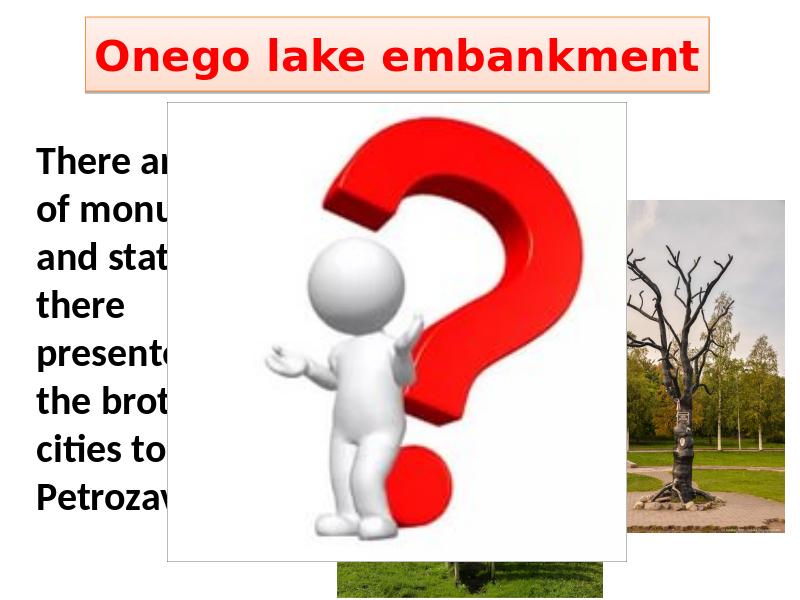 Onego lake embankment There are a lot of monuments and statues there presented by the brother-cities to Petrozavodsk. 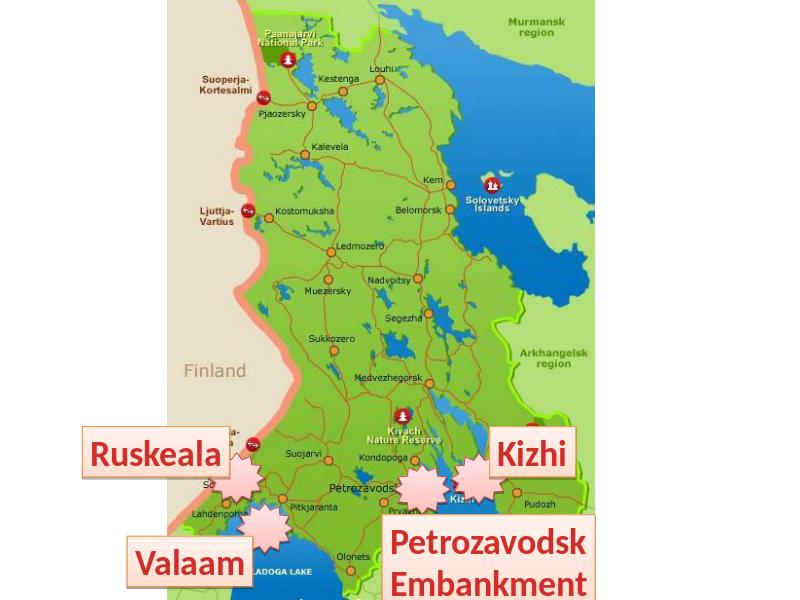 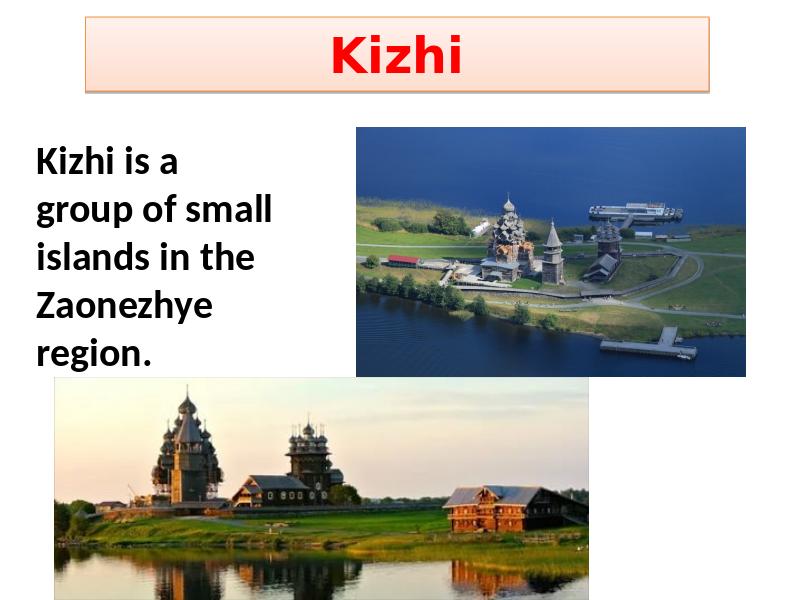 Kizhi Kizhi is a group of small islands in the Zaonezhye region. 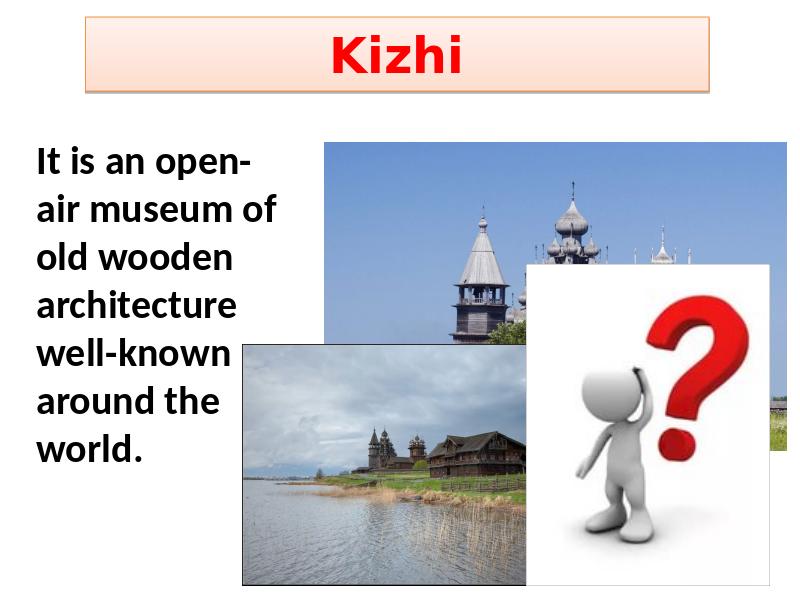 Kizhi It is an open-air museum of old wooden architecture well-known around the world. 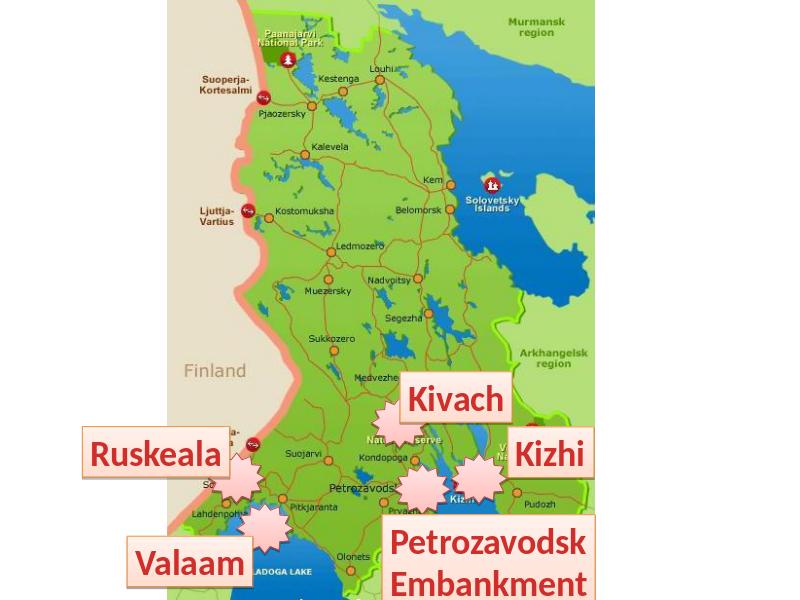 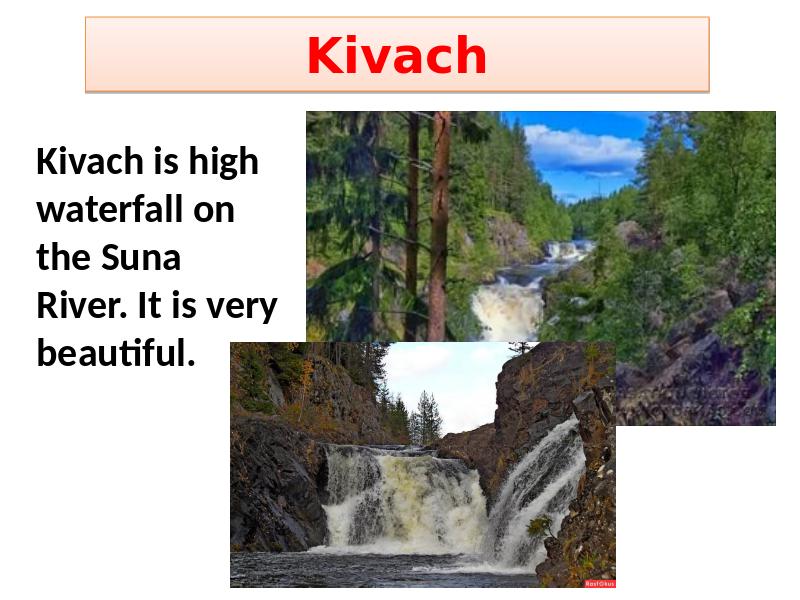 Kivach Kivach is high waterfall on the Suna River. It is very beautiful. 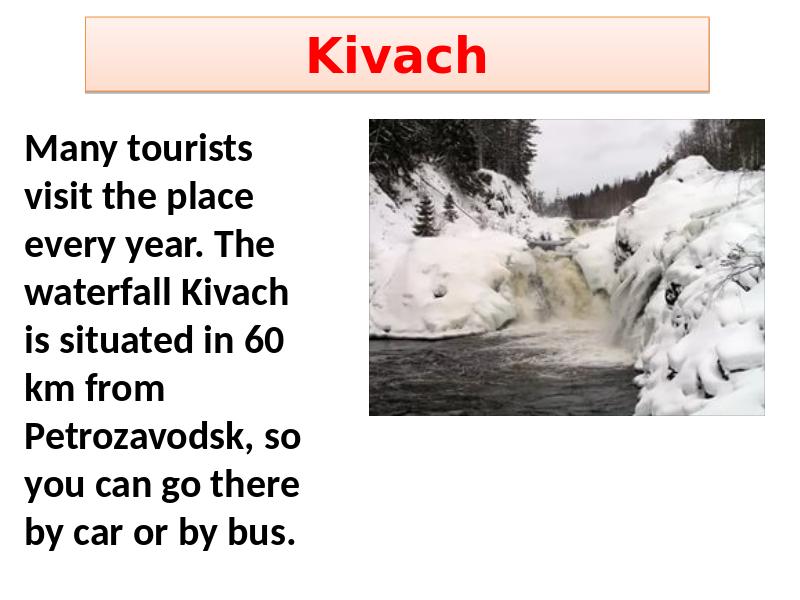 Kivach Many tourists visit the place every year. The waterfall Kivach is situated in 60 km from Petrozavodsk, so you can go there by car or by bus. 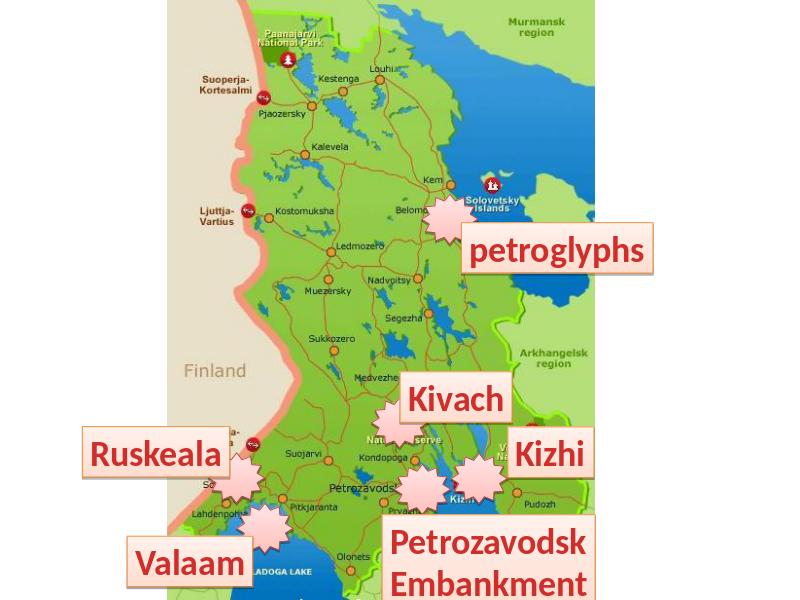 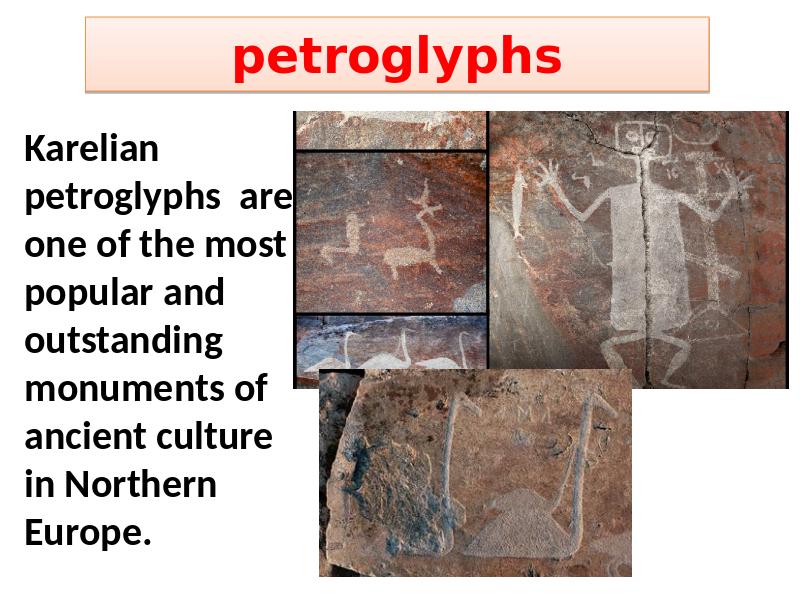 petroglyphs Karelian petroglyphs are one of the most popular and outstanding monuments of ancient culture in Northern Europe. 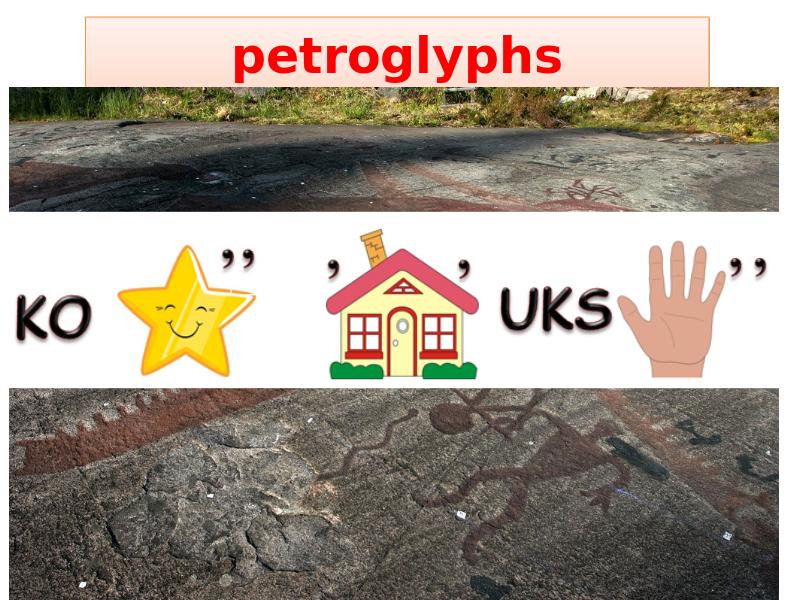 petroglyphs One of their location is in the White Sea area. Ancient people draw them hundreds of years ago. 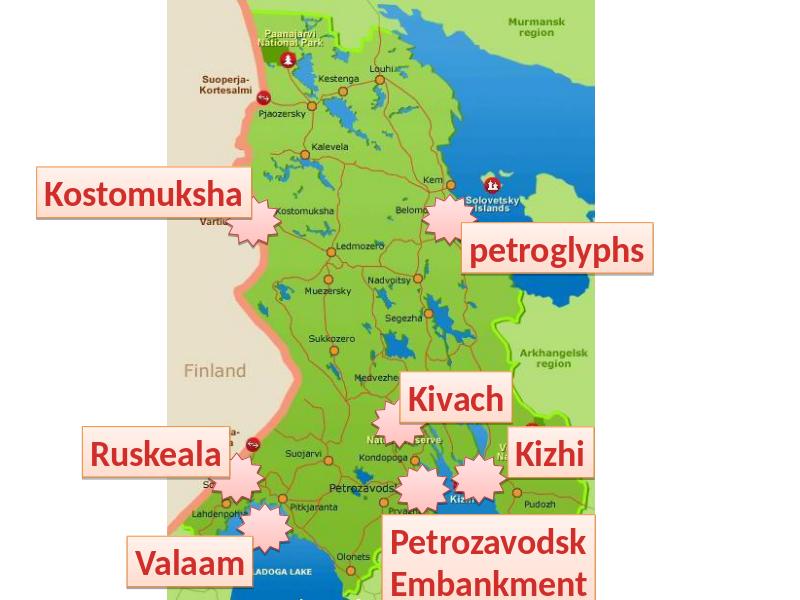 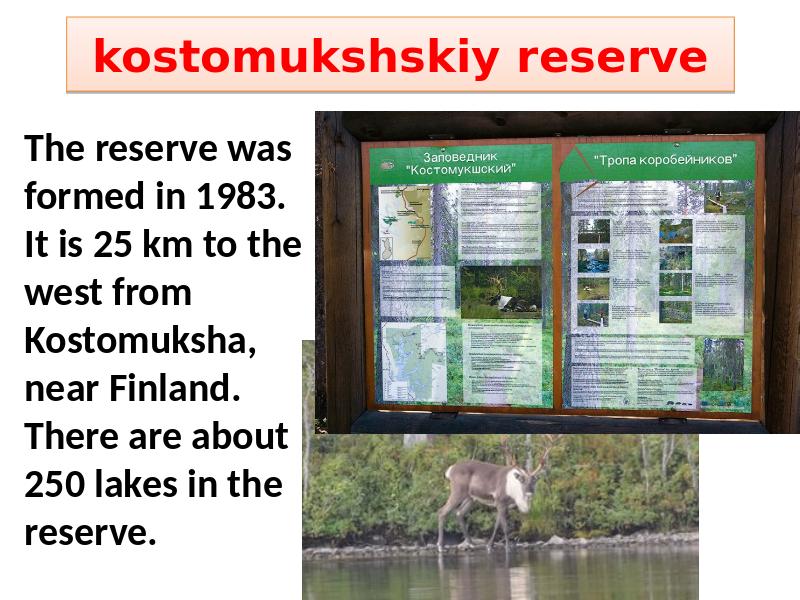 kostomukshskiy reserve The reserve was formed in 1983. It is 25 km to the west from Kostomuksha, near Finland. There are about 250 lakes in the reserve. 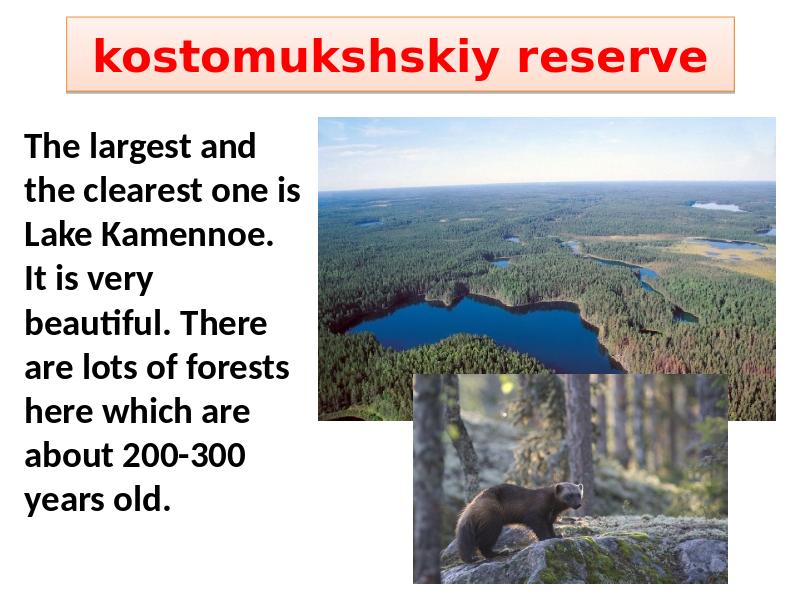 kostomukshskiy reserve The largest and the clearest one is Lake Kamennoe. It is very beautiful. There are lots of forests here which are about 200-300 years old. 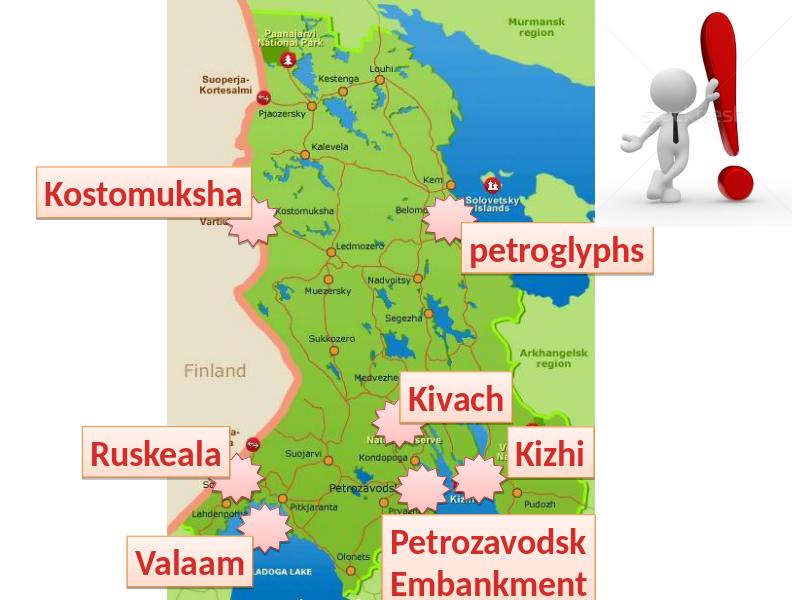