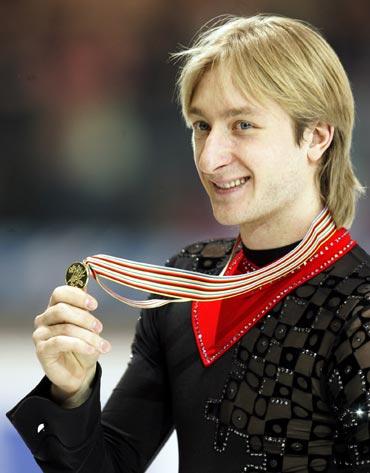 It was my dream when I was 4. I saw a competition and said to my mum, «I have to be there». I said that I wanted to be an Olympic champion. Now I have all the titles and I am really very happy.

Young Evgeni began life next to the railroad in a house his father built. He was a sickly child and, after Evgeni spent three months in hospital with double pneumonia, his parents decided to move to Volgograd.
When Evgeni joined his first skating group, his health quickly improved, but being the youngest meant he still had many difficulties to overcome. He used to cry when he fell on the hard ice, unable to get up again. However, Evgeni persevered and won his first competition when he was seven at the Crystal Skate Tournament in Samara.
Evgeni was obviously very talented, but his career almost ended in 1993 when the local ice rink closed. Although he was only eleven years old, Evgeni was determined to pursue his dream even if it meant living alone in St Petersburg. Training with Alexei Mishin, young Evgeni ignored the teasing from older kids as he learned how to perform the quad toe loop and the Biellmann spin.
In 1998, fifteen-year-old Evgeni won the World Junior Championships and finished 3'° in the Senior World Championships. A string of victories followed, and by 2006, Evgeni had won every major championship except one. Having recovered from a serious injury, Evgeni finally won the Olympic gold medal in Turin, setting new personal bests for each phase of the competition.
The dream has come true, but where will he go from here? For a true champion like Evgeni Plushenko, victory is only a beginning.

Read the text and mark the sentences as T(True), F(False).

1. Young Evgeni began his life next to the bus station in a house his father built.

2. His family consists of three people.

3. He has got a bulldog called Golden and a canary.

4. His parents decided to move to St Petersburg because he was a sickly child.
5. He won his first competition when he was seven at the Crystal Skate Tournament in Samara.
6. Evgeni was obviously very talented, but his career almost finished in 1993.

7. His trainer was Andrei Mishin
8. When he was ten years old, Evgeni won the World Junior Championships.

9. By 2006 Evgeni had won every major championship except one.

Read the text, then choose the correct answer (A,B or C).

1. Evgeni Plushenko was born on the…

b) «I want to be an Olympic champion».

b) with double pneumonia.

c) with a broken arm.

5. In Volgograd Evgeni joined his…

6. His career almost ended in…

7. He moved from Volgograd when he was…

a) the Olympic gold medal

b) the Olympic silver medal 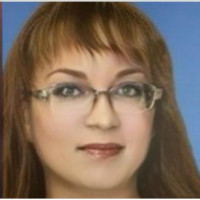